For decades, there have been reports by visitors and staff at George Washington's home of supernatural activity. Below are a number of Mount Vernon ghost stories staff have recorded over the years.

In the early years of the Mount Vernon Ladies’ Association, when the Ladies were at Mount Vernon they slept in the Mansion.

The following account was reported in the New York World newspaper ca. 1890.

"Of course, the most interesting of all the bedrooms is the one belonging to the immortal George and in which he died. In it is the original four-poster bed whereon Washington passed his last moments." 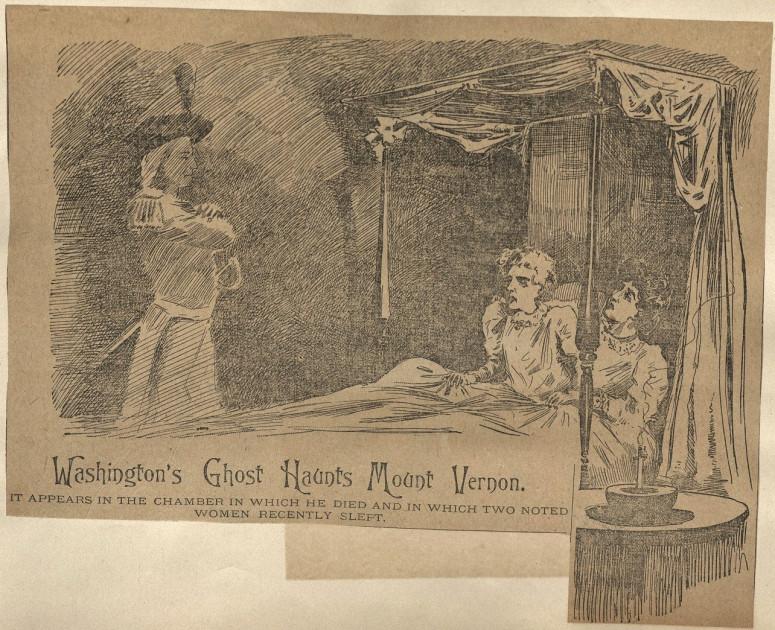 "This historic chamber is haunted; of that there would seem to be little doubt. Many people within recent years have slept in it, and they declare that they were awed by the viewless presence of the nation’s first President. They deny earnestly that the notion is based on imagination. Few of these temporary occupants have been able to get any sleep. Obviously, it is one thing to see a ghost, and quite another thing to feel one-to be aware of the nearness of a strange and brooding spectre. They all agree that Washington visits his chamber in the still watches of the night."

"Mrs. William Beale and a friend of hers spent a night at Mount Vernon. At their own request, they were permitted to occupy Washington’s bedroom. In the middle of the night they were awakened by the sputtering of their candle. They had had lighted one surreptitiously and were burning it in the middle of a basin of water."

"Fancied they saw a spook. It went out with a noise, and they began to feel alarmed. Mrs. Beale said to her friend: 'You are on the side of the bed where Washington died!' The other replied: 'No, I’m not; he died on your side!' Finally they decided that the question was doubtful, and there was no more sleep for them that night. They got up dressed themselves, and sat around until morning, scared by every squeak of the windows and at one moment were sure they heard Washington’s sward clank distinctly in a corner."

In this episode of Conversation at the Washington Library, we take a spook-tacular tour of Mount Vernon's history, featuring stories and voices from across the ages.

A Woman on the Stairs

During a typical day at work, ca. 1980s, while stationed in the Central Passage, something caught an interpreter's eye.

She saw the figure of an unidentified woman, dressed in 18th-century clothing, on the stairs. The figure was carrying a large punch bowl filled with a flower arrangement. The figure disappeared upon reaching the bottom of the staircase.

An interpreter was in the Central Passage, on a particularly crowded day in the spring or summer ca. 1980s.

She thought she heard someone in the room behind her. Thinking that a visitor had gotten into the area by going under the rope barriers, she entered the Little Parlor to shoo them out. Much to her surprise, she found an older gentleman, sporting a large mustache and dressed in late 19th or early 20th-century clothing, with his sleeves rolled up and secured with garters.

When he saw that he had her attention, he shouted, “What the hell is going on here?”—a reference to the noise a school group or groups were making. The interpreter told him that she was trying to quiet them down and then the man disappeared. She later saw a portrait of the gentleman in question, Colonel Harrison Howell Dodge, Mount Vernon’s director for about 50 years, until his death in the late 1930s.

A Flurry of Skirts

An interpreter was standing in the Central Passage, ca. 1980s.

She felt something brush past her, coming out of the Little Parlor. Looking down, all she could see were the feet and bottoms of the skirts of a young girl in an 18th-century dress, running across the Central Passage.

Putting Away His Horse

A head guard said that these events were not a one-time incident, but happened with great regularity, ca. 1980s-1990s.

This man's explanation was that the General was coming home, made his horse comfortable, and then went up to his room.

My first experience with something that I cannot explain occurred in the Mansion during the early years of the Candlelight Tours. The event took place on the anniversary of General Washington’s death around 10:30 pm. After the house had been cleared I locked myself in. It was my responsibility to check the alarms for their proper positioning. When I was in the Mansion Study I heard a heavy set of keys being walked across the floor in the Washington bedroom directly above. As I approached the back stairs to go up to the Washington bedroom the sound of the keys abruptly stopped.

General Washington was well known for his heavy set of keys and that they could be heard as he walked through the house. Tobias Lear, the General’s secretary is known to have taken the keys from the general’s pocket upon his death and turned the keys over to his enslaved manservant Christopher Sheels.

A 2006 supervisor from the History Interpretation Department recalls her first encounter.

My first encounter with a ghost occurred in the Yellow Room of the Mount Vernon Mansion in 2006. I was a Supervisor in the History Interpretation Department – Supervisors clear and lock the Mansion after checking and rechecking for assurance that no one has been left in the Mansion after hours. After letting the last interpreter out the Study door, I walked up the backstairs, past the Washingtons’ bedchamber, and into the Yellow Room. I suddenly felt myself being pushed, feeling the pressure of someone’s hands on the back of my shoulders. I turned to look and no one was there. It was obvious I wasn’t wanted in the Yellow Bedchamber.

This happened several more times and I decided I would not go back upstairs if alone. I invited another interpreter to stay with me and travel the backstairs to the Yellow Room – nothing happened. The next time when I was alone I was once again pushed through the room.

To keep this from being disturbed, I felt it was best that I not use the backstairs but to remove my shoes and cross through the downstairs bedchamber to the Central Passage and lock the door for the evening.

A Ghost at the Tomb

an interpreter from 2006, explains what happened to her at George Washington's Tomb.

The first time I experienced this “ghost” was Easter morning in 2006 when I was scheduled to open Washington’s Tomb. It was early and very quiet and there was no one around - the guests had not made their way from the Mansion. I stood in front of the open door and I saw an ectoplasm in the far right corner of the Tomb. When I moved, the ectoplasm moved. I watched as it became a blur in my vision and it continued to move around. I took a photo that showed a streak of light through the blur. The second photo showed the blur. As soon as voices of the guests coming down the hill could be heard, the ectoplasm disappeared. This happened on three different occasions.

A Woman from the Civil War

Originally my office was located in the Teacher Resource Center of the Education Center which is now Be Washington. It was after hours and the staff had left. I gathered my coat and bag and set them on the table facing my desk – as I turned to put on my coat, I saw a female figure standing in the door of my office.

She was dressed in clothing from the Civil War period and she was totally grey – her complete body and clothing were grey. She stood in the doorway looking straight ahead without moving – her stare was very stern. It happened quickly and then she was gone. There was no doubt in my mind that Ann Pamela Cunningham, founder of the Mount Vernon Ladies' Association, had been in the room.

I stayed for a while, sitting quietly as I listened to the noises of cabinet doors opening and closing in Hands-on-History, but when I looked to see who was there, the room was empty.

Wandering in the Night

One night, in the ca. 2010s, a couple of security officers were driving around the Mount Vernon grounds very late at night.

They saw a little girl on the path ahead of them. So they stopped suddenly. Then the girl appeared right next to them. They quickly spun around and drove away as fast as they could.

A Candle in the Night

A character interpreter tells what she experienced inside the Mansion in 2017.

I’ve worked at Mount Vernon on and off since 2004. I most recently returned in January 2017. The estate was abuzz with the latest spooky story. On December 15, 2016, some strange sounds were heard coming from the third floor and there had been reports of the temperature dropping by 20 degrees. When the tale was shared with me I was determined to see if it would happen again.

On December 14, the anniversary of the General’s death, I was on the third floor waiting for some haunting but nothing happened. However, when I returned the next night the vibe in the area had changed. Upon looking into the southwest bedchamber I noticed an electric candle was on. “That’s strange,” I thought, “It was dark last night.” Had Collections come and turned it on? Not likely; the third floor isn’t open to the public. Then it hit me. George Washington died on December 14, 1799, and the next day Martha Washington shut up the bedroom they shared. And moved to the southwest bedchamber. Apparently, she’s still marking that sad day. 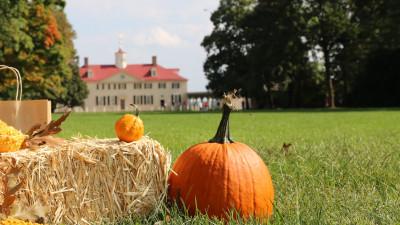 Learn more spook-tacular stories from Mount Vernon's history in this episode of Conversation at the Washington Library.