The brick stable at the foot of the south lane at Mount Vernon was built in 1782, replacing a stable of frame construction on the same site that was destroyed by fire the previous year. The stable was reserved for the use of the family coach and saddle horses, as well as those of the hundreds of people who visited Mount Vernon each year. These extra animals were a financial burden and greatly increased the workload of the enslaved workers at the stable. 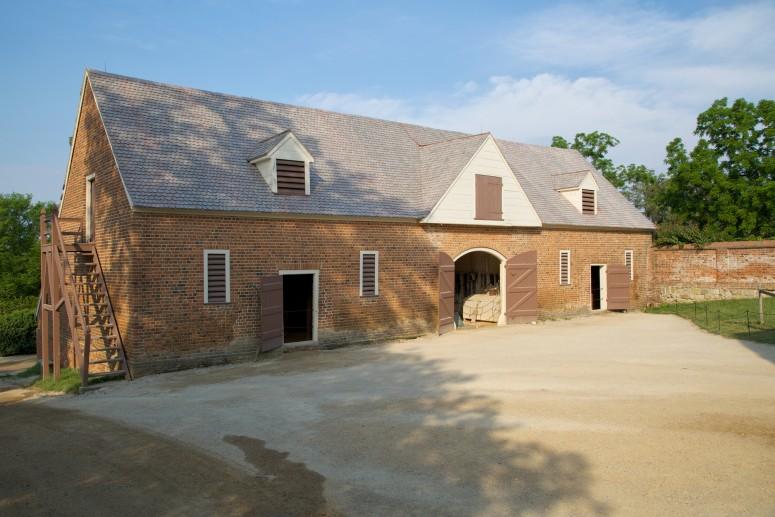 When at home George Washington enjoyed participating in fox hunts, he owned a pack of foxhounds and hunted frequently with his neighbors while on horseback. George Washington's contemporaries frequently testified to his outstanding ability as a horseman. Thomas Jefferson even considered Washington "the best horseman of his age."1 The coach house and the coach compartment of the stable housed the family coach and a lighter vehicle, a chaise, which was a two-wheeled chair. From 1768 until the end of his life, Washington maintained a succession of fashionable carriages. None has survived. The coach in use at the time of Washington's death was purchased by Martha Washington's grandson. A later owner dismantled it and distributed the parts among his friends as souvenirs of the original owner.

Behind the stable is a shed like extension where mules were tethered without being confined to stalls. Beginning with a male jackass named Royal Gift, a present from the King of Spain, an intensive breeding program was carried out under the eye of a slave named Peter Hardman. The results are evident in two inventories of Mount Vernon livestock: one taken in 1785 listed 130 working horses and no mules, the second, taken in 1799, the year of Washington's death, recorded twenty-five horses and fifty-eight mules.