In 1774, George Washington began the construction of a private wing of the Mount Vernon mansion to provide additional living space and increased privacy. The wing's first floor included a sizeable study to allow space for the storage of Washington's surveys, papers, and ever-increasing collection of books, as well as a spot in which to conduct the business operations of his extensive plantation lands. 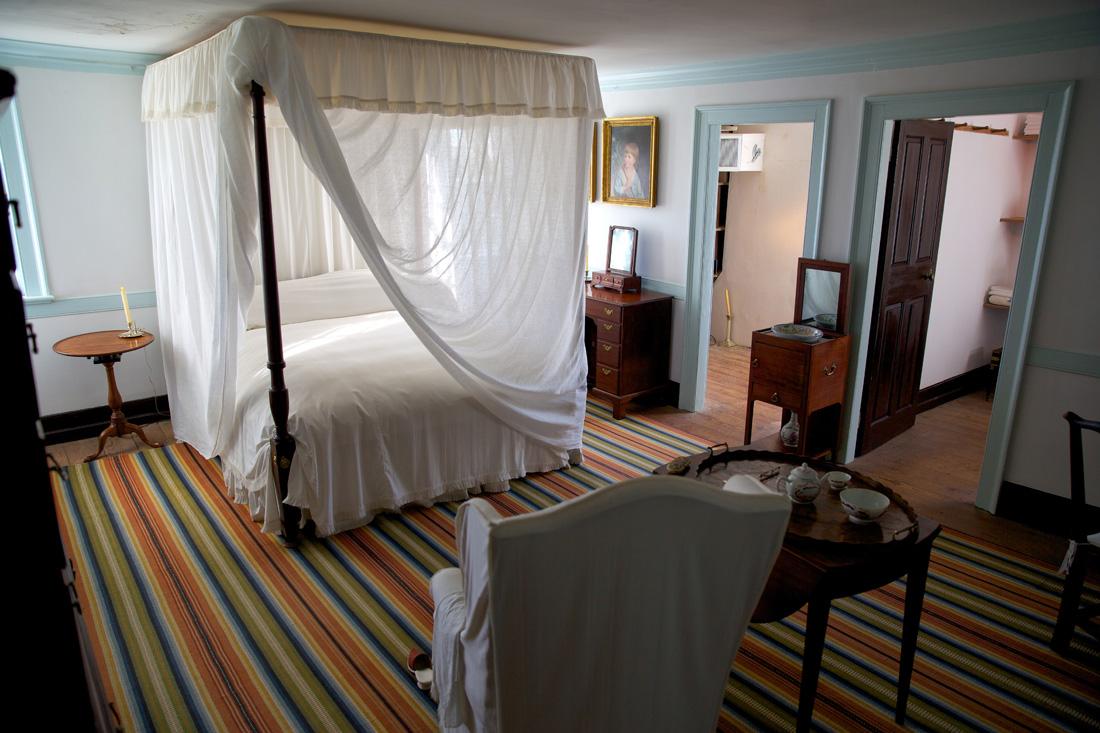 The second story consisted of a south-facing sunny bedchamber for the Washingtons, with the luxury of two large "walk-in" closets complete with built-in shelves. In addition to providing increased living and storage space, the bedchamber afforded the Washingtons a certain degree of separation from Mount Vernon's many overnight visitors and the hundreds of admirers and well-wishers who stopped to pay their respects to Washington following his service as both Continental Army General and President.

Although George Washington deserves credit for the interior design and furnishings of most of the rooms in the Mansion, the couple's bedchamber was the domain of Martha Washington who wished that "the Room intended for her Chamber" to be "done quite plain." The ceiling was therefore left unadorned, the plaster walls were whitewashed, and the simple woodwork painted a light Prussian blue. When the furnishings were recorded at the time of George Washington's death in 1799, the list included pieces acquired throughout the Washingtons' lifetimes. Pieces listed included: an English mahogany chest on chest purchased from the sale of Lord Fairfax's belongings in 1774, a dressing bureau made by Peter Scott of Williamsburg for Daniel Parke Custis, and the oversized mahogany bedstead Martha Washington "caused to be made in Philadelphia" for her husband.

Although the room's furnishings were used by both husband and wife, George Washington frequently referred to the space as "Mrs. Washington's Bed Chamber," and it was her most private space. The walls were lined with portraits of Mrs. Washington's four grandchildren painted by Robert Edge Pine, as well as favorite framed circular engravings of The Sorrows of Werther and Laurence Sterne's Sentimental Journey Through France and Italy.

The chamber also included the French writing desk purchased for her in 1790 by George Washington from the French minister, the Comte de Moustier. Martha Washington kept her most personal correspondence in this desk, including the letters from her husband that she burned after his death. Fortunately, two letters hidden in the desk escaped her notice and provide a few of the sentences George Washington penned to "My Dearest."

Fitzpatrick, John C. The Last Will and Testament of George Washington. Mount Vernon, Virginia: The Mount Vernon Ladies' Association of the Union, 1939.

Inventory of Articles at Mount Vernon with their Appraised Values Annexed, 1800; Inventory and Settlement of the Estate of Martha Washington, 1802, Photostats in the Mount Vernon Library.