The Mount Vernon Ladies' Association is an intrepid group of American patriots who have been preserving and promoting George Washington's Mount Vernon for more than 160 years.

George Washington once compared Mount Vernon to a well resorted tavern and indeed his home never ceased to be a mecca for visitors, drawn by curiosity or by reverence for its illustrious owner. Washington's nephew Bushrod Washington inherited the Mansion and four thousand acres after the death of Martha Washington. He was an Associate Justice of the Supreme Court and his duties often kept him away from Mount Vernon. He died in 1829, bequeathing the Mansion and twelve hundred acres to his nephew John Augustine Washington II who survived him by only three years. In 1840, his widow conveyed the estate to their son, John Augustine Washington III, the last Washington family member to own the estate. 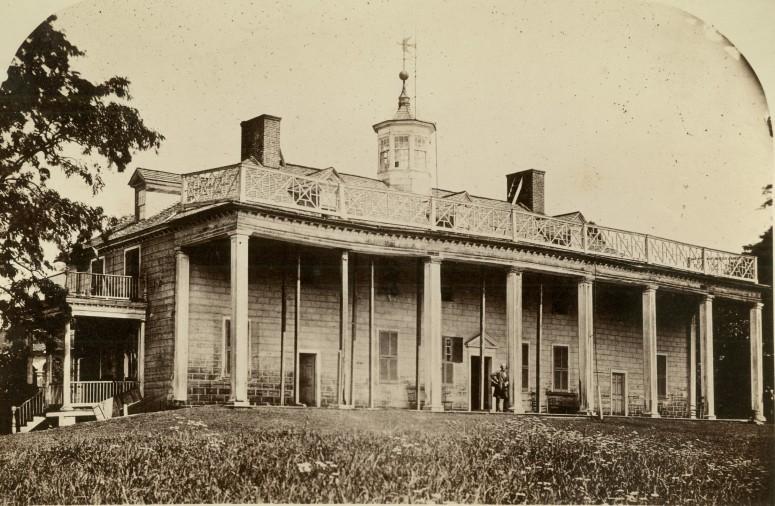 John Augustine III quickly realized that the deteriorating Mount Vernon estate was a far cry from the plantation his great-great uncle George Washington once presided over. His primary means of income came from wheat and potato production, woodcutting, selling enslaved people and outsourcing enslaved labor, collecting land rents, and his herring operation on the Potomac River. However, soil degradation, poor harvests, inclement weather, and the devastation of crops by insects and pests limited his agricultural returns.

While he managed to slow Mount Vernon’s financial decline, these endeavors were not enough to stop the downward spiral. In addition to facing these hardships, John Augustine III also experienced constant interruptions by sightseers, many of whom wanted to meet the living descendant of George Washington, see the mansion, and ask questions about Washington’s life. He attempted to sell the property to both the federal government and the state of Virginia, but both bodies were deeply mired in sectional and political partisanship.

In 1853, Louisa Bird Cunningham was traveling on the Potomac River and passed by Mount Vernon. Struck by its appearance, and fearing that it would soon be lost to the nation for lack of upkeep, Cunningham wrote a letter to her daughter Ann Pamela Cunningham. In the letter, she commented that if the men of the United States would not save the home of its greatest citizen, perhaps it should be the responsibility of the women.

These words galvanized her daughter into action. Initially writing under the nom de plume, "A Southern Matron," Ann Pamela Cunningham challenged first the women of the South, and later the women of the entire country, to save the home of George Washington. After convincing John Augustine Washington III to sell the property, Cunningham and the organization she founded, the Mount Vernon Ladies' Association of the Union, set out to raise $200,000, or $5.7 million today, to purchase the mansion and two hundred acres.

For more than 160 years the Mount Vernon Ladies' Association has worked to preserve George Washington's home.

Cunningham knew the Mount Vernon Ladies’ Association faced a huge challenge, so she structured the organization in a way she believed would save George Washington’s home. This structure has remained virtually unaltered since its founding. The Mount Vernon Ladies’ Association is comprised entirely of women, with the Regent, that is chairwoman of the board, selected from its membership. Vice Regents are elected as members, with never more than one Mount Vernon Lady representing a given state at the same time. Even today the organization thrives under this same women led structure.

When developing the organization’s fundraising strategy, Cunningham determined that the Vice Regent would organize a plan of action and appoint a board of “Lady Managers” for her state. Vice Regents and “Lady Managers” formed clubs in their states to help raise money. For each member’s one dollar donation, a gilt-framed copy of a Gilbert Stuart portrait of George Washington was sent to the club. Interested parties with greater wherewithal could receive an illuminated copy of the first president’s Farewell Address in return for a $10 donation. The Association also maintained subscription books of contributors, including ones who gave at least a dollar.

Fraternal organizations, including the Freemasons, the Independent Order of Odd Fellows, and the Knights Templar in New York, encouraged their members to give freely. Military groups, fire companies, and surveyors were challenged to subscribe to the Mount Vernon fund. The Ladies purposely targeted these organizations for their links with activities George Washington himself had pursued.

Several notable orators addressed the need for funds. One of the best known was Edward Everett, a former US Senator, governor of Massachusetts, president of Harvard University, and US ambassador to England. Through lectures, a newspaper column, and other activities, Everett amassed $69,551.06—more than one-third the Mount Vernon purchase price. Alabama journalist, politician, and diplomat William Lowndes Yancey, who was a first cousin of Miss Cunningham, lectured widely on behalf of the Association, ultimately raising thousands of dollars.

The Mount Vernon Ladies’ Association campaign was astonishingly successful. Just nine months after signing the purchase agreement, John Augustine Washington III had received a total of $85,000—almost half the purchase price. By February 1859, two additional payments brought the total to $100,000. Ten months later, the Association was within $6,666.66 of paying off the entire amount. The Washington family moved to their home in Fauquier County, Virginia, in June 1860 and the MVLA officially took possession of Mount Vernon.

Arrangements for early restoration efforts were halted by the nation’s political climate.