On April 6, 1917 the United States officially declared war on Germany and entered World War I, which had been raging across the Atlantic Ocean since the summer of 1914. The war was felt across the country, including at George Washington’s Mount Vernon.

Throughout the War, Mount Vernon saw an increase in crowds as more people moved to the Washington, DC area in support of the war effort. There was also a large number of military envoys which brought leaders from around the world to Mount Vernon.

Probably the most exciting event at Mount Vernon during the War, was when President Woodrow Wilson visited on the Fourth of July in 1918. A few months beforehand, organizations representing “24 different groups of foreign-born citizens” announced a plan to celebrate Independence Day as a “festival of loyalty to the United States.”1 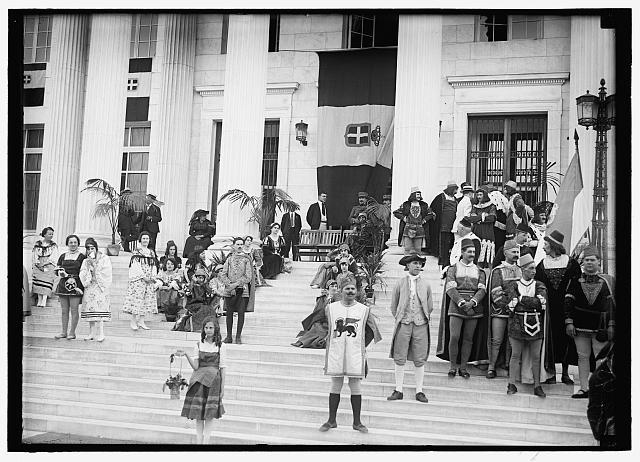 Wilson endorsed the idea and encouraged citizens across the United States to join in. Parades encapsulating this concept were planned across the country, including in Washington, DC. Not long before the celebrations began, one of the original organizers suggested Wilson should celebrate at Mount Vernon along with a delegation of United States’ citizens from around the world.2

Many of the Presidents of the United States have visited Mount Vernon before, during, and after their time in office. Explore their experiences at the home of the first president.

On July 4, 1918, about 50 individuals representing 33 nations joined Wilson on the U.S.S. Mayflower, the presidential yacht. They sailed down the Potomac River from Washington, DC to Mount Vernon. Upon arriving the delegation proceeded to the Tomb. First Wilson and then an individual from each nation placed a wreath at Washington’s tomb. After laying their wreaths the group moved to a clearing nearby and the representative from Belgium spoke briefly on behalf of the organizing committee. Then Wilson addressed the crowd.

Wilson’s speech was very fitting for a nation in the midst of a world war. He spoke about the country’s goal to make “men of every class should be free”.3 Wilson also related the current war to the founding of the country, stating “We intend what they intended. We here in America believe our participation in this present war to be only the fruitage of what they planted. Our case differs from theirs only in this, that it is our inestimable privilege to concert with men out of every nation what shall make not only the liberties of America secure but the liberties of every other people as well.”4 While he did not specifically discuss the progress of the war, his message was clear, the United States would not back down. The largest crowds ever to visit Mount Vernon listened to Wilson deliver his message. It is estimated that twenty thousand people attended the event.5 In fact, the crowds were so large, they were not topped until 2017.

Throughout World War I, a number of official military envoys came to Mount Vernon. The first after the US declared war arrived on April 29, 1917. Included in the group were members of the British and French War Commissions, US Cabinet members, the British and French Ambassadors, high officials of the Army and Navy, Congressmen, and the Governor of Virginia. A ceremony was held at the Tomb. The French Minister of Justice M. Viviani delivered an address and General Joffre placed a bronze wreath on the Tomb. Arthur Balfour, the British Foreign Secretary, also placed a wreath on Washington's sarcophagus saying, "There is no place in the world where a speech for the cause of Liberty would be better placed than here at the Tomb of Washington."6

Mount Vernon faced an extreme labor shortage during the war. There was so much government war work available in the Washington, DC area employees, especially day labors, left Mount Vernon to work at higher paying jobs. By early 1918 only two day laborers had not been lost to the draft or a government job. Harrison Dodge, the superintendent of Mount Vernon, tried to encourage his hourly laborers to stay. He first increased their pay from twenty cents an hour to twenty-five, then to thirty cents. It was not just hourly workers who saw an increase in pay, most salaried staff saw a ten percent increase as well.7

While there was a decrease in staff size, attendance swelled. The population in the Washington, DC area greatly increased due to all of the war work and many new to the area wanted to visit Mount Vernon. Between May and November of 1917, there were more than 120,000 visitors.8 This was more than the total number of visitors in 1915, which tallied 116,258 people.9 Since there was such a limited staff, routine maintenance became their priority.10

Later that month, the Mount Vernon Ladies’ Association voted on the issue. They decided that “the grounds of Mount Vernon be opened to soldiers and sailors under command of an officer for two hours on Sunday afternoon during the coming summer. This not to include the Mansion.”13 While this did not completely solve the problem, it did give military members the opportunity to visit.

Throughout the war current and future members of the Mount Vernon Ladies’ Association found ways to support the war effort in their communities. Mrs. Frances C. Maxey Vice Regent for Texas organized the Red Cross in Austin.14

At one point during the war, army officials asked if they could put a searchlight on the hilltop immediately north of the Mansion.