Due to preservation work at the Tomb, the sarcophagi of George and Martha Washington are not currently on view.

George Washington died in his bedchamber at Mount Vernon on December 14, 1799.

His last will outlined his desire to be buried at home at Mount Vernon. Washington additionally made provisions for a new brick tomb to be constructed after his death, which would replace the original yet quickly deteriorating family burial vault.

In 1831, Washington’s body was transferred to the new tomb, along with the remains of Martha Washington and other family members.

Today, the gently wooded enclosure that surrounds the Washingtons' final resting place is a lovely, fitting space to pay homage to the Father of Our Country and the first First Lady. 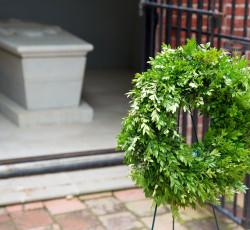 Tribute at the Tomb

Mount Vernon welcomes those who wish to pay their respect to the Father of our Country to honor George Washington by participating in a daily brief wreath-laying ceremony at the Washingtons' Tomb. 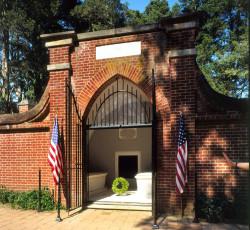 George Washington's will directed the building of a new tomb at Mount Vernon. This is the final resting place for George and Martha Washington and a number of family members. 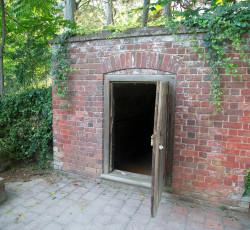 On December 18, 1799, four days after his death, George Washington’s body was placed in the Old Tomb where other family members were entombed. They remained here until 1831 when they were moved to the New Tomb. 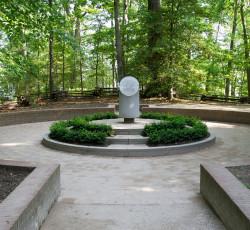 Tribute at the Slave Memorial

Commemorate the community of the enslaved people who lived and worked at Mount Vernon during a special wreath-laying presentation each day.

Mount Vernon welcomes those who wish to arrange for a wreath-laying ceremony to pay their respect to the Father of our Country. Reservations must be made in advance.

Tributes at the Tomb

A special ceremony and wreath laying occur at Washington's Tomb daily at 10 a.m. and 3 p.m., April- October, and 12 p.m., November-March. 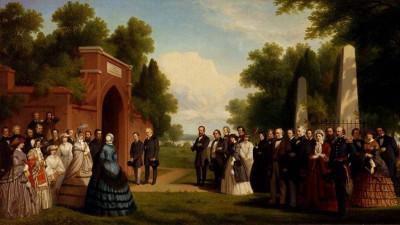 Throughout its history as a cultural shrine, Mount Vernon has been the site of numerous visits from politicians to world leaders. 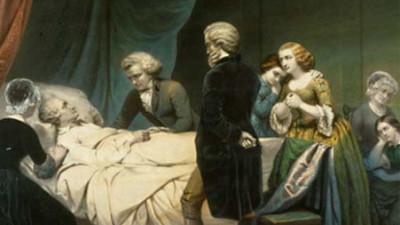 On the evening of December 14, 1799, at Mount Vernon, George Washington passed away of a throat infection. He was buried four days later in the family vault at Mount Vernon.

First in War, First in Peace

...and first in the hearts of his countrymen. Maj. Gen. Henry Lee's gave the famous eulogy about George Washington.

Learn more about the Old and New Tombs upon the grounds of the Mount Vernon estate. Washington, after…

On the eve of his death on December 14, 1799, the gravely ill George Washington asked his wife Martha to bring him the two versions of his will. After reviewing them, Washington had one thrown in the fire and asked Martha to safeguard the other.

At Mount Vernon, when a member of the enslaved community died, the estate’s carpenters crafted a coffin. Funerals probably occurred at night, when more people could attend, however, details of these celebrations were not recorded.

Rather than let George Washington's body be submitted permanently to the grave, William Thornton, a friend and prominent physician, proposed a plan to "resuscitate" the recently deceased body of George Washington.

On December 18, 1999, Mount Vernon reenacted George Washington's funeral - on the 200th anniversary of that doleful event.

George Washington's Prayer for His Country

Washington's prayer adapted from his Circular Letter to the States, which he wrote on June 8, 1783, as the commander in chief.