In the 1850s a group of women banded together to save Mount Vernon. Founded by Ann Pamela Cunningham, the Mount Vernon Ladies’ Association (MVLA) purchased George Washington’s home from its last private owner. The MVLA took ownership of the property in 1860 and opened to the public as a museum.

The MVLA was at the forefront of an explosion of all-female organizations in the 19th century. Women’s groups promoting issues such as abolition, temperance, child welfare, and historic preservation gave members an intellectual outlet, leadership experience, and increasingly public roles in society. Yet these women lacked one powerful tool—the right to vote.

Gaining access to the ballot box presented new obstacles, as women aimed to enter a sphere dominated entirely by men. It would take decades for suffrage activists to achieve their goal.

-19TH AMENDMENT TO THE U.S. CONSTITUTION

The fight for women’s suffrage began quietly in the 1840s and expanded after the Civil War, with the formation of several national organizations.

In the early 20th century, a new generation of activists focused on lobbying Congress and President Woodrow Wilson for a national suffrage amendment. Attention-grabbing protests, parades, and civil disobedience thrust the suffrage debate into the mainstream.

In 1919, the U.S. Senate and House of Representatives passed a suffrage amendment. After ratification by 36 of the nation’s 48 states, the 19th Amendment became law on August 26, 1920, when the Tennessee legislature ratified the measure by just one vote.

Why did some women oppose suffrage?

Not all women supported women's suffrage. According to the ca. 1910 pamphlet below from the National Association Opposed to Woman Suffrage there were a number of anti-suffrage arguments. Their reasons included: women did not want to vote,  women would vote the same as their husbands, and in some states where women outnumbered men the government would be under "petticoat rule".

Nellie M. Quander (1880–1961) was the great-great-granddaughter of Nancy Quander, an enslaved woman freed by George Washington’s will. Shortly after graduating from Howard University in 1912, Quander spearheaded the incorporation of Alpha Kappa Alpha (AKA), the oldest black sorority in the country.

In February 1913, Quander wrote to suffrage organizer Alice Paul expressing interest in participating in the first suffrage march on Washington, D.C., but only if she and her sorority sisters did not “meet with discrimination on account of race.” At the parade, Paul insisted that African American women walk at the back. It is unclear how many AKA members chose to march under those circumstances.

Woman, in her appropriate sphere, on her heavenly appointed mission, has dared to undertake that from which Man shrank appalled, and has triumphed where he failed!

How did female activists advance their causes without political power?

The Power of Femininity

Nineteenth-century norms categorized women as more pious, pure, and moral than men. Channeling this rhetoric, the MVLA argued that women were uniquely suited to preserve the domestic space of Washington’s home as a sanctuary from politics and corruption.

Many suffragists maintained that female voters would improve society, especially in areas such as corruption, alcoholism, gambling, and child labor.

The MVLA raised $200,000 to purchase Mount Vernon through a nationwide fundraising campaign. Each Vice Regent (board member) raised funds in her state, assisted by “Lady Managers” who collected donations at the local level.

In the 19th century, many considered it scandalous for women to speak publicly to mixed-gender audiences. The MVLA partnered with prominent male orators to give speeches on their behalf. Former U.S. Senator Edward Everett delivered more than 100 ticketed lectures on George Washington, raising nearly $70,000 for the purchase of Mount Vernon.

Suffrage leaders such as Lucy Stone and Susan B. Anthony dared to deliver lectures themselves. Men provided political and financial support. Henry Browne Blackwell, husband of Lucy Stone, campaigned widely for suffrage alongside his wife and helped finance a pro-suffrage newspaper. Abolitionist Frederick Douglass was an outspoken suffrage advocate who attended the 1848 Seneca Falls Convention. 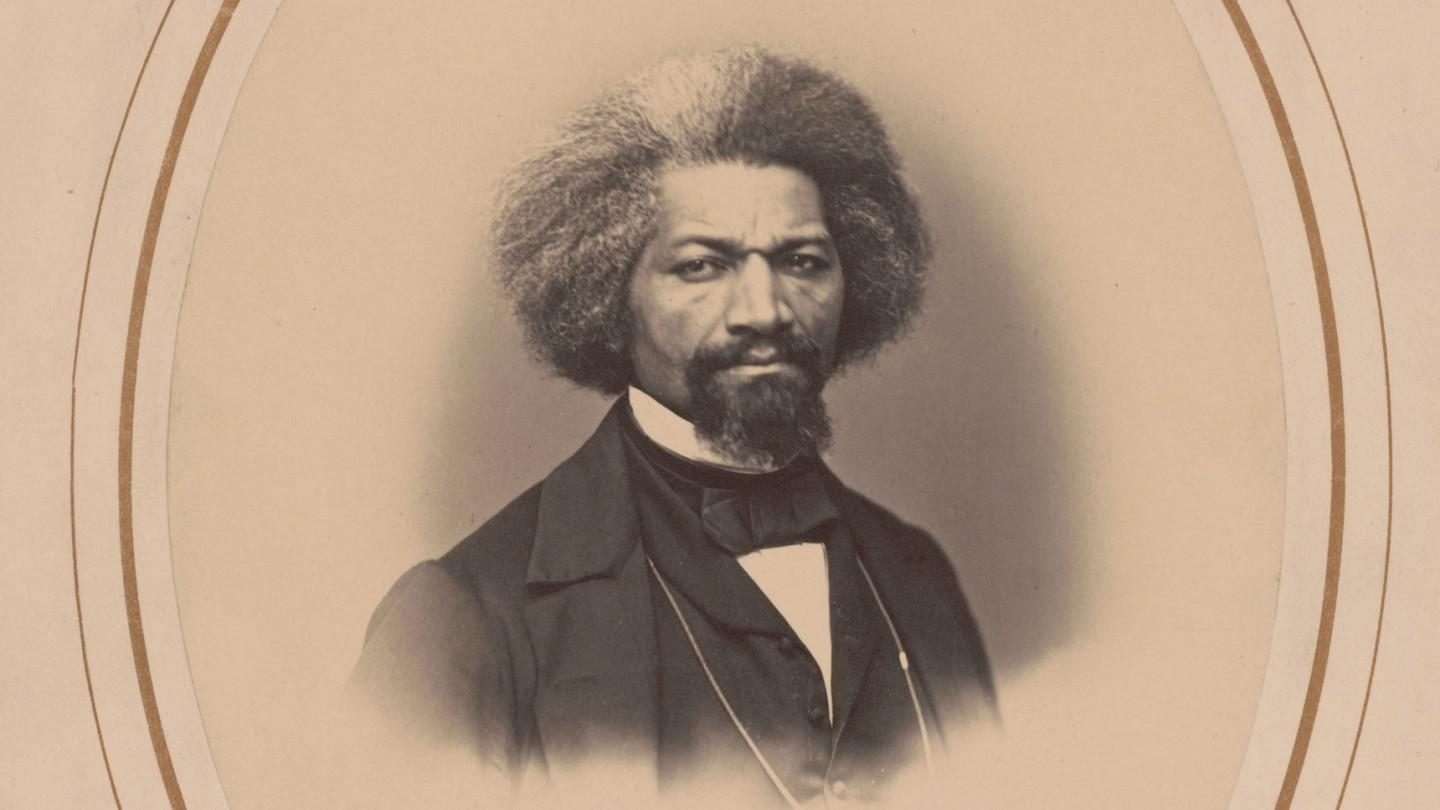 From 1858 to 1860, the MVLA’s monthly newsletter updated supporters on fundraising efforts. Subscriptions helped fund the purchase of Mount Vernon.

The Suffrage Movement’s longest-running suffrage periodical was published weekly from 1870 to 1931 under several titles. This newspaper featured speeches, debates, notes from conventions, poetry, and short stories. 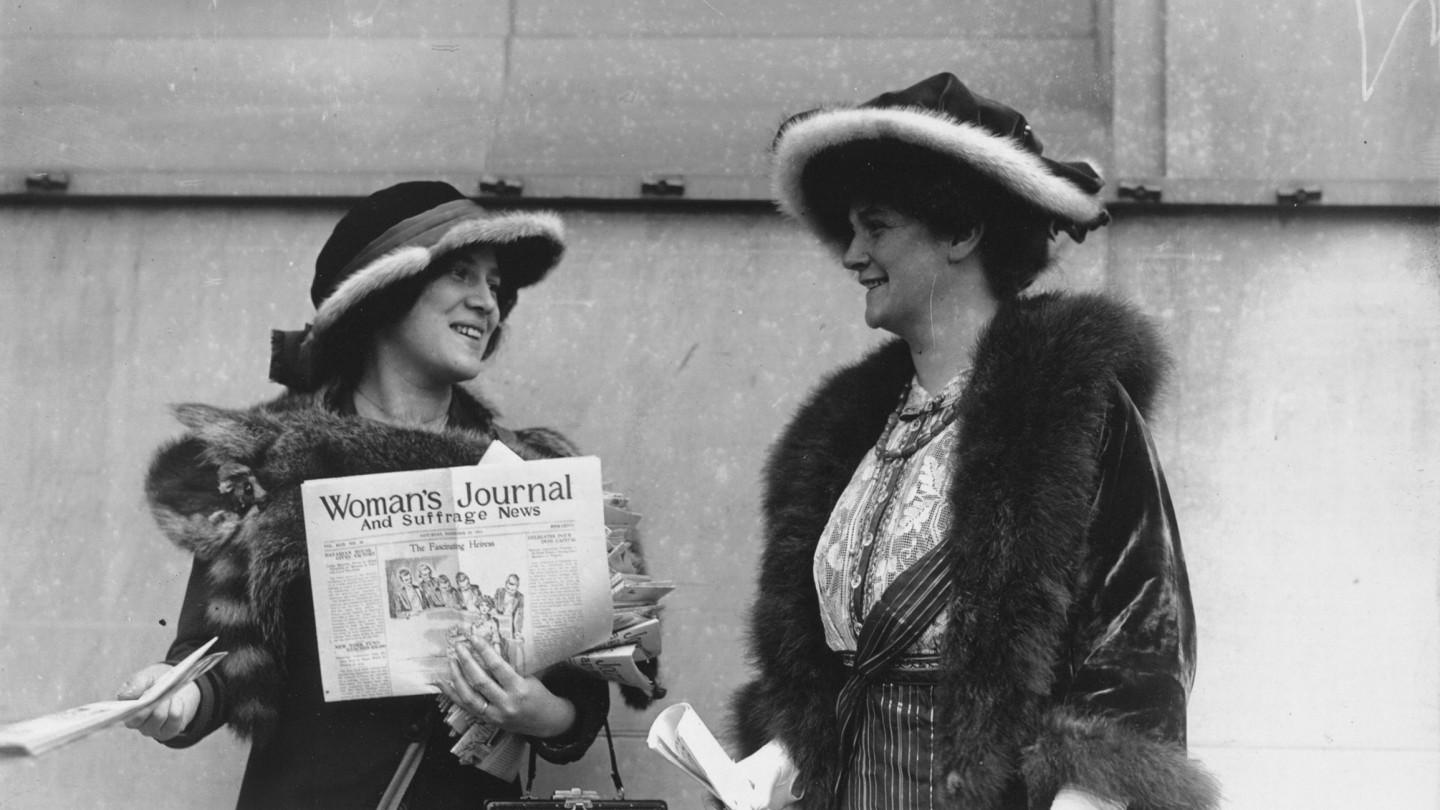 Suffragists distribute the Woman’s Journal in 1913. Library of Congress

As a non-partisan organization, the Mount Vernon Ladies’ Association never took an official stance on women’s suffrage. Outside their roles in the MVLA, some Vice Regents expressed strong opinions.

MVLA founder Ann Pamela Cunningham believed in women’s intellectual equality with men. Educated at an elite girls’ boarding school in South Carolina, Cunningham chafed at the expectation that she simply marry and bear children. She devoted her energy to saving Mount Vernon. 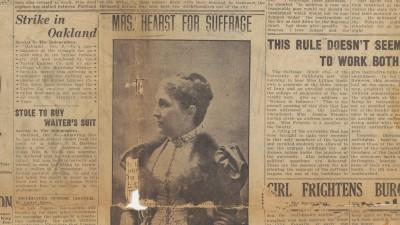 A prominent philanthropist and reformer, Phoebe Apperson Hearst made headlines in 1911 when she declared her support for a women’s suffrage amendment in California. Hearst later served as vice-chairwoman of the National Woman’s Party and encouraged her son, newspaper mogul William Randolph Hearst, to use his publications to promote suffrage.

Described in her obituary as an “ardent anti-suffragist,” Annie Burr Jennings chaired the Fairfield chapter of the Connecticut Association Opposed to Woman Suffrage, hosting meetings and debates over suffrage at her 30-room estate, “Sunnieholme.” 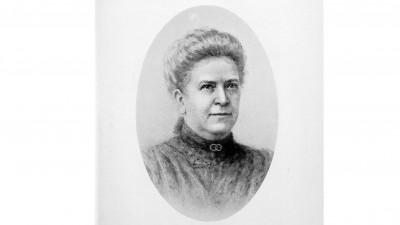 A statewide referendum in 1893 secured voting rights for women in Colorado. Five years later, Alice Hale Hill joined the state’s governor, senators, and congressmen in signing a public letter aimed at eastern states proclaiming “the value of equal suffrage.” The letter noted that women’s votes were more “conscientious” than men’s and would help establish a “better order.”

Representative Women of Colorado: A pictorial collection of the women of Colorado who have attained prominence in the social, political, professional, pioneer and club life of the state by James Alexander Semple, (Denver: Alexander Art Pub. Co., 1911). Digitized by Harold B. Lee Library, Brigham Young University 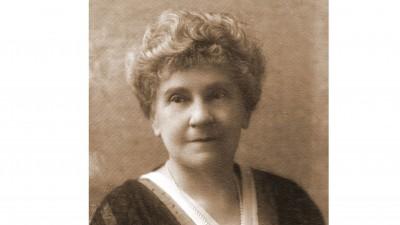 Many MVLA board members supported suffrage despite conservative backgrounds. Following Mrs. Maxey’s death, a fellow Vice Regent remarked, “Schooled in the traditions of the South, she was also a forceful part of a modern world, believing in Women’s Suffrage, and later working ardently in that cause.” 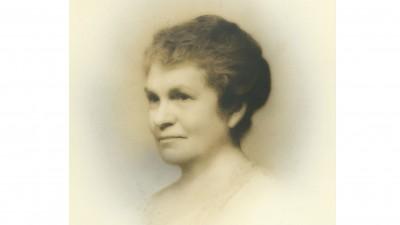 Charlotte Woodbury’s fellow MVLA board members recalled that she was “an early advocate of women’s suffrage” who “helped to organize the League of Women Voters in New Hampshire.” Woodbury was also deeply involved in public kindergarten, the Y.W.C.A., Red Cross, and Children’s Aid Society.

George Washington and the Founders in Suffrage-Era Imagery

George Washington and the Founders in

The strong and independent members of the MVLA were divided on the issue of women's suffrage.

The content on this page was adapted from Fighting For Their Cause: Women’s Activism, from Mount Vernon to Suffrage, a temporary exhibition in 2020 by George Washington's Mount Vernon.