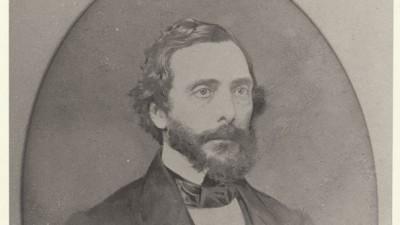 John Augustine Washington III was the great-grand nephew of George Washington and the last private owner of Mount Vernon.

The story of the Washington family in America began in the mid-1650s when two young men, John Washington?

"This is a subject to which I confess I have paid very little attention," George Washington wrote to?

Betty Washington Lewis was the only sister of George Washington to survive to adulthood. Her family'ss devotion and loyalty to the Patriot's wartime effort led them to financial hardship.

The early lineage of the Washington family line can be traced back to Sir William de Hertburn. Upon being?

The Custis family in America can trace its roots to the late seventeenth century, when the family split?

The Fairfax family of Fairfax County, Virginia, lived in a splendid brick mansion called Belvoir on the?

Frances "Fanny" Bassett was Martha Washington's niece, the daughter of Anna Maria Dandridge and her husband?

Fielding Lewis, born on July 7, 1725, was a colonel in the American Revolution and the brother-in-law and second cousin of George Washington through their common great-grandfather, Augustine Warner II. The Lewis family was well known and respected as merchants in Virginia society, owning extensive tracts of land in and around Fredericksburg. Lewis built the mansion on his property that is known today as Kenmore. He is remembered for his dedication to the patriotic cause as well as his close personal ties to George Washington.

George Washington was born on February 22, 1732 on his father's plantation on Pope's Creek in Virginia's Westmoreland County...

Howell Lewis was George Washington’s nephew and second cousin to Meriwether Lewis of the famed Lewis and Clark expedition. In the early 1790s, Lewis briefly served as President Washington’s personal secretary and manager of Mount Vernon. After resigning from his post at Mount Vernon for monetary reasons, Lewis managed his own land holdings in Virginia until he passed away in 1822.

John Augustine Washington III was the great-grand nephew of George Washington and the last private owner of Mount Vernon.

John Parke Custis (known as Jacky when younger, and Jack as he got older) was around four years old when?

Lawrence Washington was the elder half-brother of George Washington, being the oldest living child of Augustine Washington and his first wife Jane Butler.

Martha "Patty" Parke Custis was born on December 31, 1777, in one of the second-floor bedchambers at Mount Vernon.

Martha Washington was the first first lady of the United States and spent about half of the Revolutionary War at the front with General Washington. She helped manage and run her husbands' plantations and raised her children, grandchildren, nieces, and nephews.

Mary Ball Washington (b. approximately 1707 – d. 1789) is primarily known as the mother of George Washington.

George Washington had no biological children of his own, and it took many years for Washington to come to grips with the fact that he was not going to father his own children. Despite this difficulty, the Washingtons' home at Mount Vernon was filled with children for nearly all forty years of their marriage. For most of these children, George Washington stood in the role of father or grandfather.

George Washington was born in February 1732 at Popes Creek.