Howell Lewis was George Washington’s nephew and second cousin to Meriwether Lewis of the famed Lewis and Clark expedition. In the early 1790s, Lewis briefly served as President Washington’s personal secretary and manager of Mount Vernon. After resigning from his post at Mount Vernon for financial reasons, Lewis managed his own land holdings in Virginia until he passed away in 1822.

Lewis was born on December 12, 1771, in Culpepper County, Virginia, the youngest in a family of fourteen children. His mother, Betty Washington Lewis, was the younger sister of George Washington. His father, Fielding Lewis, Sr., was a prominent merchant and planter in Fredericksburg, Virginia. In 1775, the family moved into their newly constructed Georgian mansion in Fredericksburg, known today as Kenmore Plantation. When Lewis was still a small child, his father became dedicated to the emerging cause of the American Revolution and used his considerable fortune to support the war effort, including funding an armory for the Continental Army. Fielding Lewis’s support for the Patriot cause damaged the family’s finances, and his wife and children, including Howell, would struggle with money throughout their lives. Despite the family’s debts, when Fielding died in 1781, ten-year-old Howell inherited seventeen slaves and 15,000 acres of land in Kentucky.1

As a child, Howell Lewis received an education with his siblings at the Fredericksburg Academy. After graduating in 1789, Lewis seems to have struggled to find steady financial footing. His mother blamed his struggle for solvency on his father’s early death. “To examine his improvement,” wrote his mother in a letter to George Washington, “he has been left entirely to himself- and of course not very well informed.”2 In late 1791 or early 1792, Lewis rented land in Virginia, which his mother thought was a poor idea, for “he is not acquainted with the Experiences of a Plantation,” as she explained in a letter to Howell’s older brother, Robert.3

In April 1792, Howell Lewis’s uncle, President Washington, offered him a job as his personal secretary in Philadelphia, a job previously filled by his brother Robert. Washington confided in a letter to his friend Charles Carter:

I was in no real want even of Howell Lewis, but understanding that he was spending his time rather idly, and at the same time very slenderly provided for by his father, I thought . . . by taking him under my care, I might impress him with ideas, and give him a turn to some pursuit or other that might be serviceable to him hereafter.4

Howell immediately accepted the offer, and responded to Washington: “I consider myself extremely favored by your proposal,” although he admitted that “I lament I have not been more attentive to the improvement of my writing tho hope that I shall soon be qualified to do the blessings for which you mean to employ me.”5 Lewis worked as Washington’s scribe from late April 1792 until July 1793, during which time he lived with Washington in the executive mansion in Philadelphia, earning a salary of $300 a year. In July 1793, he accepted Washington’s offer of the position of manager at Mount Vernon for the same yearly salary, after the former manager, Anthony Whiting, passed away. 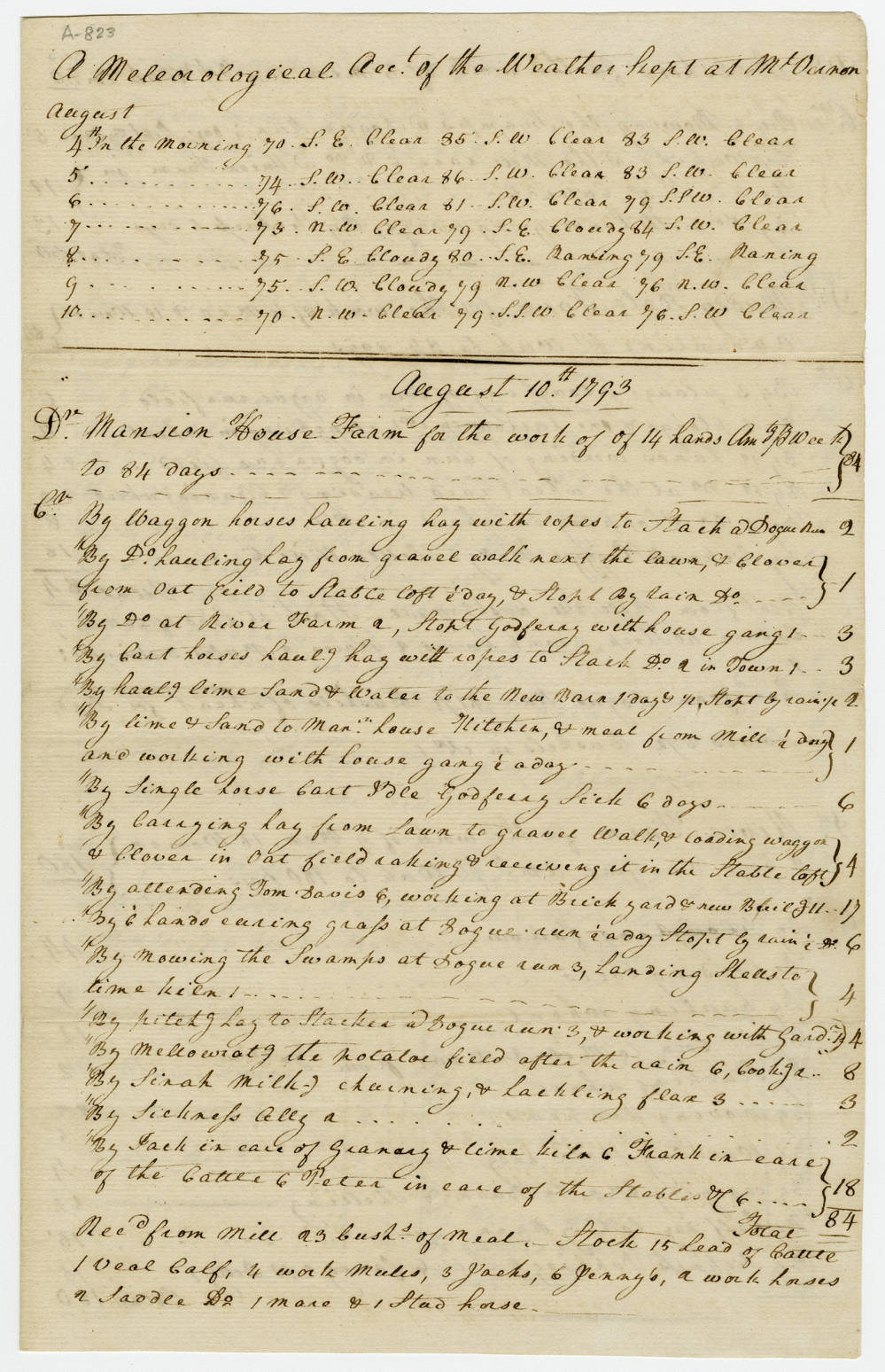 As manager, Lewis’s responsibilities included supervising the management of each of the five separate farms on the Mount Vernon Estate, as well as supervising the five overseers in charge of their separate farms. Washington expected Lewis to act as his personal liaison while the president was in Philadelphia, and to keep Washington updated on the events and conditions at the plantation. While manager, Lewis maintained a weekly correspondence with Washington on the affairs at Mount Vernon. The correspondence reveals Washington’s high standards and expectations for his subordinates, as well as Lewis’s struggle to live up to those standards. In his letters, Washington routinely chided Lewis for failing to adequately answer all of his inquiries concerning his estate, but usually tempered his criticisms with kindness. For example, after rebuking him in a letter for being unclear in his response to Washington’s questions, the president softened his criticism by stating:

I mention these matters not with a view to find fault, but to shew you the advantages of correctness; and, as you are a young man just advancing into life & business, to impress you with the propriety & importance of giving attention, and doing whatever you undertake well.6

On April 19, 1794, Lewis offered his resignation from his position as manager due to monetary reasons. He explained in a letter to Washington that “bad management” of his rented Virginia lands had plunged him into debt, and his salary at Mount Vernon was insufficient to cover his debts. Lewis informed Washington that he planned to sell some of his inherited slaves and “move with the small remains of my fortune which are but a few negroes, the next spring with my Brother George to Kentuckey, & there try if I can make something, or at least have it in my power to look after my lands which I have in That Country.” Lewis thanked his uncle for his employment, and closed his letter with the statement that his time working for Washington “made an impression on my mind which, I trust time itself cannot obliterate.”7

For unknown reasons, Lewis abandoned his plan to move to Kentucky, and instead, returned to his lands in Fredericksburg. One source names him as a volunteer in the army sent to western Pennsylvania in October of 1794 to suppress the Whiskey Rebellion.8 On September 26, 1795, Lewis married Ellen Hackley Pollard in Richmond, Virginia. The couple had eleven children together. Howell and Ellen Lewis spent several days with George and Martha Washington at Mount Vernon in early December 1799. The Lewises left Mount Vernon on December 8, six days before Washington passed away, making Howell one of the last of Washington’s family to see him before his death. Washington’s will left Lewis 1/23 of his residual estate, including 1,531 acres on the Kanawha River in what is now Kanawha County, West Virginia. He moved himself and his family to these western lands in 1812, and remained there until his death in 1822.

8. Robert, Wellford, “A Diary Kept by Dr. Robert Wellford, of Fredericksburg, Virginia, during the March of the Virginia Troops to Fort Pitt (Pittsburg) to Suppress the Whiskey Insurrection in 1794,” William and Mary Quarterly, Vol. 11, No. 1 (July 1902): 9.

Sorley, Merrow Egerton. Lewis of Warner Hall: The History of a Family Including the Genealogy of Descendants in Both the Male and Female Lines, Biographical Sketches of its Members, and their Descent from other Early Virginia Families. Baltimore: Genealogical Publishing Co., Inc., 1935.