The Custis family was a powerful and accomplished family within colonial Virginia society. 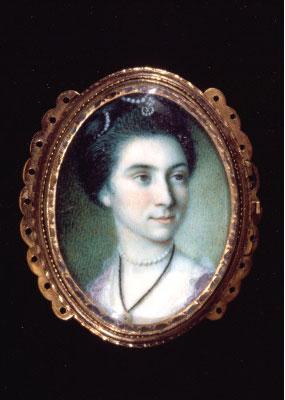 Martha Parke Custis was Martha Washington and Daniel Parke Custis's youngest child. Known to the family as Patsy, Custis had a particularly difficult life. Patsy was only a toddler when her mother married George Washington. By the time Patsy was eleven or twelve, she was plagued with seizures.

The Washingtons tried everything that medical science and home remedies could recommend at the time. Potential cures ranged from medicines such as "a vial of Nervous Drops" (valerian, a plant), "Nervous Powders," "a large Julep," musk capsules, mercury, Peruvian bark, and ether. Other attempted cures including bleeding, purges, the purchase of an iron ring for the girl to wear, and the mineral waters at Warm Springs, Virginia.1

One doctor even recommended special diets and lifestyle modifications, writing to Martha Washington that: "I imagine it will be unnecessary to assure Miss Custis that I have the greatest Hopes her Happiness will be much promoted by regular moderate Exercise [sic], temperate living . . .and her being attentive to keep her Body cool and open …by the use of Barley Water and light cooling Food."2

The Washingtons consulted with numerous doctors in Alexandria, Fredericksburg, and Williamsburg, Virginia to no avail.3 Patsy's seizures increased in both frequency and severity over the years. In the summer of 1770, George Washington kept a log of these episodes in the margins of a printed calendar in his almanac. Of the eighty-six days in this period, Patsy had seizures on twenty-six days, often as many as two per day.4

Patsy's suffering came to an end in the summer of 1773, when she was only 17 years old. In his diary, George Washington wrote simply on June 19th, 1773: "At home all day. About five oclock poor Patcy Custis Died Suddenly."5

The details of this tragic event, however, can be pieced together from family letters and the recollections of those who were present. A number of family members were visiting Mount Vernon. Around four in the afternoon after everyone had finished dinner, Patsy and Eleanor Calvert (then the fiancee of Patsy's brother, John Parke Custis) were talking quietly. Patsy went to her room to retrieve a recent letter from her brother who was away at college in New York. Hearing a strange noise coming from Patsy's room, Calvert found the young woman on the floor in the throes of a life-threatening seizure. Patsy was moved onto the bed.

Family members who were present later recalled the scene as the girl's mother frantically sought help, while George Washington knelt beside the stepdaughter he had raised since she was a toddler with tears streaming down his face, praying for her recovery. Less than two minutes later she was dead, "without uttering a Word, a groan, or scarce a Sigh."6 In a letter to his brother-in-law written the following day, George Washington relayed the news that Patsy, described as his "Sweet Innocent Girl," had been buried earlier in the day and that the situation had "almost reduced my poor Wife to the lowest ebb of Misery."7