The early lineage of the Washington family line can be traced back to Sir William de Hertburn. Upon being granted the lordship of Wessyngton, a small rural estate located in northeast England, Hertburn adopted the name of his new estate. The historic records show that Sir William de Wessyngton’s son, Walter, employed a seal that showed arms with a lion rampant as early as 1203.1 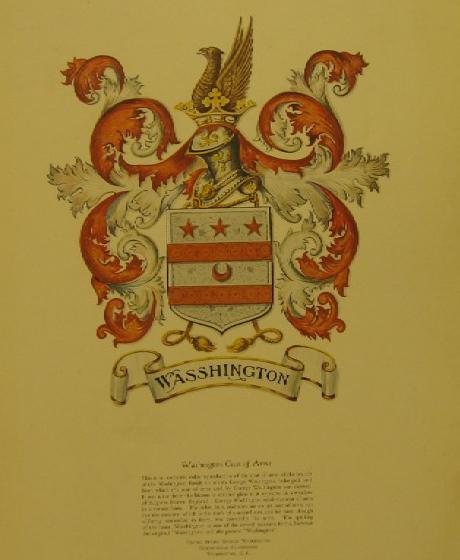 Over the next 150 years the seal was modified slightly, probably to reflect alliances made by the Wessyngton family during civil and dynastic conflicts or as a result of the acquisition of additional lands and manors. In 1346, Sir William de Wessyngton’s great grandson was recorded as having displayed a version of the now more familiar heraldic coat of arms that would eventually become associated with the Washingtons of Virginia – two horizontal bars below three mullets, or five-pointed stars.

However, even this design went through modifications. Originally, the colors were silver on a red background. Towards the end of the fourteenth century the more familiar red on silver background associated with the Washington family is recorded.

Over the next two centuries the Washington lineage passed through many upheavals, and various branches of the family moved to other parts of England. The more recent ancestors of Washington settled in Northamptonshire in central England. It was here in 1592, that Lawrence Washington of Sulgrave Manor had confirmed upon him by Robert Cook, Clarenceux King of Arms, the coat of arms that consisted of a silver background with two red bars and three red mullets.

These details were confirmed to George Washington in a letter dated December 7, 1791 from Sir Isaac Heard, Garter Principal King of Arms of the College of Arms in London in which he also enclosed a copy of the heraldic coat of arms design.2 In his reply to Heard, Washington noted that "the arms are the same that are held here by the family."3 The coat of arms probably accompanied one of the two grandsons of Lawrence Washington to Virginia in the 1660s. One of the grandsons was Colonel John Washington, who was George Washington’s great-grandfather. 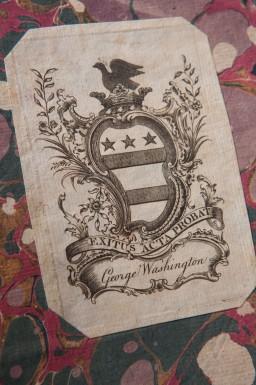 George Washington had undoubtedly seen earlier evidence of the use of the family coat of arms with its crest on objects such as tombstones of the Washington family. Throughout his life Washington also had the family’s heraldic crest applied to such diverse personal belongings as silverware, wax seals, horse-drawn carriages, walking sticks, and interiors of buildings including Mount Vernon, where the coat of arms was featured in the middle of the wooden fireplace mantel in the front parlor. The coat of arms was even featured on the livery uniforms of Washington’s servants, a common practice amongst wealthy planters prior to the Revolution.

George Washington's interest in both the application of heraldic arms and crests survived the Revolutionary War. So did Washington’s interest in his own family’s heraldic history. Following the war, Washington commenced correspondence with both Sir Isaac Heard of the London College of Arms and with David and Francis Clark of Philadelphia, well-known manufacturers of horse-drawn carriages. In September 1790, correspondence between the Clarks and George Washington on repairs to a carriage owned by Washington included an estimate of four pounds ten shillings for adding "Ornaments and Coats of Arms."4 The correspondence also included a sketch of the crest located above the initials GW that was to be applied.

An enduring myth surrounding George Washington’s coat of arms is that it provided the basis for the 'Stars and Stripes,' and the Great Seal of the United States. There is, however, no discernible evidence to date that documents any connection between the two, and there are very few similarities.

2. "Isaac Heard to George Washington, 7 December 1791, with Genealogical Information on, and Trees of Washington's Family," George Washington Papers at the Library of Congress, 1741-1799: Series 4. General Correspondence. 1697-1799.