The Fairfax family of Fairfax County, Virginia, lived in a splendid brick mansion called Belvoir on the Potomac River four miles downstream from Mount Vernon. In his youth, George Washington developed lifelong friendships with several members of the Fairfax family and established social connections that would propel him to prominence as a young surveyor, soldier, and politician. George Washington fondly remembered his time with the Fairfaxes as "the happiest moments of my life."1

The Fairfaxes were descended from a prominent family based in Yorkshire, England, that had obtained a Scottish peerage from King Charles I in 1627. By 1719, Thomas Fairfax the sixth Baron of Cameron, inherited control of the vast Northern Neck Proprietary, a five million acre land grant between Virginia's Rappahannock and Potomac rivers. In 1734 he asked his cousin William Fairfax to act as his land agent in Virginia. By 1743, William and his family were comfortably settled into their new home on the Potomac. That same year Lawrence Washington married Colonel William Fairfax's eldest daughter Ann and the couple settled down at the newly re-named Mount Vernon, just across Dogue Creek from Belvoir.

Lawrence's younger brother George Washington became a part of the extended Fairfax family. He became a frequent foxhunting companion of Colonel Fairfax, who took an active interest in Washington's career. In 1748, Washington accompanied the Colonel's eldest son George William Fairfax on a surveying expedition across the Blue Ridge Mountains to Lord Fairfax's lands in the Shenandoah Valley. 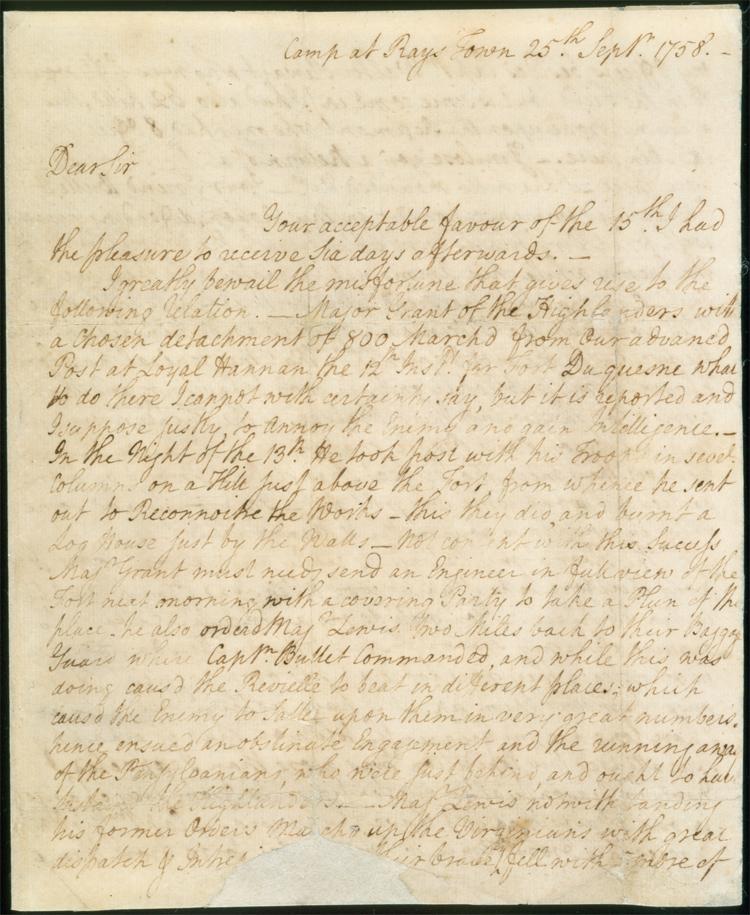 Washington's connections to the Fairfaxes and this early experience in western lands qualified Washington for his early military assignments. George Washington acknowledged the importance of having such prominent patrons when he told his younger brother Jack in 1755, "I shou'd be glad to hear you live in Harmony and good fellowship with the family at Belvoir, as it is in their power to be very serviceable upon many occasions to us, as young beginners," further admitting that "to that Family I am under many obligations."2

George William Fairfax inherited the Belvoir estate after his father's death in 1757. He and his wife Sally frequently hosted George and Martha Washington after the couple settled next door at Mount Vernon in the spring of 1759. In 1773, George William and his wife left for England to pursue a complex inheritance suit. The pair left Washington with power of attorney to oversee their interests in Virginia, which he did until his appointment to command the Continental Army two years later. The couple never returned to America. George William died at his home near Bath, England, on April 3, 1787. Sally lived alone until her death in 1811.

George William's younger brother Bryan Fairfax remained a lifelong friend of George Washington. More than 200 letters survive from a correspondence that lasted forty one years. The letters exchanged between them during the summer of 1774 reveal some of Washington's most expressive opinions on the crisis between Britain and the Colonies. In 1777, Bryan Fairfax traveled to New York to use his influential connections on both sides to act as a mediator. However, he was detained by both British and American forces for refusing to swear an oath of loyalty to either cause. Fairfax abandoned his plan and headed for home, stopping at Valley Forge to visit General Washington.

On December 11, 1799, Fairfax dined with the Washingtons at Mount Vernon. Three days later George Washington died, leaving Bryan a special bible in his will. Fairfax and his son Ferdinando were noted among the principal mourners at Washington’s funeral.3 Bryan Fairfax died at his home near Alexandria on August 10, 1802.

3. Edward D. Neill, The Fairfaxes of England and America in the Seventeenth and Eighteenth Centuries (New York: Joel Munsell, 1868), 182.

Neill, Edward D. The Fairfaxes of England and America in the Seventeenth and Eighteenth Centuries. Albany, New York: Joel Munsell, 1868.