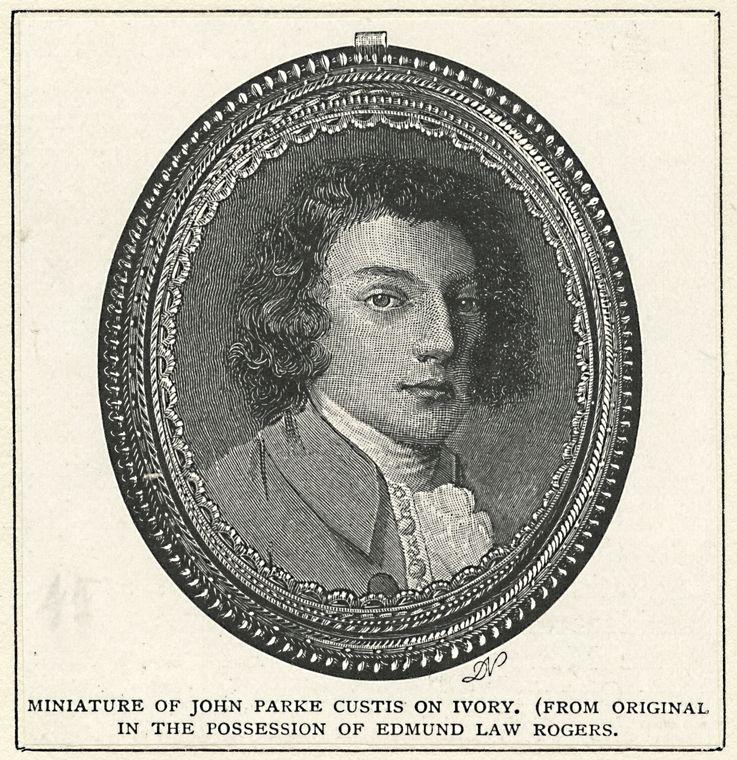 John Parke Custis (known as Jacky when younger, and Jack as he got older) was around four years old when his mother Martha married George Washington. Custis was one of the two surviving children of Martha Washington's first marriage to Daniel Parke Custis. As a result, George Washington became Jacky's legal guardian. Following the death of his sister Martha Parke Custis in 1773, Custis became the sole heir of the Custis estate.

Jacky's education began at Mount Vernon under the eye of his mother, but became more serious in the fall of 1761 with the arrival of a Scottish tutor named Walter Magowan. After Magowan left for England in the fall of 1767, George Washington wrote to the Reverend Jonathan Boucher, an Anglican minister who ran a school for boys in Caroline County, Virginia, to see if he would be willing to "add" Custis "to the number of your Pupils."1

Washington noted that Jacky had been introduced to both Greek and Latin by his tutor and described his stepson as "a boy of good genius, about 14 yrs. of age, untainted in his morals, and of innocent manners." He considered him "a promising boy" and expressed "anxiety" that as "the last of his Family," who would be coming into "a very large Fortune," he wanted to see the boy made "fit for more useful purposes, than a horse Racer."2 However, as early as Custis' teenage years, George Washington began worrying about his stepson's work ethic.

Writing on January 26, 1769, George Washington sent a short note to Boucher. In the letter, Washington explained why Custis was late getting back to school after the Christmas holidays and expressed the hope that "Jacky will apply close to his Studies and retrieve the hours he has lost…he promises to do so, & I hope he will."3 Schoolwork, however, frequently took second place in the teenager's priorities, which caused his stepfather considerable grief. Custis attended Boucher’s school from 1768 to 1773, remaining even after the institution moved to Annapolis, Maryland.

These were very frustrating years for both George Washington and Reverend Boucher. Washington, whose own education had been curtailed by the death of his father, read widely to make up for his deficiencies. He very much wanted the young people in his care to be given the educational opportunities he himself had missed. Washington could not understand why the young man he helped to raise could not or would not see the need to apply himself at school. In a particularly telling exchange, written when Custis was only sixteen, Washington noted to Boucher that his stepson's mind was centered on "Dogs Horses & Guns," as well as "Dress & equipage."4 Almost as damning, from Washington's perspective, was Boucher's opinion that "one of the worst Symptoms" about Custis was the fact that "He does not much like Books," even though his schoolmaster had been "endeavouring to allure Him to it, by every Artifice I cou’d think of."5

One reason why Jack was so distracted from his schoolwork became obvious in the spring of 1773, when the nineteen-year-old announced his engagement to Eleanor Calvert, the fifteen-year-old daughter of a prominent Maryland family. George Washington was initially able to convince the young couple to postpone the marriage until after Jack had finished college and could "thereby render himself more deserving of the Lady & useful to Society."6 Custis was sent off to King's College (now Columbia University) in New York City in May of 1773. But less than a year later, on February 3, 1774, Custis and Calvert were married. In the intervening months, Martha Washington's remaining daughter Patsy had died at Mount Vernon, and the grieving mother wanted her son nearby, and Custis departed New York City.

In a letter sent to the president of King's College, Washington explained in December of 1773 that his stepson was leaving for good: "The favourable account you was pleas’d to transmit me of Mr Custis’s conduct at College, gave me very great satisfaction…but these hopes are at an end; & at length, I have yielded, contrary to my judgment, & much against my wishes, to his quitting College; in order that he may enter soon into a new scene of Life, which I think he would be much fitter for some years hence, than now; but having his own inclination—the desires of his mother—& the acquiescence of almost all his relatives, to encounter, I did not care, as he is the last of the family, to push my opposition too far; & therefore have submitted to a Kind of necessity."7

Jack and Nelly lived at Abingdon Plantation and had seven children, four of whom would survive, over the next seven years. Despite Washington's frequent disappointments in Custis, the young man described their relationship fondly. In looking back on their relationship, Custis noted in a letter to Washington that, "It pleased the Almighty to deprive me at a very early Period of Life of my Father, but I can not sufficiently adore His Goodness in sending Me so good a Guardian as you Sir." He went on to assure his stepfather that, "He best deserves the Name of Father who acts the Part of one. . . ."8

As the Revolutionary War came to a close, Custis decided to join his stepfather at Yorktown, the site of Washington's most celebrated victory. Soon after Cornwallis' surrender, however, young Jack was one of the hundreds of men who died of camp fever as contagions spread through the crowded camps of both American and British troops.