This entry was archived in 2020 and is no longer updated. To see the updated entry on Royal Gift, click the button below.

Royal Gift was the name of George Washington's most prized Spanish donkey that he acquired to live at Mount Vernon in 1785. Washington had long desired to own a Spanish jack ass to begin breeding mules, a cross between a male donkey and female horse. Believing the mule would revolutionize farming, he played an integral part in popularizing these animals in America and Virginia specifically. Mules are both better draft animals than horses, and they also require less feed, making them more economical. As a man who prided himself on economic efficiency, Washington was eager to embark on this new venture in animal husbandry. Washington wanted the best jack ass he could find to begin, and Spanish donkeys were considered the most superior of the breed. He was convinced that "a good Jack would be a public benefit to this part of the country."1 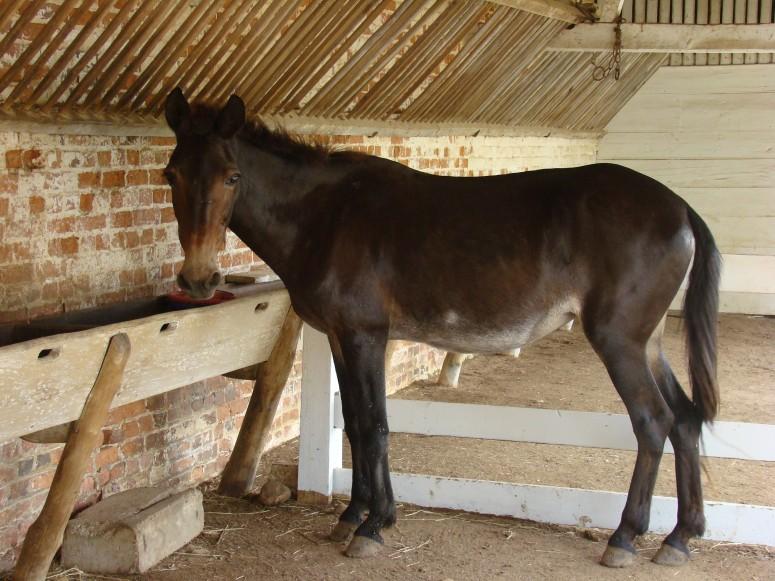 However, procuring a Spanish jack proved more difficult than Washington had imagined. The animals were expensive and it was illegal to export them from Spain without permission from the Spanish king. Washington originally asked Don Juan de Miralles, a Cuban merchant and agent to the Spanish King Charles III, to procure him a jack. Unfortunately, Miralles died in 1780 while visiting George Washington in New Jersey, so the transaction never took place.2 In 1784, William Carmichael—the U.S. chargé d' affaires at the Spanish court—made Washington's desires known to the Spanish king, who was happy to oblige. Thomas Jefferson revealed in a letter that when Charles III learned of Washington's interest in acquiring a Spanish jack, the king ordered "two of the very best to be procured & sent you as a mark of his respect."3 Royal Gift, as the jack was later named, and his Spanish handler arrived in Glocester, Massachusetts, on October 7, 1785.4 The second jack did not survive the journey across the Atlantic.

Washington dispatched John Fairfax, his overseer at Mount Vernon, to meet Royal Gift and his handler in Boston to escort them back to Mount Vernon. Washington was so concerned with the treatment of the jack that he instructed Fairfax to take plenty of resting breaks, provide the donkey with blankets, and see that "due attention & care are bestowed upon these animals."5 The journey back to Virginia took just under a month as the Spaniard insisted the donkey be walked no more than fifteen miles a day. Royal Gift arrived at Mount Vernon on the night of December 5, 1785.6

While at Mount Vernon, the jack was used as a stud to breed with jennies (female donkeys) and with mares to create mules. The jack was gray in color and had a strong, stocky, build, standing nearly fifteen hands high.7 Washington sent Royal Gift on a tour of the South to generate interest amongst fellow planters. He also ran several ads in local newspapers that advertised the price of the jack’s services. On March 23, 1787, an ad ran in the Maryland Journal stating that Royal Gift would cover mares and jennies for five Guinneas for the season.8 Planters across Virginia and nearby colonies lined up with their mares to request the jack's covering services during the spring season from April 1 to August 1. 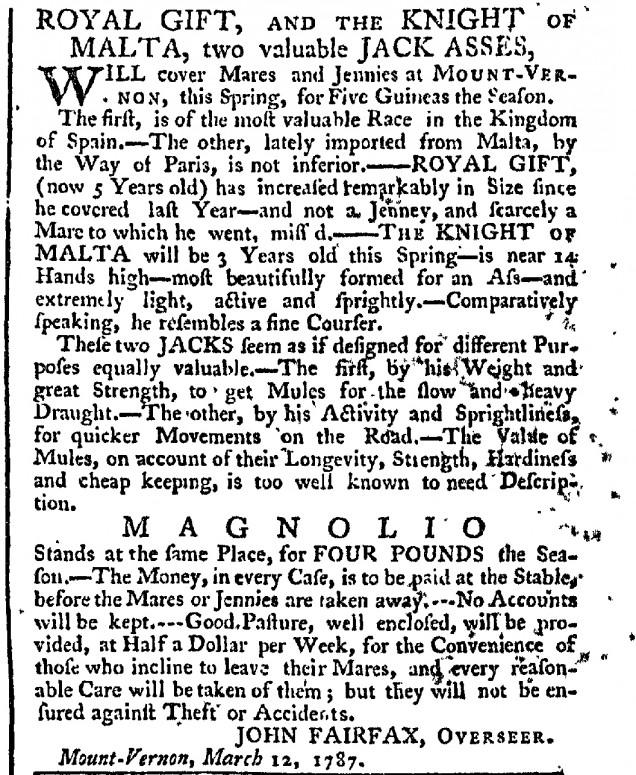 Unfortunately, Royal Gift was notoriously stubborn and slow to reproduce. Washington joked that the jack was "too full of Royalty, to have any thing to do with a plebian race."9 After many unsuccessful attempts at breeding the jack, Washington discovered the cure to Royal Gift's indifference. He instructed a few of his friends to keep two jennies with Royal Gift as stimulus "when he is in those slothful humours."10 The trick worked and the Spanish jack went on to sire many donkeys and mules over his lifetime. One notable descendent was another of Washington's favorite jacks named Compound. Compound was the offspring of Royal Gift and a jenny, which was the offspring of another favorite jack, the Knight of Malta.

Sadly, Royal Gift's glory was short-lived. He sustained severe injuries while on a journey to South Carolina in 1793 to work at the plantation of William Washington (a military colleague of George Washington). According to witnesses, the jack's handler drove him at such a rigorous pace that Royal Gift was left stiff and lame.11 Even worse, he was no longer able to fulfill his services as a stud. A concerned George Washington wrote to William Washington asking him to report on the jack's condition. William replied in January 1794 that the jack's "situation at present is not better & am apprehensive it ever will."12

Of the forty mares and jennies sent to Royal Gift the previous spring, only two foals were born.13 Due to these disappointing results, the two men agreed to quit advertising Royal Gift's services. William Washington offered to care for the jack in South Carolina as he believed the donkey was too lame to make the journey home to Mount Vernon.14 Whatever injuries the jack sustained on this fateful trip, it is unlikely he was ever used as a stud again. This was disappointing news to George Washington since he took the well-being of his animals very seriously. Washington explained years later that his jacks were to be treated with great care on the road, "the contrary of which, occasioned the loss of the old Spanish Jack."15

Royal Gift lived out the rest of his life in South Carolina until his death in July 1796.16 Washington then turned his attention to two other jacks, the Knight of Malta and Compound. These jacks were also successful at covering jennies and mares. Washington boasted that Compound "was remarkable for getting fine Mules" and that no amount of money would convince him to part with the jack.17 Compound continued his father's legacy at Mount Vernon and, today, many of the donkeys and mules in America can trace their lineage back to Royal Gift.