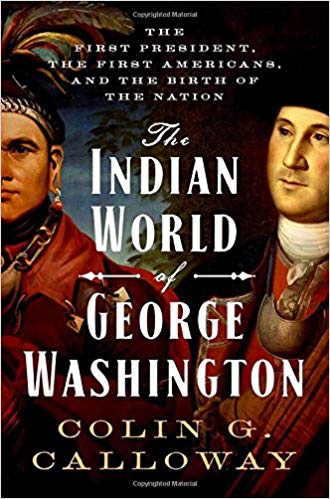 Award Ceremony to Take Place in New York on October 24

MOUNT VERNON, VA – Author and historian Colin Calloway has won the coveted George Washington Prize, including an award of $50,000, for his new book, “The Indian World of George Washington: The First President, the First Americans, and the Birth of the Nation.” One of the nation’s largest and most prestigious literary awards, now in its 15th year, the George Washington Prize honors its namesake by recognizing the year’s best new books on the nation’s founding era, especially those that engage a broad public audience.

Conferred by George Washington’s Mount Vernon, the Gilder Lehrman Institute of American History, and Washington College, the award will be presented during a special event at the Union League Club in New York City on October 24. More information about the George Washington Prize is available at www.mountvernon.org/gwprize.

In “The Indian World of George Washington,” Colin Calloway tells the fascinating story of Washington’s lifelong engagement with Native America. The book paints a new and, at times, disturbing portrait of the nation’s first president — as an untested militia officer on the banks of the Ohio, as a diplomat who gradually learned to work with Indians on their own terms and, during his final years, as a disappointed Indian land speculator. Unusual for a Washington biography, Shingas, Tanaghrisson, Cornplanter, Red Jacket, and Little Turtle, among many other native leaders, play leading roles in Calloway’s account. America’s first inhabitants, the book shows, were as central to the founding of the American republic as the nation’s first president.

“Colin Calloway is one of the best historians of the era,” said Mount Vernon President Dr. Doug Bradburn. “His monumental analysis of the Indian impact on George Washington’s life helps us understand a half century of powerful Native American history more clearly. This is a once in a generation study—a great winner!”

Established in 2005, the George Washington Prize has honored a dozen leading writers on the Revolutionary era including Lin-Manuel Miranda, creator of the hit musical Hamilton. For this year’s prize, a distinguished jury comprised of notable historians selected the seven finalists from a field of more than 50 books.

The George Washington Prize event on October 24 will also honor the six finalists for the 2019 prize:

Now celebrating its 25th year, the Gilder Lehrman Institute of American History was founded in 1994 by Richard Gilder and Lewis E. Lehrman, visionaries and lifelong supporters of American history education. The Institute is the leading American history nonprofit organization dedicated to K–12 education while also serving the general public. Its mission is to promote the knowledge and understanding of American history through educational programs and resources.

As a 501(c)(3) nonprofit public charity the Gilder Lehrman Institute of American History is supported through the generosity of individuals, corporations, and foundations. The Institute’s programs have been recognized by awards from the White House, the National Endowment for the Humanities, and the Organization of American Historians, and the Council of Independence Colleges. For more information: gilderlehrman.org.

Since 1860, more than 85 million visitors have made George Washington’s Mount Vernon the most popular historic home in America. A privately-owned national treasure, Mount Vernon is maintained and operated by the Mount Vernon Ladies’ Association. Since purchasing the estate from the Washington family and assuming stewardship in 1858, the Association has embraced a heroic mission to preserve, protect, and maintain the estate for the American people, relying exclusively on private donations, admission fees, and restaurant and retail proceeds. Through robust education and outreach programs, the Association expands awareness about the exceptional life and character of George Washington, sustaining his legacy through research, interpretation, and public education. In experiences on the estate and through its digital outreach platforms, Mount Vernon strives to preserve George Washington’s place in history as “First in War, First in Peace, and First in the Hearts of His Countrymen.” For more information: www.mountvernon.org.

Washington College was founded in 1782, the first institution of higher learning established in the new republic. George Washington was not only a principal donor to the college, but also a member of its original governing board. He received an honorary degree from the college in June 1789, two months after assuming the presidency. The college’s C.V. Starr Center for the Study of the American Experience, which administers the George Washington Prize, is an innovative center for the study of history, culture, and politics, and fosters excellence in the art of written history through fellowships, prizes, and student programs. For more information: www.washcoll.edu.