George Washington's visitors were delighted by bountiful offerings of fresh vegetables and fruits from Mount Vernon's gardens and reveled in after-dinner walks amongst all manner of plants. Today visitors can stroll through Washington's four gardens.

Intended as a formal garden for the enjoyment of the Washingtons guests, the upper garden contained a rich variety of plants in the highest state of cultivation, showcasing Washington’s skill as a gardener.

The design was rigidly symmetrical, offering a pleasing contrast to the curved lines of the bowling green. The garden was divided into six planting beds by wide pathways of gravel and packed clay, directing visitors’ steps as they walked. Washington planted espalier trees--fruit trees specially pruned to grow flat against the wall--indicating that their owner possessed both the financial resources and the labor force to maintain them. 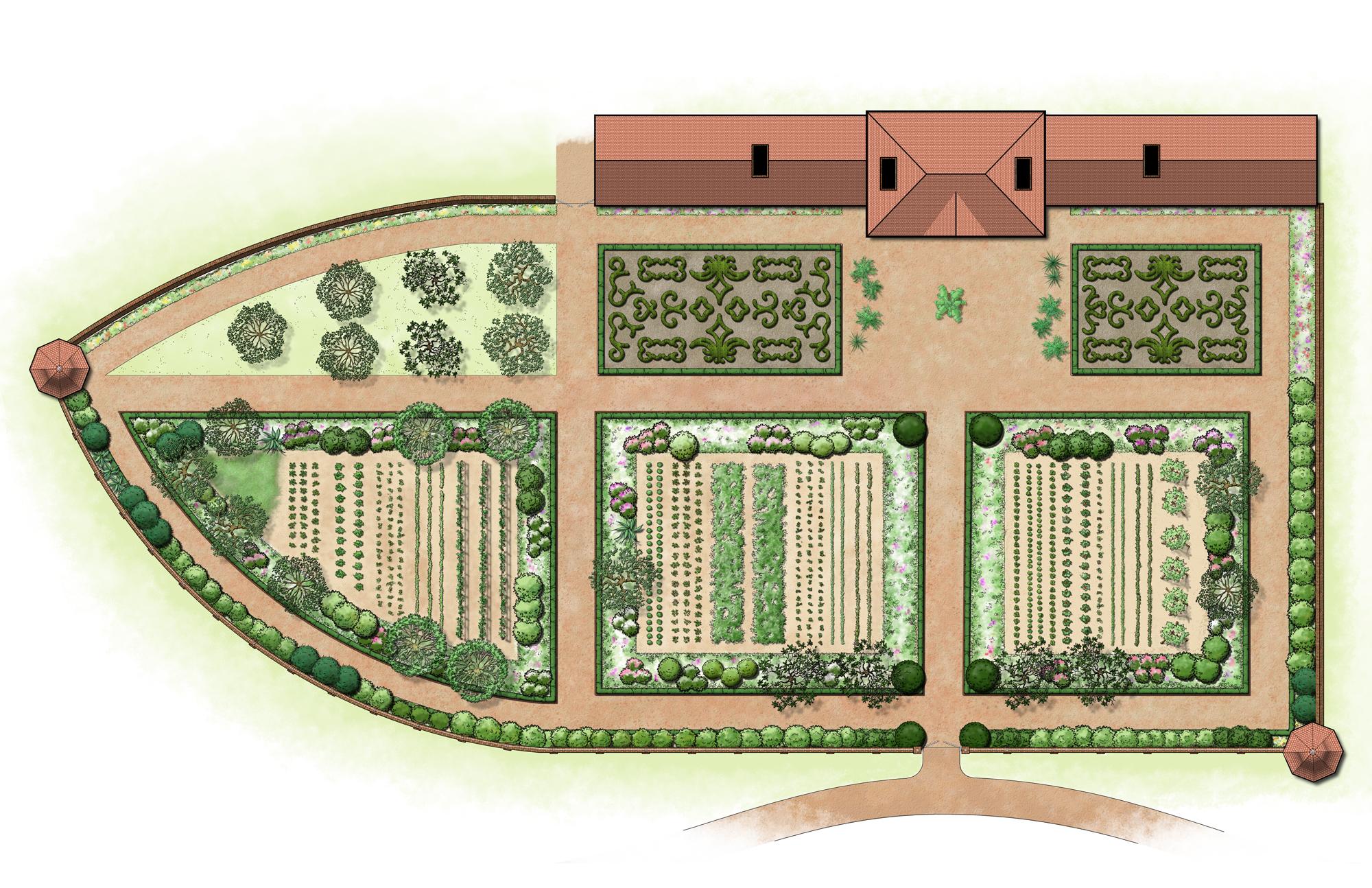 Map of the Upper Garden (MVLA)

At the center of each large planting bed, Washington planted rows of vegetables and fruit trees for household use. Highlighting the beauty of the practical plantings inside, each bed was “bordered with dwarf box wood interspersed with ornamental trees around the exterior of the inclosure,” with a wide band of flowering plants just inside the row of boxwood. Combining an attractive landscape with food production, these planting beds demonstrated the beauty of domestic agriculture. Washington also seems to have highlighted America’s revolutionary alliance with the French with a boxwood parterre “clipped and trimmed with infinite care into the form of a richly flourishing Fleur de Lis.”

The Greenhouse in the Upper Garden

As the focal point of the upper garden, George Washington built a commanding greenhouse (sometimes referred to as a hothouse). In this heated space, he cultivated delicate tropical plants that could not withstand cold Virginia winters. In addition to providing lemons, limes, and oranges for Mrs. Washington’s table, the greenhouse served as a gallery for exhibiting rare and unusual plants imported from around the globe, including an aloe vera from North Africa and sago palm from the East Indies.

When George Washington began planning the building in 1784, there were very few greenhouses in North America and none near Mount Vernon. Although he had seen several greenhouses in his travels, he was not familiar with the mechanics of the flues that heated the floor. He wrote his trusted aide, Colonel Tench Tilghman, seeking details of Margaret Tilghman Carroll’s greenhouse outside Baltimore. Combining these mechanical details with his own recollections and observations, Washington designed his own greenhouse.

Designed to be both beautiful and functional, almost every element of the building has a practical purpose. The thick brick walls provide a pleasing contrast to the white woodwork; they also retain heat and insulate the building. The five large windows with triple sashes add a vertical thrust to the design, but their primary purpose was to provide maximum exposure to sunlight from the south. The windows could also be opened at the top and bottom to allow for good air circulation. The wide, low wings added in 1792 balance the strong verticality of the central block and provided slave housing.

“…impress it on the gardener to have every thing in his garden that will be ne[ce]ssary in the House keeping way — as vegetable is the best part of our living in the country.”

To accomplish this, Mrs. Washington instructed Mount Vernon’s hired and enslaved gardener of the types and quantities of fruits and vegetables she would need for her enslaved cooks to transform into meals.

Before grocery stores and farmers markets, kitchen gardens were “a necessary support of life,” as one gardening manual observed. In the 18th century, every home outside the city had a vegetable or kitchen garden providing nutritious supplements to rural diets. Since the 1760s, Mount Vernon’s kitchen garden has been continuously cultivated for the production of vegetables. A visitor in 1782 observed, “There is an immense, extremely well-cultivated garden behind the right wing. The choicest fruits in the country are to be found there.” While the lower garden was not intended for pleasure, the gate off of the bowling green may have enticed visitors to peek inside.

Dean Norton, Director of Horticulture, describes the history and beauty of the Lower Garden at Mount…

“The garden is very handsomely laid out in squares and flower knots, and contains a great variety of tree[s], flower[s] and plants of foreign growth collected from almost every part of the world.”

The small botanical garden located behind the spinning house was not a major feature in Washington's landscape scheme. Yet this private, simple plot was close to his heart as he often tended it himself experimenting with new plant varieties.

One of Washington's goals for this cultivated space was to see if particular plants would be able to survive the harsh climate of Virginia. Foreign governments, friends, admirers, and even strangers supplied him with a steady stream of seeds, slips, bulbs, and cuttings from all over the world.

The nursery area was where plants that required more space were planted and they included grasses, vegetables, and ornamentals.

One of the earliest horticultural entries in Washington's diary is dated March 24, 1762, when he recorded the receipt of cherry trees from his neighbor Colonel George Mason of Gunston Hall. Fruit trees were frequently mentioned in his diaries as a large quantity of fruit was desired for meals, preserves, and for making cider.

In 1785, George Washington removed fruit trees from the upper garden to make room for vegetables, flowers, and 215 apple trees were received from a Major Jenifer. Washington planted trees within the garden enclosures and a fruit garden just below the Mount Vernon kitchen garden. He also added orchards to the outlying farms. Apples, pears, cherries, peaches, and apricots were the standard fruit trees grown at Mount Vernon. Washington's gardeners also grafted and trained these trees as espaliers, a method of training trees to grow on trellises or on brick walls. Apple and pear espaliers were planted on the interior of the garden around garden beds and the stone fruits such as peaches, cherries, and apricots were "nailed to the wall" by his gardeners.

A visitor in 1782 observed, "There is an immense, extremely well-cultivated garden behind the right wing. The choicest fruits in the country are to be found there." 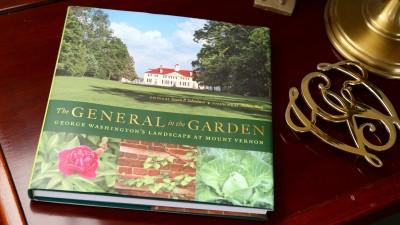 The General in the Garden

Explores General Washington's influence over the gardens at Mount Vernon and the preservation of the landscapes by the Mount Vernon Ladies' Association, which has been the caretaker since 1853.

Identify the names and details behind the amazing array of flowers, plants, shrubs, vegetables, and trees that can be found at Mount Vernon.