Lieutenant Richard Williams served in the Royal Welch Fusiliers during the American Revolution.

He arrived in Boston in early June 1775 and over the next several weeks painted in watercolor and drew in pencil the landscape around him. His work offers modern viewers unprecedented views of the American Revolution’s early days.

During his time in the colonies, Williams kept a journal, writing on June 12,

I went to the common & to Beacon hill, where I saw all our encampments, those of the Enemy. From this hill you have a view of the town and country all around it.

Williams painted a set of five topographical views forming a 360-degree view of Boston from Beacon Hill. He created them during his deployment to North America, resulting in the only known contemporary views of Boston at the outbreak of the Revolution. Below they have been stitched together to recreate Williams' view.

After the Battle of Bunker Hill, Williams spent a few more weeks in Boston. He was then directed to lead 50 troops by sea to Annapolis Royal, Nova Scotia. Along the way, on September 4, Williams described arriving in Annapolis.

…we came to anchor near the town of Annapolis. this little settlement was formerly more flourishing when the Fort was compleat & they had a garrison sometimes of a whole

The journal ends suddenly following this entry. No other journal is known to have survived, and Williams’s movements are unclear after September 1775. The following year the London newspaper Morning Post & Daily Advertiser ran Williams’ obituary, reporting that he died on April 30, 1776, at Penryn in Cornwall.

Williams’ five watercolors of Boston along with the majority of the artist's personal portfolio of maps and views were acquired by the Washington Library as a part of the Richard H. Brown Revolutionary War Map Collection. Ten additional watercolors, featuring views of Annapolis Royal, Nova Scotia, are held by the Art Gallery of Nova Scotia. His manuscript journal is in the Buffalo & Erie County Public Library. 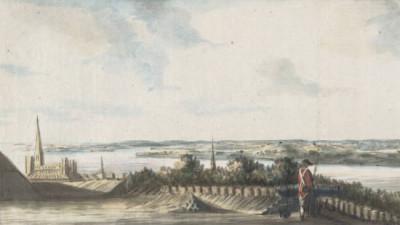 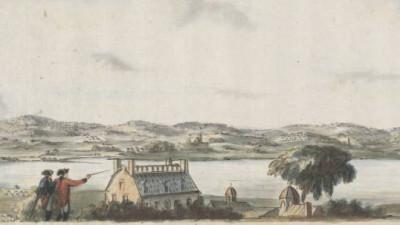 [Boston Neck, with the British lines and John Hancock's house] 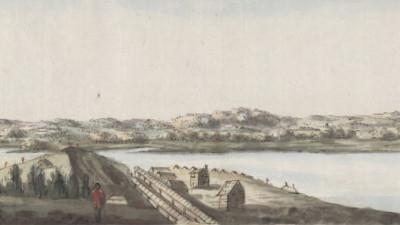 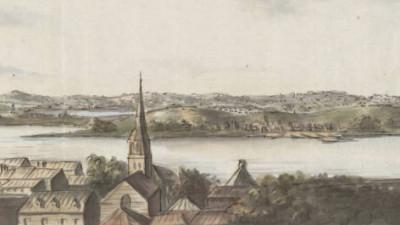 [Charlestown Promontory, the ruins of the town after the Battle of Bunker Hill and General Howe's encampment] 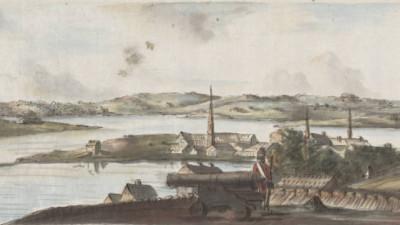 [Noddle Island and the Mill Pond]

Featuring over 1,000 individual objects that date between 1740 and 1799—including manuscript and print maps, bound atlases, watercolor view sheds, and other documents—the collection will offer new opportunities for researching and teaching the history of the American Revolution, Early Republic, and eighteenth-century cartography.

Williams, Richard. “Discord and civil wars; being a portion of the journal kept by Lieutenant Williams of His Majesty's Twenty-third Regiment while stationed in British North America during the time of the Revolution.” 1775. Buffalo: Easy Hill Press for the Salisbury Club of Buffalo, 1954. hdl.handle.net/2027/wu.89077176477.

Williams, Richard. “A journal: in part describing the battles of Lexington and Concord and Bunker Hill.” B&ECPL Digital Collections. digital.buffalolib.org/document/77.