In the early years of the American Revolution, George Washington faced an invisible killer that he had once battled as a teenager. While the earlier fight had threatened only his life, at stake in this confrontation were thousands, including military and civilian alike, the continued viability of Washington's army, and the success of the war for independence from Britain.

The unseen killer was smallpox, which Washington described in 1777 as a potentially greater threat "than…the Sword of the Enemy." Smallpox was typically brought to eighteen-century America by either English immigrants or recently-arrived slaves. Unlike in Europe, however, the majority of the American population led relatively isolated lives on farms and plantations. Outside of the coastal cities of Boston, Philadelphia, and Charleston, there was little chance of acquiring the disease. For example, there were no smallpox epidemics in the colony of Virginia prior to 1747.

In fact, very few Virginians were exposed to smallpox prior to the American Revolution. One of the few Virginians who was exposed was George Washington, who contracted the disease during his only trip away from the American mainland while visiting Barbados in November of 1751. Washington was only nineteen years old at the time and the illness, which lasted nearly a month, left him only with slight scarring. The brush with smallpox, however, did provide Washington with immunity from further attacks of the disease, the benefits of which would not become apparent until many years later.

The coming of the American Revolution, however, made the spread of smallpox more widespread. Soldiers arriving from England and Germany frequently brought smallpox to American shores. In addition, recruits from all over North America joined the Continental Army, increasing the scope of the disease. Within days of taking command of the army at Cambridge, Massachusetts during the summer of 1775, Washington wrote to assure the President of the Continental Congress that he had been "particularly attentive to the least Symptoms of the Small Pox," quarantining anyone suspected of having the disease in a special hospital. Washington further promised that he would "continue the utmost Vigilance against this most dangerous enemy." 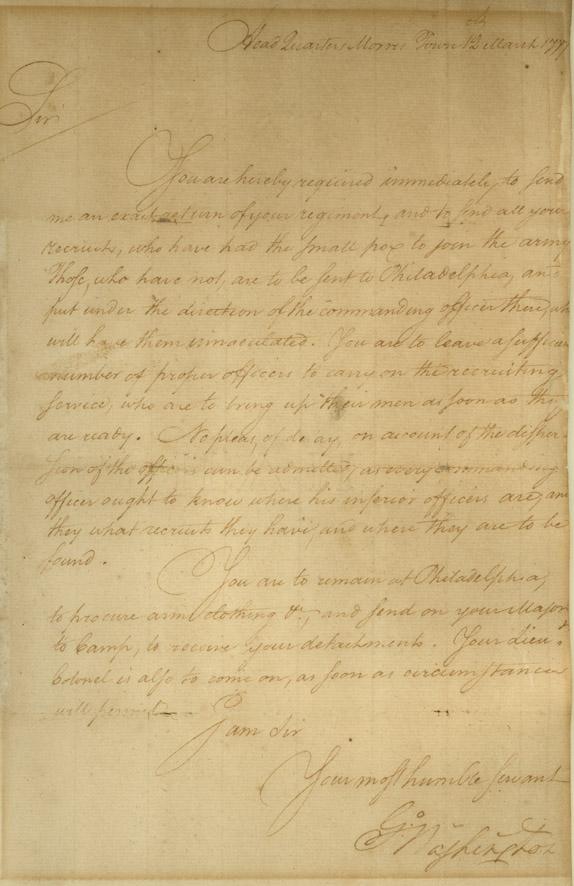 By the fall of 1775 Boston--which was under British occupation--suffered from a widespread smallpox epidemic that threatened to spread throughout the ranks of Washington's army. Reports even surfaced that the British deliberately sent infected people out of the city to expand the epidemic into American lines. In response, Washington forbade refugees from Boston to come near the American camp in order to avoid the risk of exposure. After the British left the city in March of 1776, Washington sent in a force of 1,000 smallpox-immune American troops to occupy Boston in order to avoid further spread of the disease. Smallpox continued to plague the Continental Army as well as the civilian population. Epidemics broke out in both Boston and Philadelphia in the summer of 1776, and the retreat of an American force sent to take Quebec was blamed on a number of factors including the high prevalence of smallpox amongst soldiers.

While Washington believed wholeheartedly in the efficacy of inoculation, in May of 1776 he ordered that no one in his army be inoculated; violations of this order would result in severe punishment. The summer campaigns were about to begin and Washington could not afford to have a large number of his men incapacitated for a month, vulnerable to attack by the British. Washington eventually instituted a system where new recruits would be inoculated with smallpox immediately upon enlistment. As a result soldiers would contract the milder form of the disease at the same time that they were being outfitted with uniforms and weapons. Soldiers would consequently be completely healed, inoculated, and supplied by the time they left to join the army.

George Washington to the President of the Continental Congress, 21 July 1775