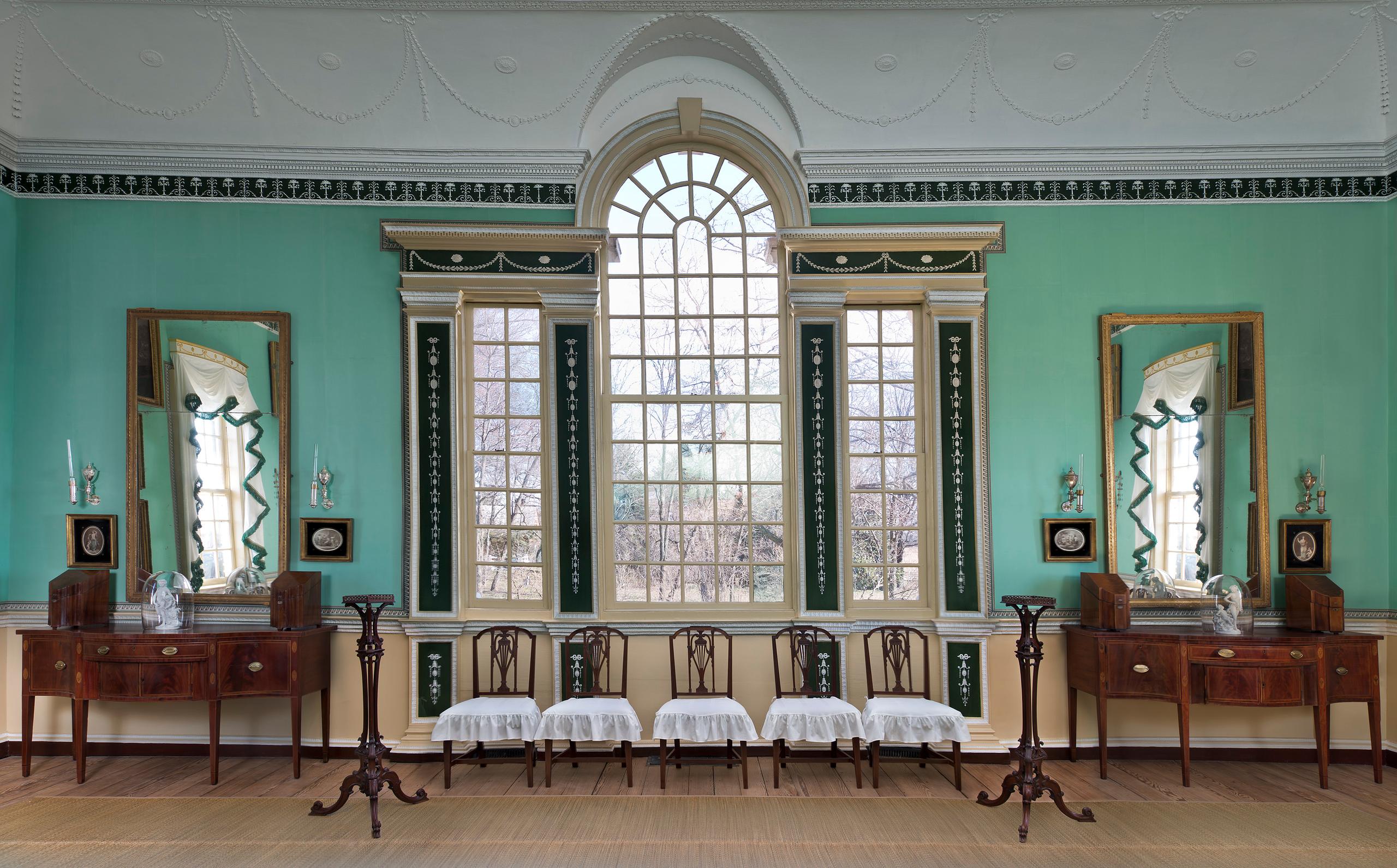 The Palladian (also called Venetian) window on the north elevation of the Mount Vernon mansion is one of the house's most distinctive features. The window illuminates the large dining room (known as the new room) planned by George Washington as part of his second wave of renovations to the house. Begun in 1774, craftsmen did not complete the room until 1787.

Called "the new room" by the Washingtons, the room is the largest, most public, and most elaborately decorated room at Mount Vernon. More than twice the size of the family dining room and running the building's full width, the room was large enough for the refined entertaining required as the General’s fame and importance grew.

Decorated in the latest contemporary English and colonial fashion with an agricultural theme, the room proclaimed Washington's sophisticated taste and desire to be identified first and foremost as a private planter. Highlights of the Neoclassical details include farm implements in the ceiling's stuccowork and pastoral scenes carved into the marble mantelpiece. Made of a large quantity of imported glass and providing a generous view of the Potomac River plantation, the Palladian window is an essential part of Washington’s program for the space. 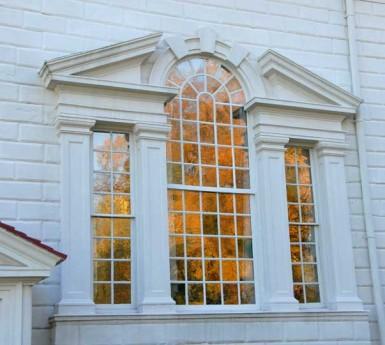 Few buildings in the colonies boasted such an elegant feature, though Washington might have seen a similar window on houses such as those designed by William Buckland in Maryland or on public edifices such as Pennsylvania's state house (known today as Independence Hall).1 Plate 51 of British architect Batty Langley's 1750 pattern book City and Country Builder's and Workman's Treasury of Designs, however, certainly inspired the window's design.

Because Washington did not own a copy of this common reference for colonial American builders, historians assume he borrowed one or that his English master workman, John Rawlins, possessed one.2 Like all British pattern book authors, Langley borrowed the concept for the three-part window from Venetian architect Andrea Palladio: the central arched portion is wider and taller than the identical, squared sidelights flanking it. A leading architect of the Renaissance, Palladio was inspired by ancient Roman forms such as the triumphal arch.

The dining room's window is a close study of the pattern book's plate, but not a direct copy. Just as in Langley's design, Doric pilasters divide the three-part window; the pilasters are paneled much like the piers on the east elevation's piazza. The interior is delicate to match the room's decoration, while the outside responds to the boldness of the cornice, faux-stone cladding, and the building's other exterior details. The window features a broken pediment with three voissoirs over the central portion on the exterior (as in Langley's drawing), but only a single keystone on the interior. Although the interior of the window interprets Langley's blocked base, it is finished with only a simple sill on the exterior.

Langley, Batty. The City and Country Builder's and Workman's Treasury of Designs, 1755.