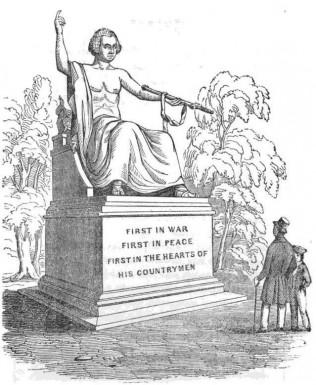 Horatio Greenough was one of the first American sculptors to receive international recognition for his talents as an artist and is perhaps best remembered for his colossal statue of George Washington. Completed in 1841, Horatio Greenough sculpted Washington to resemble one of the seven wonders of the ancient world, the statue of Olympian Zeus. Instead of gaining national admiration for his work, Greenough instead received harsh criticism for his half-draped statue of Washington causing his reputation as an artist in America to falter.

Greenough was born in Boston on September 6, 1805 and displayed artistic talents from an early age. Young Greenough travelled to Rome before the end of his senior year at Harvard in 1825, spending the first of many years studying art in Europe.1 The artist became friends with many influential people of the day, the most important being James Fennimore Cooper, whose patronage propelled Greenough's notoriety in America.2 By 1831, Greenough’s career was flourishing, building a reputation as an American artist schooled in the European style.

Washington's one-hundredth birthday generated an increasing interest in the American government to establish a monument to the hero of the American Revolution and first president of the United States. Through the efforts of Fenimore Cooper, Greenough was awarded the commission to design a full-scale sculpture of Washington for the United States Capitol rotunda. The artist spent the next seven years completing what he hoped would be one of his great achievements.3 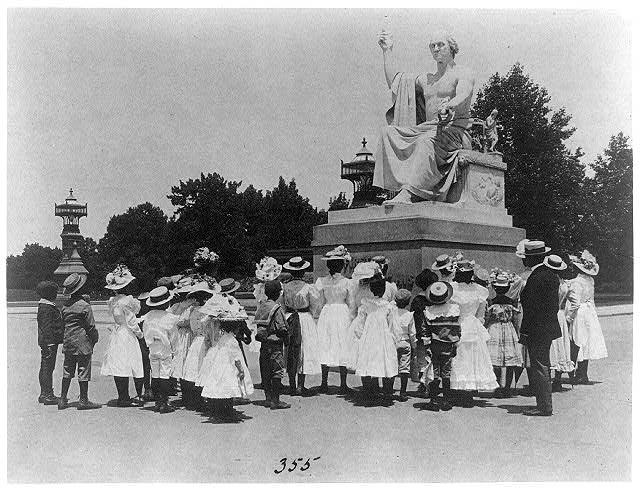 The enormous George Washington sculpture portrays the first president seated, draped in a toga with his chest exposed. His right hand stretches skyward while his left arm extends outward offering the hilt of a sword, signifying Washington's relinquishment of military power at the close of the revolution.

Inventor Samuel F.B. Morse wrote to his friend Greenough in 1834 expressing concern for the preliminary plans of the statue. The artist was undaunted by the criticism and wrote in reply: "We raise this monument because Washington's face and form are identified with the salvation of our continent. That sword, to which objections are made, cleared the ground where our political fabric was raised."4 Despite words of caution from many of his friends, Greenough refused to alter his vision.

George Washington was installed into the capitol in 1841. Many Americans found the shirtless Washington offensive and still others found it humorous.5 Greenough had pushed the European style of classicism too far for American tastes.6 Washington was moved to the capitol grounds and later to the interior of the Smithsonian Museum of American History in 1964.

Horatio Greenough never accepted that his Washington was ill received due to his artistic conception of the man, but rather blamed poor lighting and the unsuitable pedestal of the statue to explain the negative public reaction.7 Greenough died at the age of forty-seven after suffering from years of depression. His reputation never recovered the esteem he commanded prior to the unveiling of George Washington.