What alienated Benedict Arnold from the cause?

Benedict Arnold was a one of the great battlefield generals of the American Revolution, but left the Continental Army nonetheless. Author Nathaniel Philbrick discusses the factors that caused Arnold to leave the American cause.

West Point played a crucial role in keeping the new United States from falling to the British during the American Revolution, in the years before the area became known for its famed military academy. In 1781, George Washington called the fortified site “the most important Post in America.” 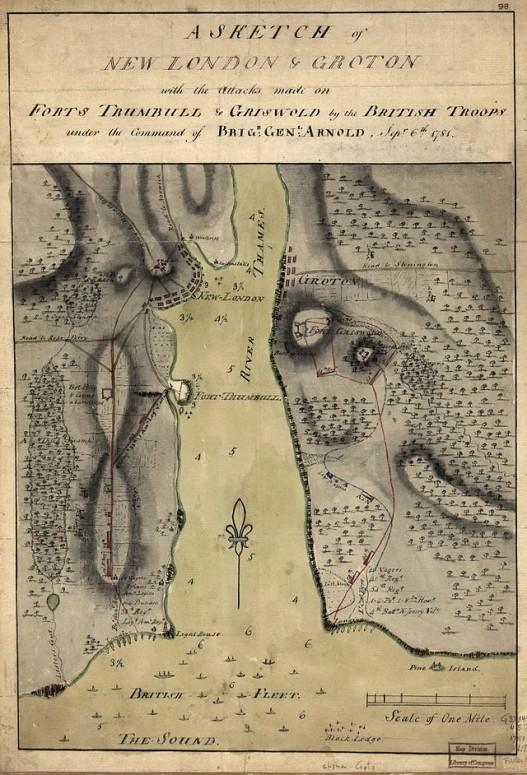 Connecticut was essential to supplying the war effort during the American Revolution because its coastline harbored privateers that captured almost 500 British ships and more importantly, vast stores of food, supplies, and ammunition.1 Additionally, it provided more troops to George Washington’s army than any other state except Massachusetts. Connecticut’s reputation as a key supporter of the Continental Army and harasser of British shipping earned the small state the praises of George Washington and the attention of the British who launched several destructive raids there in 1777, 1779, and 1781.2

The first raid began on April 25, 1777 when Sir Henry Clinton ordered the royal governor of New York, Major General William Tryon, and nearly 2,000 British soldiers to destroy the American supply depot at Danbury, Connecticut.3 After sailing from British-occupied New York and landing on the Connecticut coast, the small army marched inland towards Danbury. However, the local militia had spotted the ships and raised the alarm hours previously. The gathering militia harassed the small British force all the way to Danbury where the British burned houses and buildings used to store military supplies.4

With ever larger numbers of militia gathering nearby, the British began returning to their ships. Among the militia's leaders were Generals David Wooster and Benedict Arnold. Wooster lost his life attacking the British rear guard. Meanwhile Arnold unsuccessfully attempted to cut off the British retreat at Ridgefield, where in a minor engagement the British quickly overcame the American defenses. On April 28, 1777, the British boarded their ships and returned to New York.5

In the second raid on Connecticut in July 1779, Clinton ordered Tryon, 2,600 troops, and a fleet of transports to raid the coastal towns of New Haven, Fairfield, and Norwalk. Their purpose was to destroy supplies and privateers, and to lure General George Washington’s army away from its defensive positions near West Point so that Clinton could attack. Using his fleet of transports, Tryon landed at New Haven and then at Fairfield almost without warning. Local militias had little time to gather to repel him before his army burned supplies and returned to their ships. Connecticut’s defenders, guessing that Norwalk would be Tryon’s next target, appeared in large numbers to force his retreat on July 12, 1779. However, the fighting led to the almost complete destruction of the town.6

Because Tryon burned not only houses that held supplies but also those from which militia had fired on British soldiers, for the rest of the war grim depictions of his actions galvanized patriotic support across New England. After burning Norwalk, stories about Tryon sitting in a rocking chair and admiring the burning town appeared in newspapers.7 Many British even criticized Tryon because any strategic effect of the raids was largely mitigated by the surges in American recruitment that followed.8

The third and final raid on Connecticut commenced when Benedict Arnold returned on September 6, 1781, this time at the head of 1,732 British troops. His orders were to combat privateering in New London and to distract Washington from marching to Virginia, where the decisive battle at Yorktown would begin in late September.9

As the British fleet approached, Lieutenant William Colonel Ledyard waited with a force of 165 men in Fort Griswold, which defended Groton Heights opposite New London’s harbor, firing two warning shots to alert the local militia. However, because Arnold timed one cannon to fire once Ledyard’s gunners had finished, the militia heard three cannons fire, which was the signal that a captured vessel was entering the harbor. Consequently, few militia came to the town’s defense.10 Arnold led the attack on New London, easily scattering its few defenders. Although he forbade looting by his troops and personally supervised the destruction of supplies and warehouses while offering protection to many civilians, the destruction went further than expected. The town had a large store of gunpowder, and a privateer that was set alight exploded and flames spread through much of the town.11

While Arnold led the attack on New London, approximately half his force led by Lieutenant Colonel Edmund Eyre attacked Fort Griswold across the harbor. Arnold realized too late the strength of Fort Griswold’s design and position. Eyre’s men attacked for nearly thirty minutes, suffering heavy casualties before they settled into covered positions. Then when a stray British shot severed the American flag from its post, the British mistakenly believed the defenders had surrendered.12

Upon seeing the British advancing to accept the supposed surrender, the fort's defenders resumed their fire. The British, thinking they had been fooled, savagely attacked the fort and overwhelmed the defenders. Enraged British soldiers proceeded to bayonet most of the then-surrendering garrison. Of Ledyard’s 165 men, 3 were killed during the assault; after attempting surrender another 83 lay dead, including Ledyard himself, and 36 more were wounded. Of about 800 British attackers 48 had been killed and 135 wounded.13

Arnold's attack was extremely controversial. Eyewitness accounts exaggerated the cruelty of the British, and of Arnold’s role in the disaster at Fort Griswold. Sergeant Stephen Hempstead, a Connecticut man who was wounded in the attack, misrepresented the facts, but his version of the story became widely accepted. Hempstead claimed that the American wounded were tortured and that Ledyard was killed while surrendering his sword to a British officer. After the war, Hempstead changed his story.14 Meanwhile, the British general Clinton believed Arnold’s losses were inexcusable.15 Perhaps worst of all for the British, the entire strategy on which the raid was premised failed. George Washington never came to defend Connecticut. He went to Yorktown, where the British surrendered to him in October 1781.

6. Charles Townshend, The British Invasion of New Haven, Connecticut, together with some account of their landing and burning the towns of Fairfield and Norwalk, July 1779 (New Haven, Conn.: Tuttle, Morehouse and Taylor Printers, 1879), 33-49.