Based out of the Jacob Purdy House, George Washington's headquarters during the Battle of White Plains, the White Plains Historical Society offers information about the battle. 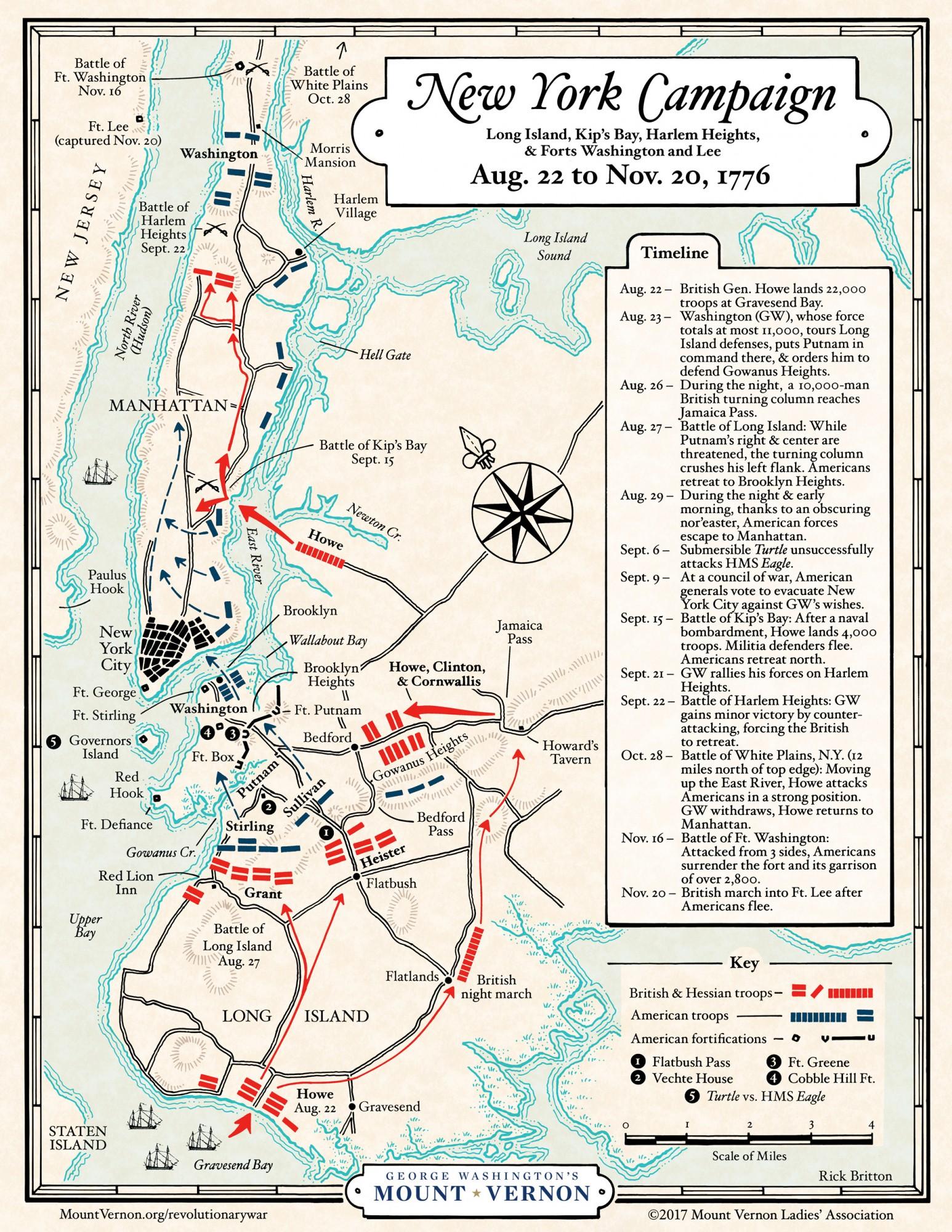 The Battle of White Plains on October 28, 1776 ended in defeat for General George Washington and his army as they retreated from New York City following a series of British victories earlier that summer. Washington attempted to make a stand on a stretch of high ground to allow for the orderly consolidation and evacuation of personnel and much needed supplies. British forces under General Lord William Howe failed to trap the Continental Army on Manhattan but were still able to envelop this position on a critical piece of terrain and force Washington’s army to retreat. The loss at White Plains and the successful British capture of Forts Washington and Lee on the Hudson River demonstrated the continuing tactical limits of Washington and the Continental Army. In the aftermath, Washington dispersed his army throughout the Hudson Highlands and New Jersey to avoid further calamity.

After successfully holding its ground against the British at the Battle of Harlem Heights in September, Washington’s army remained at the northern end of the island of Manhattan for several weeks waiting for the British to resume operations. In early October, after a significant delay typical of his initial campaigns against Washington, Howe finally made his move. Howe sent several thousand British and German soldiers by boat up the East River to make an amphibious landing at Throgs Neck in Westchester County in an attempt to envelop and trap Washington’s army on Manhattan. On October 12, American forces prevented the British from gaining a foothold by blocking the fords and causeways connecting the landing point to the mainland. Washington, however, realized he was in danger of being trapped and decided to extricate his force to the “advantageous Grounds” north of Manhattan.1 Washington believed a series of low hills near the American supply depot at White Plains would provide good terrain for his defenders to repeat their effective performance against British frontal attacks on Harlem Heights. A successful defense would allow the Americans time to evacuate crucial supplies away from the enemy into the Hudson Highlands north of New York City.2

As Washington prepared to move to White Plains, he and his subordinates discussed what to do with the garrisons in Forts Washington and Lee on the opposite sides of the Hudson River north of New York City. Washington was inclined to abandon the forts, but his subordinates convinced him that they could and should be retained. Howe, meanwhile, had abandoned his attempt to land men at Throgs Neck and landed further north and east on October 18. Fighting off American resistance, he began to land over 10,000 British and German soldiers. The Americans began to leave Harlem Heights that same day and Washington arrived at his new headquarters in White Plains on October 22. The slow pace of British maneuver and American resistance along the narrow roads and walls of Westchester County meant Howe had once again failed to trap Washington’s army. 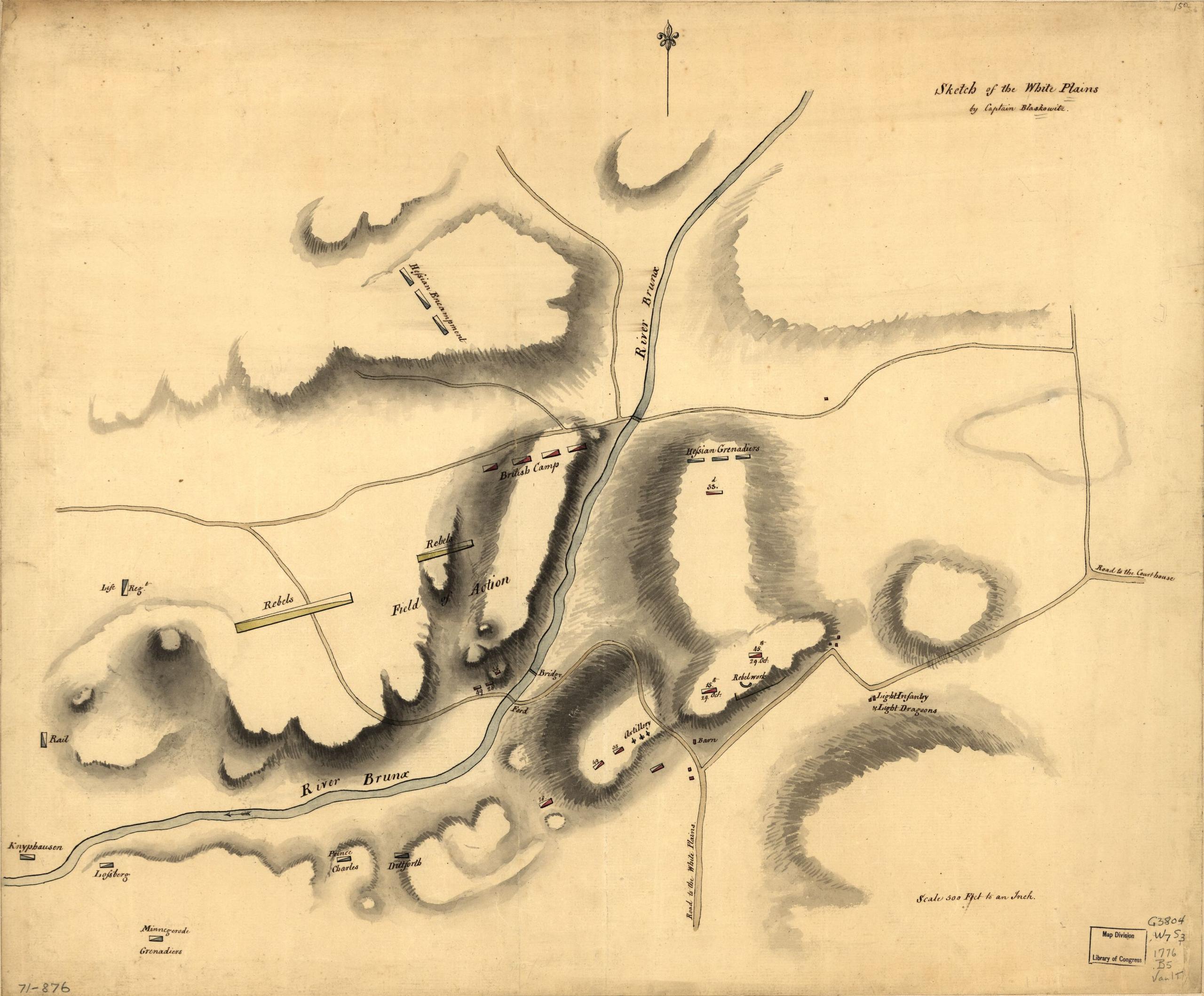 As the British force closed in on the Continental Army at White Plains, Washington prepared his Army for the coming battle. He anchored the American right on Purdy Hill near the Bronx River and the left on a large pond. Washington did not initially occupy Chatterton’s Hill, which was to the right of the American lines.

At 10:00 a.m. on October 28, 1776, Howe ordered columns commanded by Lieutenant General Sir Henry Clinton and Lieutenant General Leopold von Heister to advance on the American position. Washington initially dispatched about 1,000 soldiers commanded by Joseph Spencer to slow the advance of the British and German columns. While Spencer’s command fought its delaying action, Washington decided to extend his right to include Chatterton’s Hill. Spencer and his men fought until they were in danger of being enveloped and then retreated to the main lines under the covering fire of the Continentals and militia who had just arrived on Chatterton’s Hill under the command of Major General Alexander McDougall.

At this point in the battle, both commanders seemed to have fixed on the importance of this hill. Washington sent his engineer, Colonel Rufus Putnam, to begin building entrenchments while Howe dispatched eight regiments (approximately 4,000 soldiers) and 20 British cannons to attack the hill. British cannon forced the Americans to abandon the two field guns on the hill, but American musket fire repelled the initial British assault. Then, a Hessian force led by Colonel Johann Rahl, reinforced by British cavalry, struck the militia on the extreme right of the American line and the militia began to retreat in disorder.

The exposure of the right made Washington’s position untenable, but his Continental forces retreated northward in generally good order and the major fighting was over by 5:00 p.m. Washington informed his brother that he had inflicted 300-400 casualties on the British and lost about 150 killed and wounded.3 As at the earlier battles on Long Island, however, an envelopment by British and German regulars against militia on the flank of Washington’s line had unhinged what was a relatively strong position and the British had won a clear tactical victory.

Once again, though, the British could not or would not use this victory to crush Washington’s army completely. The Americans retreated northward on November 1 and Howe returned to New York on November 4-5 to turn his attention to capturing Forts Washington and Lee. After waiting a few days to verify Howe’s intentions, Washington dispersed his army to Peekskill, New York, and Newark, New Jersey. The next few months saw further setbacks for the American cause. Howe captured both of the Hudson River forts by the end of November, and Washington’s rapidly shrinking army retreated across New Jersey until it was finally able to launch its vital and justly famous counterstrokes against the British and German forces at Trenton and Princeton at the end of December.