Nearly every United States president has paid a visit to George Washington's home. But especially in recent years, Mount Vernon has welcomed many First Ladies, too.

During the visit, the ladies were greeted by Mount Vernon's president Curt Viebranz and Vice Regent Gail Berry West. The FLOTUS delivered remarks and dined with the governors' spouses in the Library's Rubenstein Hall.

First Lady Michelle Obama, her daughters Malia and Sasha, and her mother Marian Robinson, visited the Mount Vernon estate in early August 2009, following in the footsteps of presidential family members who have paid their respects to George Washington over a period of some 200 years.

SPRING 2001 AND OTHER OCCASIONS

Comparatively speaking, Mrs. Bush is a "Mount Vernon regular." When the Bush family lived in Northern Virginia in the late 1980s, Mrs. Bush and her daughters brought out-of-town friends to the estate "five or six times."

First Lady Hillary Clinton hosted a luncheon at Mount Vernon for the spouses of governors who had come to Washington D.C. for the annual meeting of the National Governors’ Association. 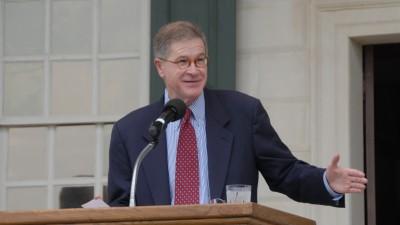 Guided by Rees’ vision, Mount Vernon expanded its mission to educate the wider public about the singular leadership and unparalleled legacies of our nation’s first and greatest president. During his 1994-2012 term, Rees oversaw fundraising efforts totaling more than a quarter billion dollars for projects designed to bring George Washington back into the national spotlight.

While viewing the Washington bedroom, Mrs. Yeltsin was particularly interested to learn that it was Martha Washington, not her husband, who ordered the extra-long bed. And in the study, after Miss Meadows pointed out the table on which George and Martha Washington had their wedding breakfast.

Mrs. Bush remarked to Mrs. Yeltsin "I read in the paper that when you were married, you didn't have a table." Mrs. Yeltsin nodded, and Mrs. Bush added, "They were lucky."

First Lady Rosalyn Carter accompanied a group of wives of Latin American dignitaries to Mount Vernon on September 8, 1977. The ladies and their husbands were in Washington for the signing of the Panama Canal Treaty.

Mr. President, we feel a special satisfaction because you are our guest tonight and because we feel that what Mount Vernon stands for is understood by you. Mount Vernon means to us not merely a beautiful home, but it also is, we hope, the symbol of the United States--in the past, the present, and we hope the future.

In addition to her much-heralded state dinner at Mount Vernon for Pakistani President Ayub Khan in 1961, she also came out to the estate the following year, just to have a peaceful place to ride her horse.

Just as her husband realized that his every action might set a precedent for future presidents, so was Martha Washington aware that her behavior as first lady would become the template for the wives of future chief executives.

"Lady Bird" Johnson came to Mount Vernon on several occasions as First Lady, and at least once prior to that.

Mrs. Roosevelt came out to Mount Vernon many times during her husband's presidency. One highlight was her 1939 visit with King George VI and Queen Elizabeth.

President Herbert Hoover and Mrs. Hoover commemorated Washington’s birthday in 1930, motoring down and placing a wreath in the Tomb.

During the last year of President Theodore Roosevelt's term, his youngest son, Quentin, attended school near Alexandria, Virginia. His mother, Edith planned various excursions for him to places of historic interest, including Mount Vernon.

President and Mrs. McKinley visited Mount Vernon 1898. It distressed all present to note the frail physique of Mrs. McKinley who was actually carried from room to room, but withal was cheerfully intent on seeing everything of interest.

President and Mrs. Harrison accepted the invitation of the Regents and Vice-regents of Mount Vernon to attend the Council of the Mount Vernon Association in 1890, and appeared to enjoy greatly the entertainment tendered them.

Mary Todd Lincoln came to Mount Vernon with some friends on March 26, 1861. She and her guests were given a tour by Superintendent Upton Herbert, and enjoyed lunch of bread, butter, and ham.

The second First Lady of the United States visited with Martha Washington in early 1800 after George Washington’s death in December 1799.

George and Martha Washington were married on January 6, 1759. They moved to his family home, Mount Vernon, several months later.