While the Continental forces were gathered in small shelters at Valley Forge, the British were holding a "Meschianza" in Philadelphia.

Valley Forge was a critical period for the Continental Army, not the least because the Baron von Steuben instituted a series of reforms that helped professionalize the army and make them better soldiers.

Valley Forge was the site of the 1777-78 winter encampment of the Continental Army. The park commemorates the sacrifices and perseverance of the Revolutionary War generation.

Throughout the American Revolution, General George Washington often remarked that he would rather be home at Mount Vernon. Despite his wishes, Washington did not return to his plantation on the Potomac from the moment he accepted his appointment as the Commander-in-Chief of the Continental Army in 1775 until after the American victory at Yorktown in 1781. Even under the most trying conditions, including his army's winter encampments, Washington remained with his soldiers. 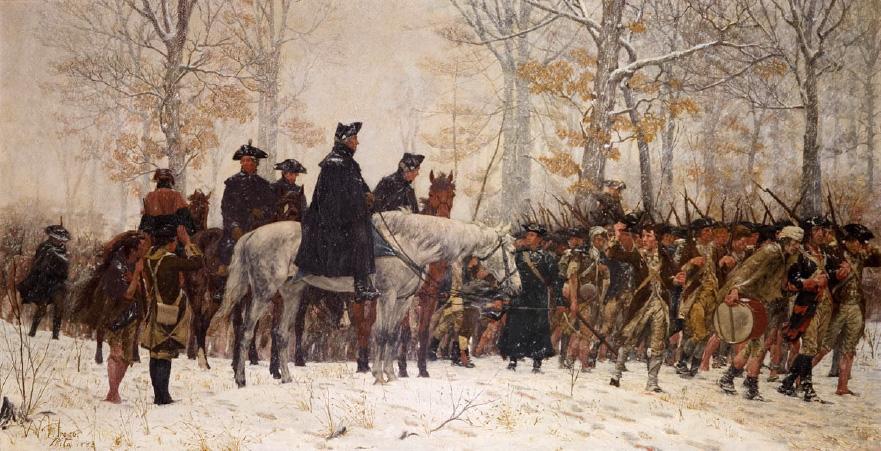 During the winter of 1777 to 1778, Washington camped with his troops at Valley Forge, nearly twenty miles north of Philadelphia. Images of bloody footprints in the snow, soldiers huddled around lonely campfires, and Washington on his knees, praying that his army might survive often come to mind when people hear the words "Valley Forge." But truer images of the place would show General Washington using the time between December 1777 and June 1778 to train his men and to fight to maintain his position as the head of the Continental Army.

Washington chose Valley Forge as the winter encampment for his 11,000 men along with approximately 500 women and children who accompanied them for several reasons. First, the lay of the land made Valley Forge a natural fortress. The army's camp sat high on a plateau at the top of a series of hills that protected it. The soldiers lived in huts built on the plateau and continued training on the parade ground at its center. Secondly, Valley Forge was far enough away from the rich farmland north of Philadelphia to prevent the army from becoming a burden on the local population. Lastly, Valley Forge was close enough to the occupied capital of Philadelphia for the Continental Army to keep an eye on the British and prevent any surprise attacks on settlements in the countryside. As Washington explained, if the army was farther away, then "many of our friends would be exposed to all the miseries of the most insulting and wanton depredation."1

As his army marched into Valley Forge on December 19, Washington hoped that his officers and soldiers, with "one heart" and "one mind," would surmount the troubles that lay ahead of them.2 The lack of proper clothing was a significant problem. While Washington knew most of his men were fit for duty, he calculated that at least a third of them had no shoes. Many did not have a decent coat to protect against the constant rain that plagued the camp.

Washington ordered his soldiers to build wooden huts for themselves, twelve by twelve feet each, and then search the countryside for straw to use as bedding. He hoped this would keep them warm since there were not enough blankets for everyone. Even worse, his quartermaster reported that he had just twenty-five barrels of flour and only a little salt pork to feed the entire army. As Washington explained in a letter to Henry Laurens, the President of the Continental Congress, unless something was done quickly, "this Army might dissolve."3

Promising to "share in the hardship" and "partake of every inconvenience," Washington moved with his closest aides into a two-story stone house near Valley Forge Creek.4 He spent much of his time writing to Congress, demanding more supplies for his men, while defending himself against charges of incompetence and dictatorial ambitions. He complained of a "malignant faction," led by Horatio Gates, the hero of Saratoga, Thomas Mifflin, the nation's former Quartermaster General, and Thomas Conway, a French soldier of Irish descent, who had recently been named to the Board of War by Congress.5 They had been given the authority to oversee the war effort on equal terms with the Commander in Chief. 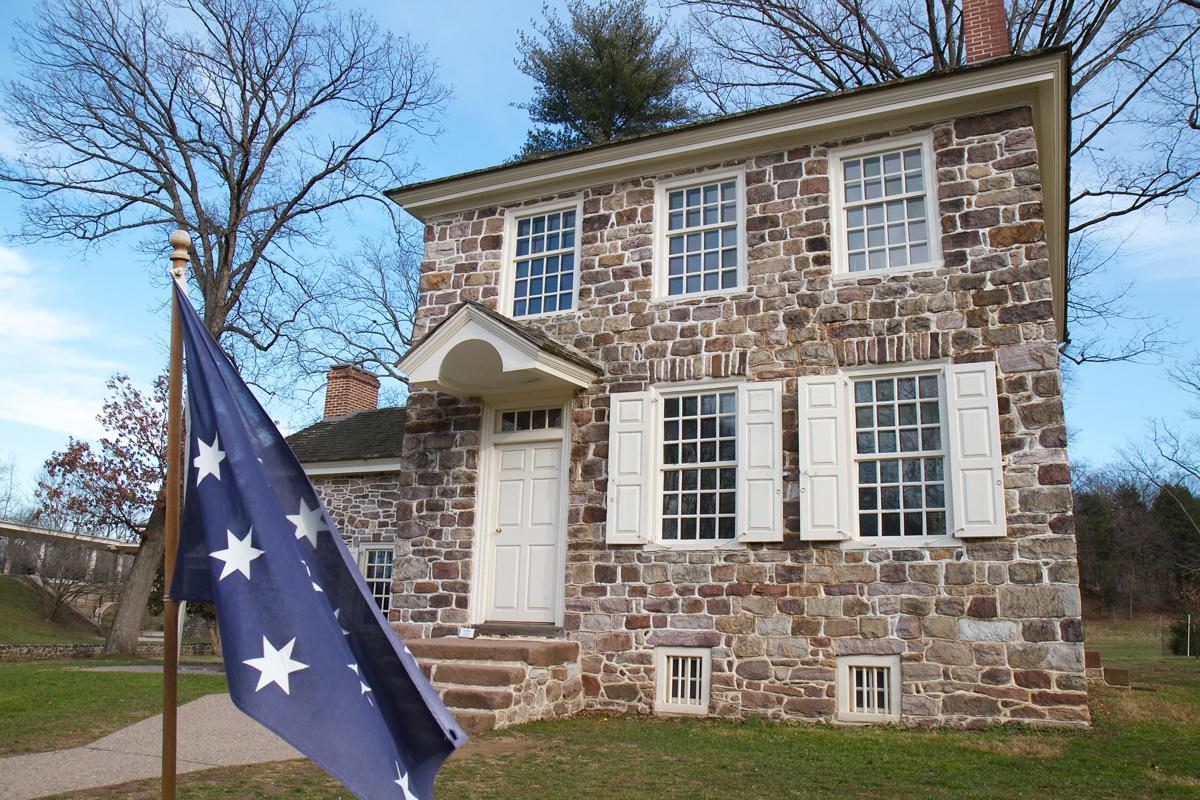 As he fought to maintain his position as the Commander-in-Chief, Washington received key support from several officers. General Henry Knox wholeheartedly agreed with his choice of Valley Forge as the army's winter encampment and built fortifications on its hills to defend against British attacks. Two younger generals—Nathanael Greene and Anthony Wayne—took on the humiliating task of scouring the countryside for horses, cattle, sheep, and hogs for the Continental Army at their commanding general's request.

The Marquis de Lafayette, a young French nobleman, organized officers from France, Poland, and other European nations into the Corps d'Étrangers. Baron Friedrich von Steuben, a Prussian military officer, provided important training for the American troops. As the drillmaster of Valley Forge, he taught the soldiers how to use the bayonet, and most importantly, how to re-form lines quickly in the midst of battle. Washington also received help from his wife Martha who arrived from Mount Vernon in February. She took over the management of his household, helped with his correspondence, and cheered him by entertaining guests.

By the early spring conditions at Valley Forge greatly improved. Washington appointed General Greene as the new Quartermaster General and he set up an efficient operation for bringing supplies into the camp. The rainy weather continued to be a problem, but the mood of the camp brightened when news of the Franco-American alliance arrived in May. Washington ordered his troops to line the parade ground and shoot off their guns one by one in celebration.

Finally, on June 19, the Continental Army—better trained and more determined than ever—marched out of Valley Forge. Washington, who proved his leadership, remained their commander. Together they headed for New Jersey where they would make a stand against the British army, on its way from Philadelphia to New York, at Monmouth Courthouse.