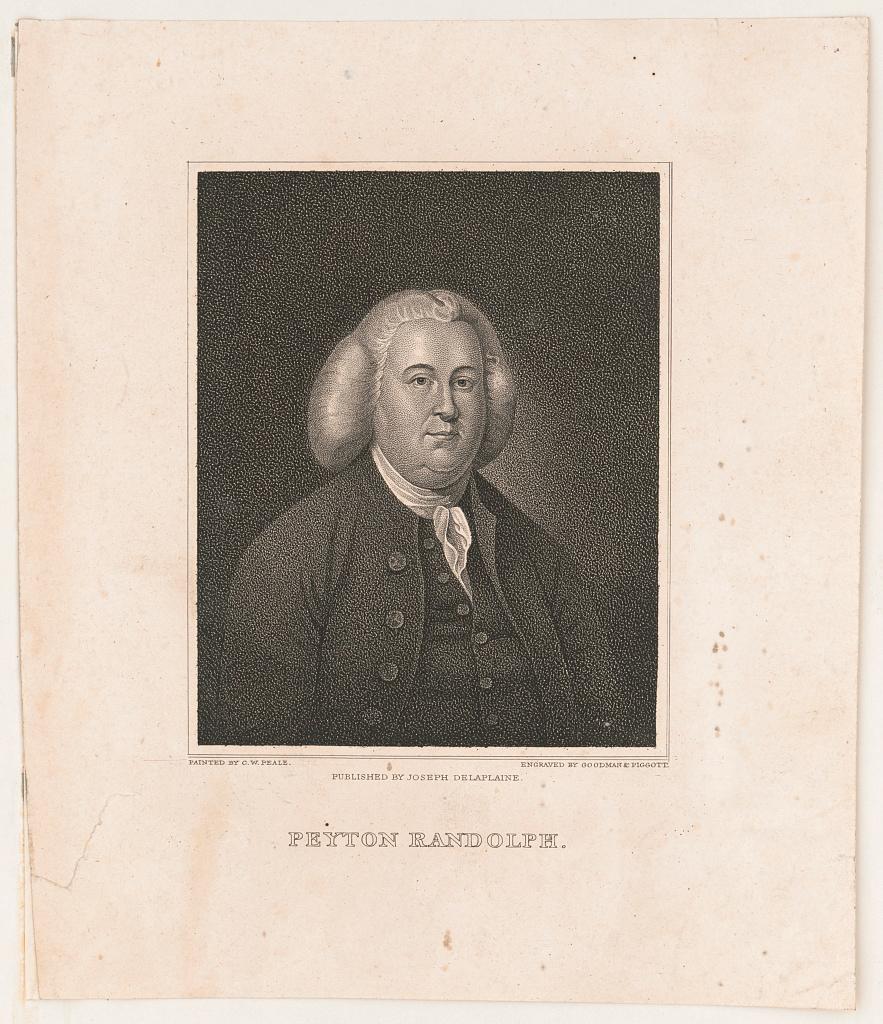 Randolph was born in Williamsburg, Virginia, on September 10, 1721, to a wealthy Virginian family. His father, Sir John Randolph, was a barrister at law who served as Speaker of the House of Burgesses (1734-1736) and Attorney General. The Randolph family was distinguished in America and in England. Sir Thomas Randolph (1523-1590) was an advisor for Queen Elizabeth I.1 Peyton Randolph had two siblings, a brother and a sister; his younger brother John also pursued politics, becoming Attorney General of Virginia in 1766. Peyton Randolph graduated from the College of William and Mary in Williamsburg, VA, then studied law in England at the Middle Temple of Gray’s Inn, a prominent law school. Following his legal education, Randolph was appointed the Crown’s Attorney General for Virginia in 1748 and was elected to the House of Burgesses. He performed both duties until 1766, when he gave up his position as Attorney General upon his election as Speaker of the House.

While Randolph held public office, he became involved in the imperial conflicts that preceded the American Revolution. Robert Dinwiddie, Royal Lieutenant Governor of Virginia from 1751 to 1758, had lived in the colony for only a few years before he offended and outraged the House of Burgesses. In 1753, Dinwiddie decided to enforce a pistole (a Spanish gold coin) fee for new land grants in the colony, a policy approved by the British Board of Trade. Thomas Jefferson described this action as an overuse of power “without the sanctions of any law.”2 The fee outraged prominent Virginians—especially those who intended to expand their landholdings. In response, the House of Burgesses nominated Peyton Randolph to petition the decision to King George II. Randolph arrived in London at the end of 1754 but failed to sway the king’s Privy Council. Although the Pistole Affair did not result in large-scale protest or any violence, it anticipated later resistance to British authority by galvanizing Virginians against the Crown and taxation without representation.

During the French and Indian War Randolph commanded a group of reservists. When Edward Braddock’s forces were defeated at the Battle of Monongahela in 1755, Virginian militia forces unified in an attempt to protect landowners across the colony. Randolph, as perhaps the most prominent Virginian at the time, led one group of around 300 men—called the “Associators.” In a letter to Colonel George Washington on May 3, 1756, Randolph described how “Some public spirited Gentlemen have done me the honor to fix upon me as their leader, till we can come to the place where you command; when we shall be very glad to follow such orders, as you shall think most conducive to the public good.”3

Parliament’s attempts to tax the American colonies following the conclusion of the French and Indian War renewed American resistance to British rule. In Virginia, the House of Burgesses selected Randolph to draft a petition to George III against the proposed Stamp Act. Despite his best efforts, Parliament passed the Stamp Act in early 1765.

Randolph became Speaker of the House in 1766. Thomas Jefferson later described the speaker as “Altho’ not eloquent, his matter was so substantial that no man commanded more attention; which, joined with a sense of his great worth gave him a weight in the House of Burgesses which few ever attained.”4 Speaker Randolph became a central figure in Virginia politics in the years prior to the outbreak of the War for Independence.

The Townshend Acts of 1767 further fueled American resistance. On May 17, 1769, Virginia’s new governor, Lord Botetourt, dissolved the House of Burgesses as punishment for the body’s opposition to the Townshend Acts. In response, Randolph and other members of the House walked to the nearby Raleigh Tavern and formed an “Association.” Randolph was the head of Virginia’s initial resistance to Parliament’s actions and helped formulate the American non-importation agreement to boycott English goods with other state legislatures.

As the “Association” developed under Randolph’s leadership, the people of Virginia formed the First and Second Virginia Conventions, effectively shadow governments, of which Randolph was president. The Conventions issued statements in support of Boston following the Boston Tea Party (1773) and against Virginia Governor Lord Dunmore (April 21, 1775) for removing the gunpowder from the Williamsburg storehouse.5

When the First Continental Congress formed on September 5, 1774, Randolph, George Washington, Benjamin Harrison, Edmund Pendleton, Richard Henry Lee, Patrick Henry and Richard Bland attended as Virginia’s delegates. Early in the session, Thomas Lynch of South Carolina nominated Randolph for President, and he won unanimously. Lynch proposed the nomination by stating Randolph was “a Gentleman present who had presided with great Dignity over a very respectable Society, greatly to the Advantage of America.”6

In March 1775, during a meeting of the Second Virginia Convention at St. John’s Episcopal Church in Richmond, Patrick Henry gave his famous speech closing with “Give me liberty or give me death.” Randolph not only presided over this meeting but is probably one of the men in the popular lithograph at left. The Second Continental Congress was formed on May 10, 1775, and Randolph was again nominated and elected to sit as president. But, in June 1775 Governor Dunmore called the House of Burgesses back into session in Williamsburg. As the Speaker of that body, Randolph resigned his seat in Congress, and his cousin, Thomas Jefferson, filled it. John Hancock succeeded Randolph as President of the Continental Congress.

Between July 1775 and Randolph’s death that October, he maintained a strong presence in American political life—engaging in congressional debates and attending to political matters. Randolph participated in the Third Virginia Convention and reported to now General George Washington that Virginia had proposed to raise an “Army” of 1,000 men.7 Randolph also visited Philadelphia and the Congress. John Adams wrote that Randolph sat in session on September 19. Although Adams anticipated some tension between Randolph and Hancock, he was pleased to report that Randolph “Sits very humbly in his Seat, while our new [President] continues in the Chair, without Seeming to feel the Impropriety.”8

While visiting Philadelphia, Randolph suffered a stroke and died on October 22, 1775. His legacy, as the first President of the Continental Congress and a powerful leader in the House of Burgesses, places Randolph among the most prominent leaders of the revolutionary generation. Mercy Otis Warren described Randolph as “the unshaken patriot.” Richard Henry Lee, noting Randolph’s death, wrote, “Thus has American liberty lost a powerful Advocate, and human nature a sincere friend.”9 Congress appointed a committee to organize Randolph’s funeral and the whole body of Congress attended the ceremony on Tuesday October 24, 1775. His body was taken to Williamsburg and interred at the chapel at the College of William and Mary.