On 20 May 1778, British forces surrounded Continental Army troops under the command of the Marquis de Lafayette just outside of British-occupied Philadelphia. The French general’s troops occupied a command post at Barren Hill, Pennsylvania, on the northwest side of Philadelphia, now called Lafayette Hill.1 With the British in control of the de facto American capital, George Washington’s Continental Army advanced slowly towards the city in an attempt to apply pressure on the occupying force. Their maneuvers resulted in the Battle of Barren Hill.2 In actuality, the Battle of Barren Hill was more of a retreat than a battle. This engagement prevented British forces from securing critical communication and supply routes into Philadelphia.3 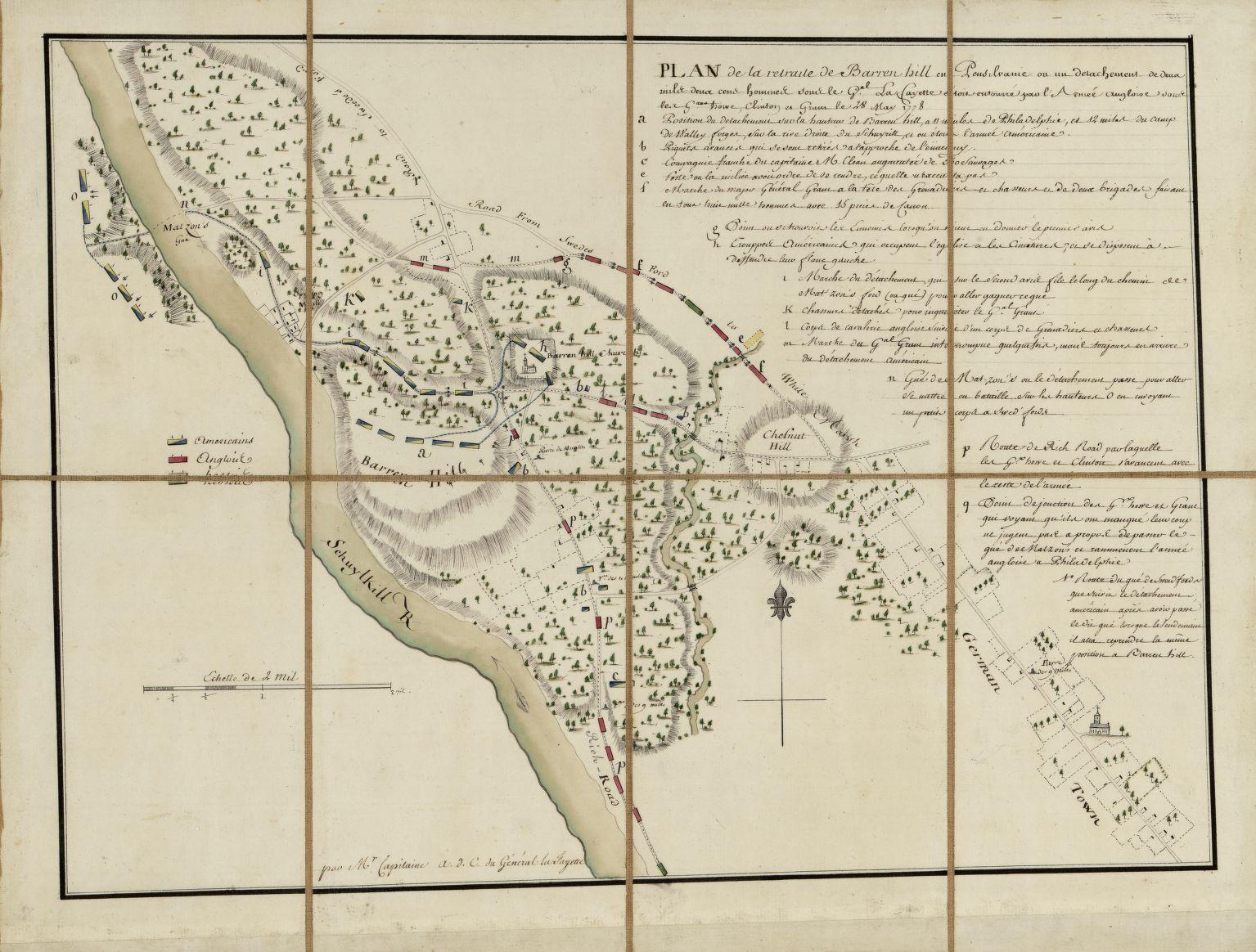 The British took Philadelphia in September 1777. It was a low moment in the American war effort. Washington faced the choice of protecting the city or ensuring his army’s survival. He chose the latter as his army’s destruction likely would have ended Americans’ quest for independence.4 Philadelphia held militaristic and symbolic importance for the rebels. It was the capital of the nascent United States. The city gave the British a base from which they could strike against the American army and control communications and supply routes in the mid-Atlantic region. By May 1778, however, the British had a tenuous hold on the city. Philadelphia’s inhabitants had not rallied to the king’s cause as the British had hoped. American forces speculated that a British withdrawal from the city was imminent.5 Indeed, the British did evacuate Philadelphia beginning in mid-June 1778.6

Two days prior to the attempted attack at Barren Hill, Washington instructed Lafayette and his detachment to provide security for the Valley Forge encampment, interrupt communication between the British and Philadelphia, obstruct enemy movements, and gather intelligence between the Delaware and Schuylkill rivers.7 Additionally, Washington advised Lafayette against taking a stationary position, reiterating the strategic necessity of Lafayette’s detachment.8  Lafayette ignored Washington and stationed his command at Barren Hill.

In his plan to encircle Lafayette, British General William Howe suspected that the rest of the American forces at Valley Forge would come to the aid of the corps at Barren Hill, thus increasing the number of troops involved and the significance of the battle. The British forces hoped a large engagement would enable the British to gain the higher ground and control three major roads to Philadelphia.9  Strategically, these locations were important to the Continental Army.10 However, Washington received intelligence about British intentions, enabling Lafayette and his troops to escape.11

Howe learned from intelligence sources that Lafayette left Valley Forge with about three thousand soldiers and eight artillery pieces, intending to cross the Schuylkill River.12 On May 19, British General James Grant received orders to come up in the rear of Lafayette’s position. British forces under General Sir Henry Clinton, coming from Philadelphia, attempted to surprise Lafayette in this pincer movement.13  In the early morning of May 20, over six thousand British troops arrived at Barren Hill, where they found no soldiers. Lafayette’s detachment had escaped across the Schuylkill River at Matson Ford.14 The attempted encirclement evidently failed to ensnare Lafayette completely. The British left a large gap unprotected, through which Lafayette escaped.

Additionally, Grant’s forces moved slowly. Several Oneida Indians help slow the British down further by ambushing them. This added to the British confusion that enabled Lafayette’s escape. French officer A. Louis de Tousard praised the Oneida warriors for their assistance to the rebels in this engagement.

Lafayette’s maneuver caused the British to retire to Philadelphia empty handed.15 Exact causalities are unknown, but certainly minimal.16 Some soldiers supposedly drowned in the amphibious retreat. Washington himself referred to the situation as “the brilliant retreat by which [Lafayette] eluded a combined Manoeuvre of the whole British force.”17 Henry Laurens noted, “the Marquis’s retreat has done him more honor than he would have gained by a drawn battle or light Victory.”18

The Battle of Barren Hill is remarkable for its relative inaction. Washington recognized the importance of Lafayette’s detachment, reminding him that his “detachment is a very valuable one, and that any accident happening to it would be a severe blow to this army.”19 Without Lafayette’s escape, the British army could have secured critical points in the region, including the three major roads to Philadelphia.20 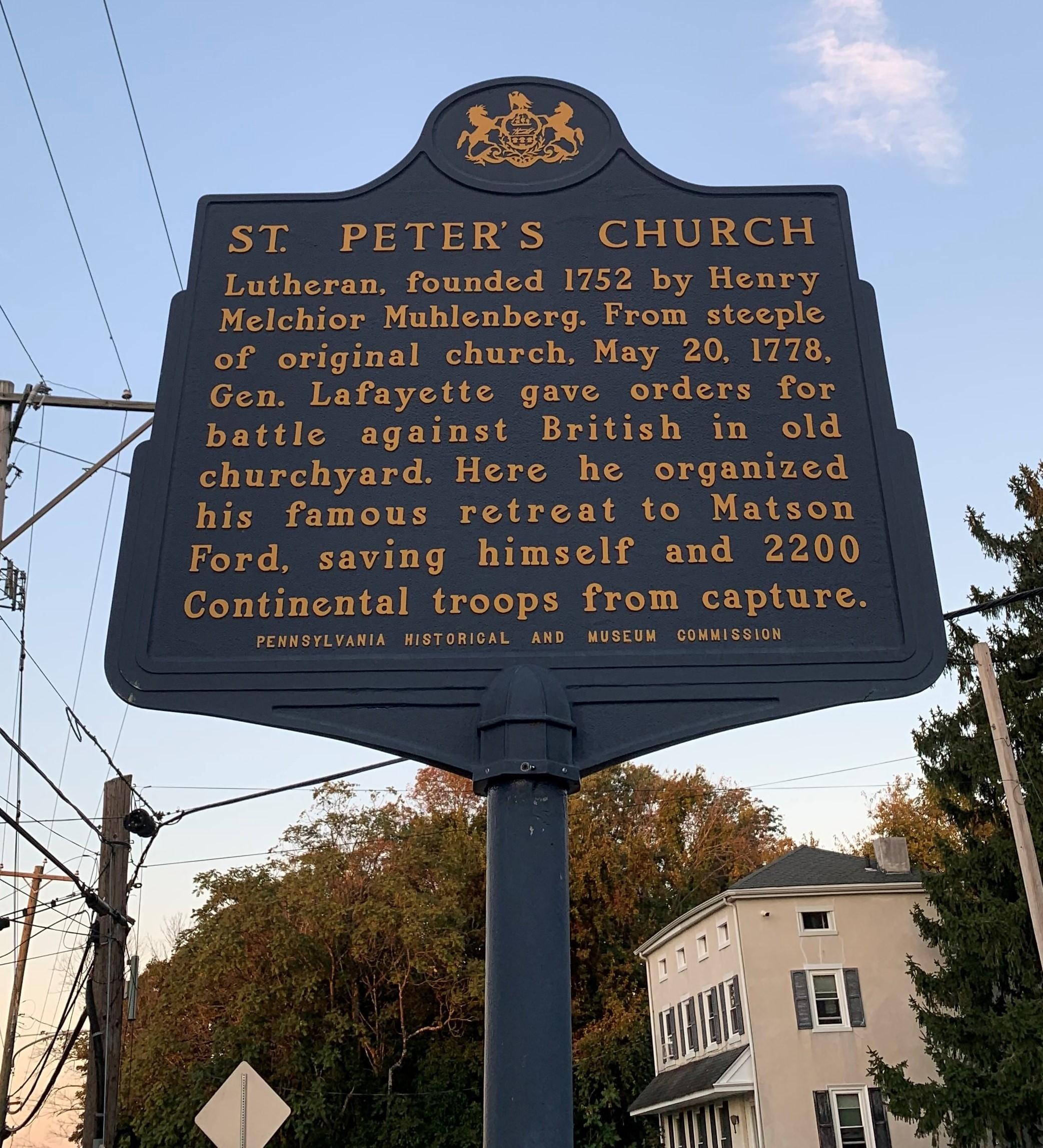 Today, a marker created by the Pennsylvania Historical and Museum Commission stands outside Saint Peter’s Church, on what was Barren Hill, stating that Lafayette organized his retreat from within the Church’s steeple. While other sources lack any mention of this activity from the Church steeple, the sign does highlight the significance of the Battle of Barren Hill, that Lafayette’s retreat saved critical troops from combat and capture.