Where is it Located

About the Washington Tomb

The New Tomb, first opened in 1831, is the final resting place of George and Martha Washington. George Washington left specific instructions for his burial. Because the family vault at Mount Vernon was deteriorating and not “properly situated,” he wanted a new one built—of brick and on a larger scale—adjacent to his fruit garden and nursery. In the new vault, he wrote in his will, “my remains, with those of my deceased relatives (now in the old Vault) and such others of my family as may chuse to be entombed there, may be deposited.”

Washington’s wishes were not immediately heeded. Just after his death, Congress resolved that a marble monument to him should be erected in the new US Capitol building and that the first president’s remains should be interred there. Martha Washington’s consent was sought and obtained, and a crypt was provided under the Capitol dome. But the project was never completed. In 1831 Washington’s surviving executors moved his and Martha’s bodies and those of other members of the family from the old vault to the present enclosure.

The marble sarcophagus in which Washington’s remains now rest was carved in 1837 by John Struthers of Philadelphia. At that time, the leaden inner casket was removed from the closed vault and entombed within the marble. A similar sarcophagus, more plainly sculpted, was provided for Martha’s remains.

The marble obelisks in front of the tomb were erected in memory of the president’s nephew Bushrod Washington and great-nephew John Augustine Washington II, and his great-great nephew John Augustine Washington III, who, in turn, were proprietors of Mount Vernon. Their remains rest in the inner vault along with those of 23 other family members. The memorials on the side of the enclosure mark the graves of Washington’s step-granddaughter Eleanor (Nelly) Parke Custis Lewis, her youngest daughter, Mary Eliza Angela Lewis Conrad, and Mary Eliza’s infant daughter, Angela. 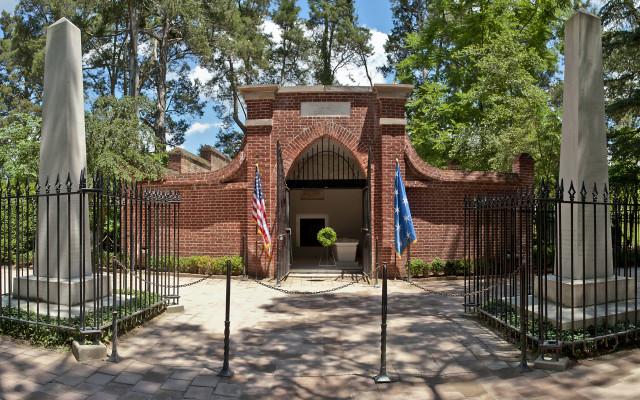 Tribute at the Tomb