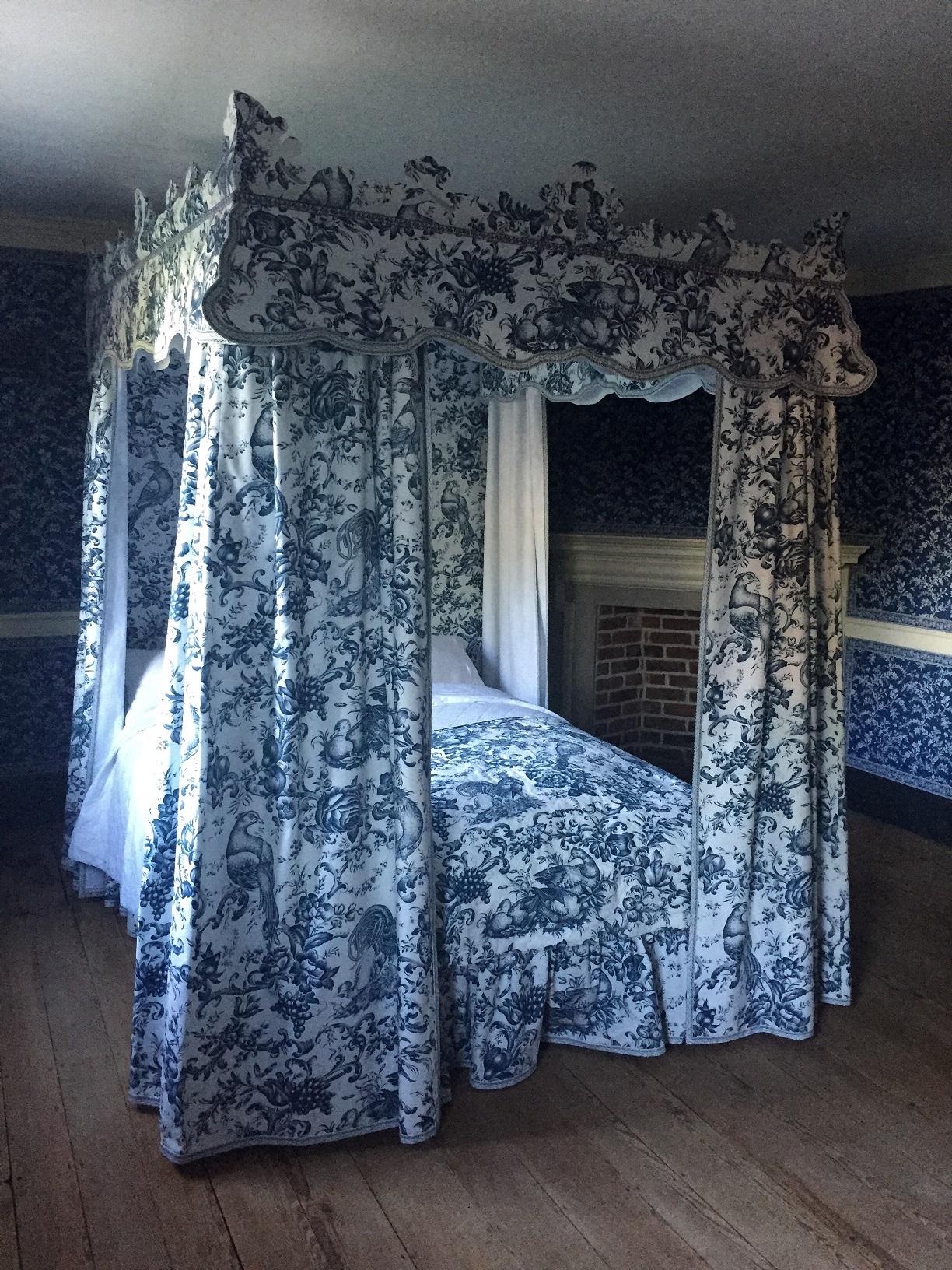 While the Blue Room was never the most important room inside George Washington's home, it still played an important role in the daily operations of Mount Vernon's busy household.

The footprint of the room was largely realized after George Washington’s first major building campaign, which began in 1758 and likely continued into the 1760s.

Today, after extensive restoration and research conducted by Mount Vernon's Historic Preservation & Collections team, this space has been given new life and the chance to tell a rich story about the evolution of the Mansion and George Washington himself. 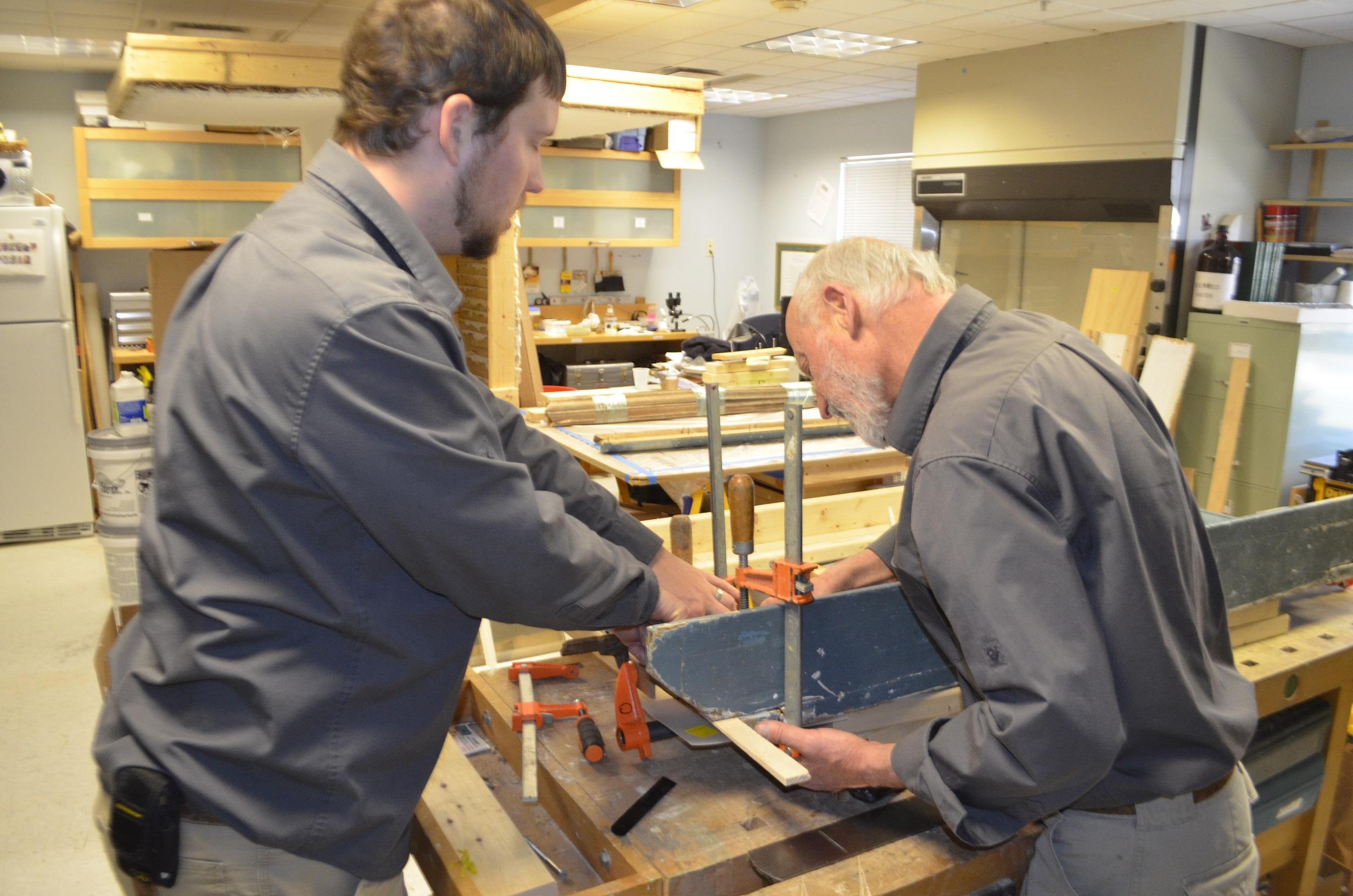 "With respect to the chimney, I would not have you, for the sake of a little work, spoil the look of the fireplaces, tho’ that in the parlor must, I should think, stand as it does.... The chimney in the room above ought, if it could be so contrived, to be an angle chimney as the others are: but I would not have this attempted at the expence of pulling down the partition."

One key discovery was the identification of the room’s 18th-century mantel. This mantel had been removed and placed in storage in the 1980s. After more recent examination of the mantel’s construction and fastener (nail) types and locations, and its resemblance to a plate in an 18th-century architectural pattern book (known to have been a source for other features in the Mansion), it was clear that the mantel dated to the 18th century.

Paint analysis confirmed that the mantel belonged to the Blue Room, as its paint stratigraphy was consistent with the paint layers on the rest of the room’s woodwork. Further, the paint analysis showed that the mantel was added to the room later than the rest of the woodwork, consistent with documentary evidence referring to a new “angle chimney” being added in 1776.

The combination of paint analysis and documentary research allowed the team to put a concrete date on the 1776 paint layer and, in turn, helped to determine relative dates for the subsequent layers, all of which were cream. The mantel was thus repaired and reinstalled in the room before being repainted.

"In the month of November, I had the honor to receive your letter, and a few days since, that of the first Vol: of your Essays, Political Economical and Philosophical. For these marks of your polite attention to me, I pray you to accept my best thanks…"

Another unexpected discovery occurred upon close examination of the firebox: an angled outline was visible in its floor. The shape suggested that the 1776 firebox had been altered by the building of a Rumford insert – an angled brick wall built in front of the existing back and sides of a fireplace to reduce its size and narrow the chimney throat in order to improve fuel efficiency and heat levels and reduce smoking. Additional research determined that Washington had corresponded directly with Count Rumford, the inventor of the

Additional research determined that Washington had corresponded directly with Count Rumford, the inventor of the insert, and that Washington owned and had received an advance copy of Rumford’s 1796 essay on “chimney fire-places.” Other founding fathers such as John Adams, Thomas Jefferson, and Alexander Hamilton also voiced an active interest in Rumford’s technology. Jefferson made drawings of Rumford inserts for Monticello and confirmed in writing that he had installed inserts prior to 1799.

Washington was not as explicit, but in 1798, there were references in Mount Vernon’s Farm Reports to work being done on the Mansion House chimneys. Furthermore, mortar samples taken during the 2017 restoration project that identified the make-up of the mortar, as well as examination of mortar impressions in the firebox floor that showed the locations of bricks relative to the early mortar, supported the suspicion that the insert was added during Washington’s lifetime. Thus, the Rumford insert was rebuilt within the Blue Room firebox.

"In my last I wrote the outside of the House being finish’d, the Closets excepted, & that by reason of not having flooring plank, which Mr Balendine has got a Bill of."

While not now visible to visitors, there was once a door in the room’s north wall, indicated by the presence of doorposts and door-jamb liners with door stops. This door was closed-in when the New Room was added in 1776; before then, it would have served as a means of access to the roof of one of the one-story closets below.

The physical evidence for early doors in both the Blue and Chintz Rooms provides some of the strongest corroboration of the “closets” mentioned in documents from Washington’s 1758 building campaign.

The vivid blue wallpaper in the room is a custom reproduction licensed by Les Arts Décoratifs, Paris, from the historic pattern books of the royal French wallpaper manufactory started by Jean-Baptiste Réveillon and continued, after the establishment of the French republic, as Jacquemart et Bénard. Adelphi Paperhangings, Inc. produced the wallpaper using hand-ground pigments. The harmonious pattern (simply called Fleurettes, oiseaux, insectes or Flowers, birds, insects) dates to the 1790s, with graceful arcs of flowers accented by tiny, whimsical birds and insects, a timeless theme that complements the bold printed cotton.

Several important data points guided the selection of this pattern. In 1797, after eight years away, the Washingtons made substantial updates, including wallpapering throughout the house. The Philadelphia suppliers Washington purchased from, William Poyntell and Georges Bertault, specialized in highly fashionable French papers, and fragments from the surviving border in the New Room have been documented as the product of the Réveillon/Jacquemart et Bénard firm. Accordingly, curators looked to the historic collections of Les Arts Décoratifs, Paris, for a c. 1790s, blue-ground paper.

Paint analysis conducted by conservator and paint analyst Susan Buck, using the latest advancements in cross-section microscopy and pigment analysis techniques, revealed far more detail about the wall finish history of this space than previous paint analysis. While the woodwork had been painted a light blue early on, by 1776, it had been changed to a light cream color, and it continued to be repainted in similar tones through the end of the century. As in the Chintz Room, the change to a neutral color was indicative of the Washingtons’ desire to keep up with fashionable taste, and strongly suggested that the Washingtons continued to update the room with wallpaper as well.

Discover the Mansion's Other Rooms