The 1800 inventory taken after George Washington’s death names four prints that hung in the Blue Room. 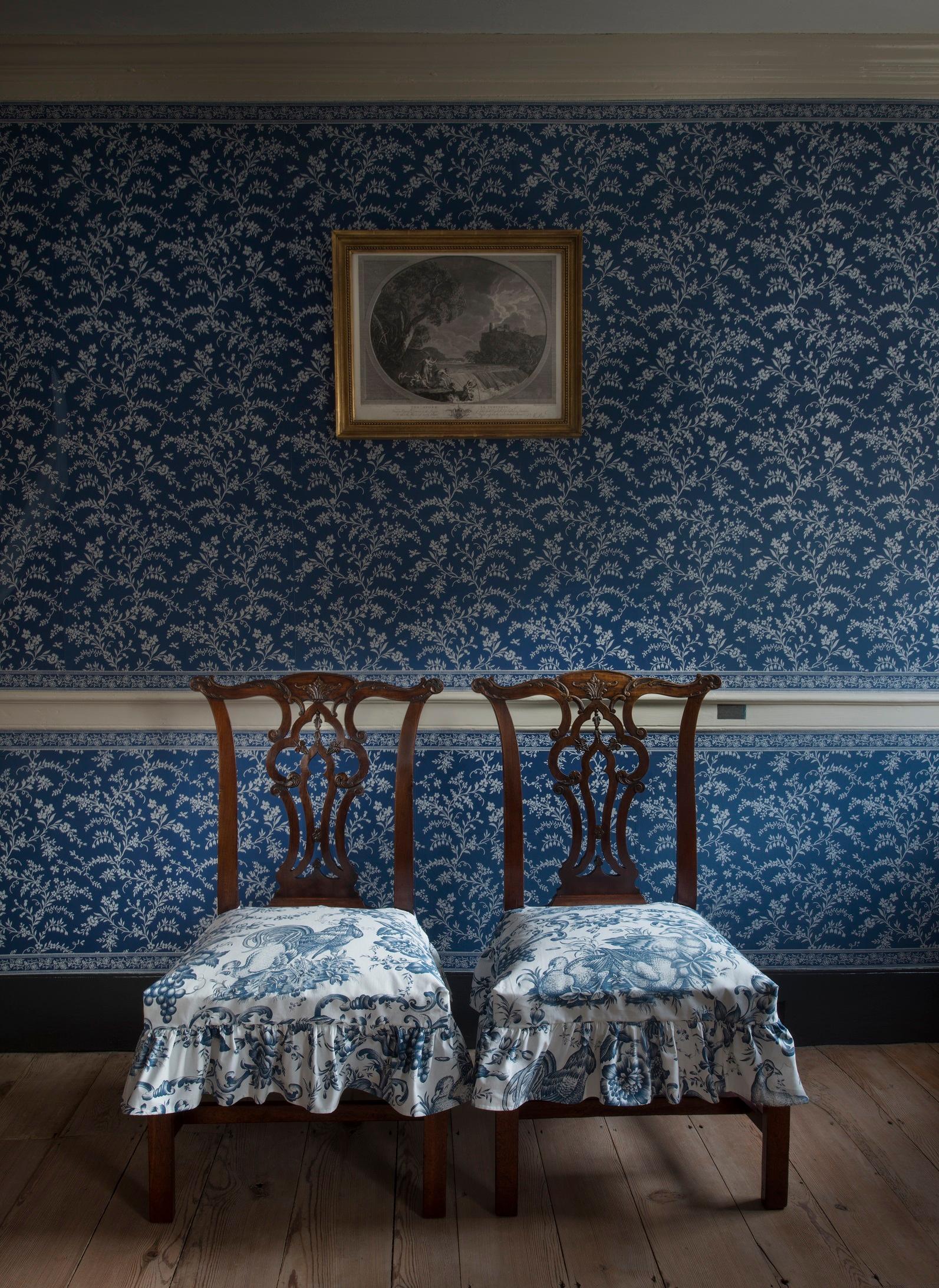 While none of the originals owned by Washington have been conclusively identified, the curators located period examples and reproduced these for display in the room. In 1797, the introduction of four gilt-framed fine art prints to the Blue Room made it more than just a room with a view by virtually opening new vistas to far away or mythical lands.

The prints, part of a collection of over 100 that Washington had amassed in Philadelphia, announced his emergence as a collector and a man of taste. At the time, building a collection of prints, skilled reproductions of original art, was a serious pursuit. Contemporary theorists linked the ability to choose and enjoy artwork to the development of one’s moral virtue. Displaying art in good taste testified both to one’s own character and a noble desire to elevate the visiting viewer.

For the Blue Room, Washington chose works that showcased the contemporary artists of the day. The product of innovative techniques and collaborations between artists, engravers, and publishers, these prints offered guests a sampling of the best of the London art world in the late eighteenth century.

The largest prints in the room, (Thomas) Gainsborough’s Forest and (Meindert) Hobima’s Village, reproduced paintings that played on a common theme favored by eighteenth-century collectors: peaceful forest landscapes sprinkled with a diverse array of busy humans. Both artists were indebted to the landscape style of the seventeenth-century Dutch master, Jacob van Ruisdael (1628/9-1682), but opted for a sunnier, lighter tone in their works.

Meindert Hobima (1638-1700) had trained under van Ruisdael. In Hobima’s Village, described as a “capital original picture” by the publisher, two hunters and their dog follow a winding road past a group of assorted cottages on the left. Behind the hunters, the long road carries the viewer into the expansive distance, enlivened by the tiny travelers that appear at each bend.

Englishman Thomas Gainsborough’s (1727-1788) first love was landscape, and throughout his career he took inspiration from the work of the Dutch masters. Gainsborough’s Forest (later known as Cornard Wood) was his most celebrated early landscape, inspired by the countryside of his native Sudbury in Suffolk, England. In the painting, a church spire and village appear in the far distance at center, while the sunlit forest itself is a lively place: a woodman binds the logs he has just felled, cattle and donkeys graze, ducks fly over an adjacent pond, a working man pauses while an attendant woman waits and entertains a dog, and a series of travelers follows the winding road to the village.

The prints of Gainsborough’s Forest and Hobima’s Village presented examples of great landscapes, but they also showcased the pleasing effects of a recently introduced printing technique. Both were created using aquatint, which employed a combination of acid and powder to etch a design on the printing plates. The king of London printsellers, John Boydell, commissioned the newly-arrived German émigré artist, Maria Catherina Prestel (1747-1794), one of the earliest practitioners of the technique, to try her hand at recreating the scenes. By using aquatint and etching, Prestel captured the details of the original oil paintings, but with a lighter, watercolor effect.

Joining the two imposing landscapes in the Blue Room were two smaller prints, Nymphs Bathing and Storm. Washington described both as being “in colours,” suggesting they were in fact printed in colors. While not a new technique, color prints remained a novelty in the period. To create one, a single printing plate had to be carefully inked with multiple colors in distinct locations. A rare color-printed example of Nymphs Bathing, with a Washington family history, appears to use at least four different pigments in shades of peach, green, blue, and brown.

Both prints were also the work of multiple hands. The figure groups in each were copied from designs by Giovanni Battista Cipriani (1727-1785), a leading practitioner of the neoclassical style in England who was considered a master of figure drawing. Cipriani enjoyed the patronage of King George III, and his prolific work ranged from monumental ceiling decorations and stage sets to drawings and designs for medallions, furniture, and prints. The Irish artist John James Barralet (1747-1815) drew the landscape backgrounds. Barralet’s varied career would ultimately take him to the United States, where he produced his most famous work, The Apotheosis of George Washington.

It took an additional two artists to actually produce the prints. Francesco Bartolozzi (1727-1815), a close friend and collaborator of Cipriani, engraved the figures in exquisite detail, while the Frenchman Victor Marie Picot (1744-1802) executed the landscapes and shaded surrounds in bolder lines.

Storm presented a harrowing moment, intended to rouse a strong emotional response: lightning cuts across the sky above a castle, while below, men struggle to rescue voyagers in a boat about to be carried away by a rushing waterfall, a woman invokes divine intervention, and children cling to their mothers. The serene companion piece, Nymphs Bathing, offered a calmer scene for contemplation. In it, a group of beautiful nymphs, the immortal spirits of waterways and woods, enjoy a refreshing dip in a gentle stream, quite a contrast to the raging torrent in Storm. The pairing and marketing of the two scenes was no accident, but designed to offer buyers and viewers an emotionally moving and morally stimulating study in contrasts: Nature’s fury and blessing displayed at once.

Furnishings in the Blue Room

The evidence suggests the Washingtons furnished the Blue Room extensively, but not ostentatiously.