Each year Mount Vernon welcomes over 1.1 million guests from around the world... but have you ever wondered what it was like visiting Mount Vernon over one hundred years ago? 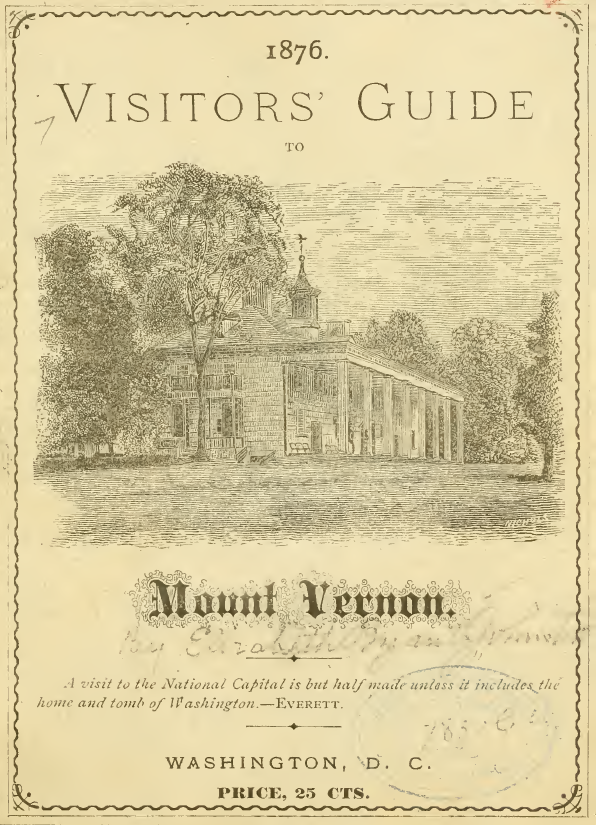 The first official Mount Vernon guidebook was published in 1876 at the request of the Mount Vernon Ladies' Association (MVLA), who purchased the property from the Washington family in 1858. While other guides of the estate did exist, the MVLA did not endorse them.

The first official guidebook was written by Miss Elizabeth Bryant Johnston, an accomplished journalist, art critic, and historian. Johnston was invited by the Vice Regents of the MVLA to stay at Mount Vernon while writing the book. For the next 22 years, Johnston created new editions and arranged the printing of the guidebook.

1. Most Visitors Arrived by Boat

Today the majority of our guests arrive via automobile and pass through the Texas Gate.  However, in the mid-to-late 1800s, the fastest way to travel to Mount Vernon was steamship.

The steamboat Arrow left from the 7th street wharf in Washington, D.C. at 10 AM and then returned around 5 PM to D.C. allowing guests several hours to explore the estate.

Travel to Mount Vernon by Boat

2. There Was Much To See Along the Journey

While onboard the Arrow there was much to see along the way.  Visitors could see the:

3. Washington's Tomb Was the First Stop for Visitors

Today most guests want to first visit the Mansion upon their arrival.  However, for guests arriving in the mid-to-late 1800s, Washington's final resting place, the New Tomb, was their first visit.

Mount Vernon’s Superintendent at the time, James Hollingsworth, greeted guests and escorted them to the Washington Tomb to pay respect to the commander-in-chief and first president of the United States of America.

Learn More About the Tombs

In the early years, the security of Mount Vernon's prized objects was a difficult challenge for the Mount Vernon Ladies Association.  "Relic hunters", also known as "Land Pirates!" in the guidebook, often arrived on the tours looking to take home a piece of the Washington estate.

This became so much of a problem that fines were levied and noted in subsequent versions of guidebooks and the MVLA was forced to hire guards to roam the estate looking for would-be vandals.

Today we highly encourage guests to instead take a souvenir home from our gift shop to ensure that Mount Vernon will remain intact for future generations. However, the practice of maintaining an active security guard service still remains today.

5. The Rooms in the Mansion Had Different Names

When the MVLA purchased Mount Vernon from the Washington family it was unfurnished.  The Vice Regents who made up the MVLA each represented an individual state. Each was tasked with furnishing the rooms in the Mansion.  As a result, the early names for these rooms were based on the state that the Vice Regent responsible for furnishing that room was from.

Today, Mount Vernon’s experts investigate and install furnishings in the Mansion and room names are based on what the Washingtons' called each space.

6. A Tradition of Hospitality

Today's guests might take a photograph on their cell phone, dine at the Mount Vernon Inn Restaurant, or take home a souvenir from the Shops at Mount Vernon. However, in the late 1800s, all of this activity took place right outside George and Martha Washington's kitchen.

Guests could purchase "views of Mount Vernon" early photographs and engravings officially licensed by Mount Vernon photographers and artist.  Guests who had arrived on the boat would all pose as a group and photographs would be available to purchase and pick-up later in D.C.

In addition to souvenirs, visitors would gather by the well house just outside the kitchen where they could purchase refreshments and even drink water from the well.  The well house, while not original to the property during Washington's time can still be seen by guests today as part of the Agent 711 Spy Adventure game.

As a way to raise funds for the MVLA and the restoration of the Mount Vernon estate tea roses, named "Mary Washington", were raised and sold to visitors.  The association sold nearly three hundred per year.

The story was told that the rose was grown from "a seedling raised by General Washington and named for his mother".

Flowers were sold in the newly reconstructed Greenhouse that was destroyed by fire in 1835.

Learn About the Gardens

Ever a diligent fundraiser, the Mount Vernon Ladies Association was very transparent to guests and letting them know that the restoration and upkeep of the estate would not be possible without the support of the public.

Today the MVLA still relies on patriotic Americans to support our ongoing mission of preservation and education and proudly remains in private hands and has never accepted government funding.

Today our guests can find this information in Mount Vernon's annual report.

9. Steamers on the Potomac would Toll their Bells in Tribute

An old maritime tradition on the Potomac River was that any steamer passing by Mount Vernon rang its bell in honor of Washington.  This tradition was still in practice during the late 19th century.

It's a tradition that actually helped to save Mount Vernon from ruin.  In 1853, Louise Byrd Cunningham of South Carolina was traveling by steamship down the Potomac River.   The captain rang the ships bell encouraging guests to have a look at the estate.

Louisa Byrd was so appalled by the condition of the Mansion that she wrote to her daughter, Ann Pamela Cunningham while on the journey and described the sad state.

Upon receiving the letter, Ann Pamela authored a letter in a local newspaper as "The Southern Matron" writing:

Why was it that the women of his country did not try to keep it in repair, if the men could not do it?

With this statement, the Mount Vernon Ladies Association was formed in 1853 and raised $200,000 to purchase the estate from the Washington family and another $100,000 to restore and maintain its condition.

Explore the Founding of the MVLA

The very first guidebook offered advertisements for two Washington, D.C. businesses: the Colonnade House and The Ebbit House.  The Ebbit House is still in operation today as the Old Ebbitt Grill.

In addition, the book also lists several other points of interest in Washington, D.C. including:

See what visiting Mount Vernon was like in 1876 through the very first guidebook.

Continue in the footsteps of those before you. Visit the home of the Washingtons. We look forward to welcoming you!