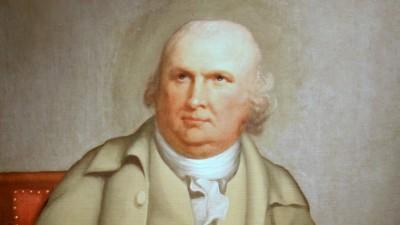 Robert Morris was a financier of the American Revolution, delegate to the Second Continental Congress, signer of the Declaration of Independence, and senator from Pennsylvania. Given Morris’s personal…

Alexander Dallas was a Pennsylvania lawyer, financier, and politician who served as President James Madison’s secretary of the treasury.

Held September 11-14, 1786, the Annapolis Convention was a meeting incipiently aimed at constructing uniform parameters to regulate trade between states during a time of political turbulence and economic strain.

Founded by Benjamin Franklin Bache, the Aurora General Advertiser was published in Philadelphia between 1794 and 1824. Bache, the grandson of Benjamin Franklin, established the Aurora as a Republican newspaper that could counter the many Federalist newspapers in circulation at the end of the eighteenth century. It quickly became the leading Republican paper in the United States. Bache ran the Aurora six days a week from a two-story print shop located a few blocks away from Independence Hall using presses and printing fonts that he had inherited from his grandfather. Despite having a large readership, the Aurora was never a particularly lucrative business for Bache or its subsequent editors.

Circular Letter to the States

Having received news of the signing of a preliminary peace treaty on April 11, 1783 Congress proclaimed?

Thirteen centuries after the Roman Empire fell in 476 A.D., the compendium of Roman classics served as an ideological guidebook for the American founders. Classical Roman concepts and figures exerted a formative influence on the founders’ governmental theories and principles of virtue.

The Constitutional Convention met in Philadelphia, Pennsylvania from May 14 to September 17. Delegates gathered to correct the various problems that had arisen while the newly-independent nation was operating under the Articles of Confederation following independence from Great Britain. The historic result of the Convention was the crafting of the United States Constitution.

When General George Washington approached his revolutionary headquarters at the John Vassall estate in Cambridge, Massachusetts, for the first time in July 1775, he encountered a young African American boy swinging on the front gate. That boy, six-year-old Darby Vassall, had just returned to his original home after his second master had died at the Battle of Bunker Hill.

President George Washington faced a number of difficult challenges during his two terms in office. Washington despised partisanship and voiced his concerns regarding political disunity throughout his presidency. One important example of Washington’s distaste for partisanship was his public denunciation of popular political societies. The founding of a network of over forty Democratic-Republican Societies throughout the young nation between 1793 and 1796 triggered fears of disorder amongst Federalist elites. These political associations were known by various names but most often included "republican" or "democratic" in their titles. Members of these societies expressed strong support for the French Revolution and fellowship with democratic radicals throughout the Atlantic world. Most members were from the laboring classes and included many who were traditionally denied a political voice. Accusations that political clubs in western Pennsylvania contributed to the Whiskey Rebellion in 1794, coupled with Washington's vocal criticisms, contributed to the rapid decline of the groups by the end of the decade. Nevertheless, the societies informed the party system that would emerge in the nineteenth century.

First in War, First in Peace, and First in the Hearts of His Countrymen

"First in war, first in peace, and first in the hearts of his countrymen." These famous words about George Washington come from a eulogy written by Henry “Light Horse Harry” Lee.

The 1790 census was the first federally sponsored count of the American people. One of the most significant undertakings of George Washington's first term as president, the census fulfilled a constitutional mandate and was interpreted by many as evidence of national prosperity and progress.

George Washington served in the Virginia House of Burgesses for fifteen years before the American Revolution?

In December of 1783, General George Washington resigned his commission as Commander-in-Chief of the Continental?

Near the beginning of his first term as President, George Washington declared that a just Native American policy was one of his highest priorities.

The Pacificus/Helvidius Letters were a series of newspaper articles published in the Gazette of the United States in response to President George Washington’s “Neutrality Proclamation.” The letters reflected opposite positions on the role of the executive and legislature in American foreign policy.

William Cobbett (1763-1835), alias Peter Porcupine, engaged in a war of words, fueled by pro-British, anti-French, partisan messages to voters – and pummeled pro-French euphoria in competitive papers – via his own Federalist newspaper, Porcupine’s Gazette. Porcupine’s Gazette was filled with ephemera across the spectra of Philadelphian life, but the Gazette assumed a heightened political importance during the XYZ Affair and Quasi-War.

IntroductionAt the time of his inauguration, George Washington was described in almost universally glorified?

The Quasi-War, which at the time was also known as The Undeclared War with France, the Pirate Wars, and?

As the president of the Constitutional Convention, George Washington rarely participated in the debates?

Robert Dinwiddie poured his ambitions into becoming a successful merchant, as well as a colonial administrator and politician for more than 30 years, including six and a half years as Governor of the Royal Colony of Virginia (1751-1758)

Robert Morris was a financier of the American Revolution, delegate to the Second Continental Congress, signer of the Declaration of Independence, and senator from Pennsylvania. Given Morris’s personal wealth and financial acumen, Congress appointed him superintendent of finance in 1781, which gave him sole authority over financing and supporting the Continental Army during the Revolutionary War.

Samuel Powel was an elite Philadelphia politician who was close friends with George and Martha Washington.

The Articles of Confederation

The Articles of Confederation were the first national frame of government for the United States.

A Federalist politician, Timothy Pickering was appointed to several federal positions by President George Washington, most notably Postmaster General, Secretary of War, and Secretary of State. He later served in the Senate and in the House of Representatives.

The life of William Grayson, an honored statesman, lawyer, and soldier, is tied closely to both the birth of the United States and the ascension of George Washington to the nation?s highest office.

For a decade, from 1748 until 1758, George Washington spent more nights in Winchester than any other place.

Between the onset of the French Revolution in 1789 and the final defeat of Napoleon Bonaparte at Waterloo?