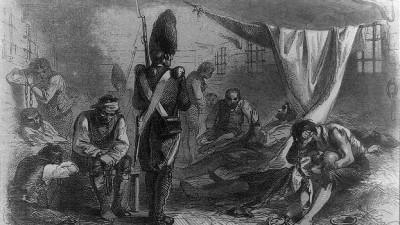 Prisoners of War (POWs) are combatants captured and held by the enemy during periods of open conflict. During the American Revolution, thousands of soldiers, militiamen, and civilians were taken prisoner…

Andrew Lewis served as one of George Washington’s principal officers in the Virginia Regiment during the French and Indian War.

Following the British failure to capture Fort Duquesne in 1754, British authorities assigned General Edward Braddock the task of venturing to the Forks of the Ohio and removing the French presence from the region. His forces were ambushed and nearly destroyed by the French and Native Americans near Monongahela.

Camp followers in the Continental Army served a critical role in the day-to-day functions of the American revolutionary cause. By the winter of 1777, around two thousand women marched with American troops and worked as seamstresses, nurses, and cooks. In many cases, women who followed the army were widows, runaway servants, or those who faced poverty because of the war. The wives of high-ranking officers, including Martha Washington, also accompanied their husbands at winter encampments. Though they supported the operations of the military, camp followers were often disparaged for taking a share of the already meager resources of the Continental Army.

Unlike most of the generals who held command under General Washington, Clement Biddle was not what would have been, by the standards of the day, an educated man.

During the French and Indian War, George Washington became embroiled in several different arguments over?

Daniel Morgan, a brigadier general in the American Revolutionary War, was one of the Continental Army’s most valuable tacticians and commander of several of the most successful rifle corps of the war.

Deborah Sampson is best known for disguising herself as a man to serve in the Continental Army from May 1782 to October 1783. She was also one of the first women to receive a pension for her military service and the first woman to go on a national lecture tour of the United States.

General Edward Braddock commanded British forces in the unsuccessful 1755 campaign to expel the French from the Ohio Valley near Pittsburgh, Pennsylvania.

Spy tactics are crucial to gaining military advantages over enemy troops. While serving in the French and Indian War, George Washington experimented with organizing groups of spies and discovered the importance of codes and ciphers for wartime correspondence. During the Revolutionary War, Washington centralized intelligence operations, created spy rings, emphasized use of codes and invisible ink, and employed various other espionage tactics.

The Forbes Expedition of 1758 was the third attempt by Virginia Colonel George Washington to capture?

Constructed by the French in 1754 at the heart of the Ohio River Valley, Fort Duquesne was an important landmark during the Seven Years’ War (1756-1763).  Because of its strategic location on the land where the Allegheny and Monongahela Rivers meet to form the Ohio River, the British made several attempts to take the fort from the French and gain control of the Ohio Country.  In 1758, an expedition led by General John Forbes finally succeeded in capturing Fort Duquesne, and Fort Pitt was established by the British on the site.

The story of Frederick’s youth is a known chronicle of suffering.”

The French and Indian War (1754-1763) is the name given to the North American theatre of the Seven Years’ War (1756-1763), a global conflict involving the major powers of Europe. Though war was not formally declared until 1756, armed conflict began in 1754 as disputes over land claims in the Ohio Valley lead to a series of frontier battles between the French and British. Both received support from various Native American tribes, though the outnumbered French became far more dependent on these allies as the war progressed. The French saw a number of early victories, most notably over George Washington and Edward Braddock in Western Pennsylvania. Washington quickly became a central figure in the conflict, maturing during his tenure in the Virginia militia from an inexperienced young major to the commander in chief of the colony’s regiment. Washington’s involvement during the war’s early stages provided the future President with invaluable military experience while also gaining him positive notoriety that helped to launch his future political career. The tide turned in favor of the British in 1757 when King George II appointed Secretary of State William Pitt to commander of wartime operations.  Pitt believed that securing victories in North America would ensure Britain’s global success, and reinvigorated the war effort by reorganizing military leadership and strengthening the Crown’s relationship with its colonists in America. British assaults on strategic outposts such as Ticonderoga, Niagara, and Quebec in 1759, followed by the successful siege of Montreal in September of 1760, prompted the French surrender. Though Britain’s victory in the French and Indian War expelled France from North America and secured massive territorial gains for the empire, subsequent Crown policies concerning taxation and westward expansion resulted in widespread colonial discontent. The conflict and its aftermath produced substantial ideological divisions between Britain and her North American colonies that ultimately contributed to the outbreak of the American Revolution.

For George Washington, the greatest failure of his military career was the loss of New York to the British?

On May 28, 1754 Virginia Regiment Lieutenant Colonel George Washington and Mingo chief Tanacharison led a party of roughly forty men in a raid against twenty-nine French soldiers in present-day western Pennsylvania killing ten and capturing twenty-one. The attack represented to opening salvoes of the French and Indian War.

On March 11, 1776, from his headquarters in Cambridge, Massachusetts, overseeing the siege of Boston?

The phrase military discipline in the eighteenth century referred to all aspects of training in the army?

Pontiac’s Rebellion (1763-1765) was an armed conflict between the British Empire and Algonquian, Iroquoian, Muskogean, and Siouan-speaking Native Americans following the Seven Years’ War. Also known as “Pontiac’s War” or “Pontiac’s Uprising,” the violence represented an unprecedented pan-Indian resistance to European colonization in North America, in which Indigenous nations – Ottawa, Delaware, Potawatomie, Shawnee, Mingo (Seneca), Wyandot, Ojibwe, Huron, Choctaw, Piankashaw, Kickapoo, Tunica, Peoria, and Mascouten – challenged the attempts by the British Empire to impose its will and abrogate Native sovereignty. Although the war originated in the Great Lakes and Ohio River Valley, the violence spread as fast west to the Illinois Country and as far east to western Virginia. Even though the conflict ended in a stalemate after two years of intense fighting, the British Empire was forced to reconsider its policy toward Native Americans, ultimately recognizing Indigenous autonomy. However, the American colonists resented the empire’s change of heart, given that such conciliatory measures ran counter to their anxieties and hostility toward Native Americans, which contributed to the growing disillusionment that culminated in revolution.

Prisoners of War (POWs) are combatants captured and held by the enemy during periods of open conflict. During the American Revolution, thousands of soldiers, militiamen, and civilians were taken prisoner and their presence strained the resources of the British and Continental forces alike. The situation of Patriot and Loyalist prisoners was complicated by their status as rebels and traitors, thus their treatment could be inconsistent and often quite severe. As in many early modern conflicts, the unsanitary conditions of rudimentary prison facilities caused far more deaths than actual combat.[1]

The Seven Years’ War was a conflict between France and Great Britain that began in 1754 as a dispute over North American land claims in the region around Pittsburgh, Pennsylvania. This conflict eventually spread into other parts of world, including Europe, Africa, and Asia. When the Treaty of Paris ended the war in 1763, France ceded Canada over to England and India became an English colony.1

A violent insurrection in the Massachusetts countryside during 1786 and 1787, Shays' Rebellion was brought?

The Journal of Major George Washington

The journal provides a first-hand glimpse of frontier diplomacy, the beginnings of the French and Indian War, as well as early indications of Washington's well-documented physical vigor and leadership.

An English-born merchant, explorer, militia leader, and land speculator who lived in the vicinity of?

West Point played a crucial role in keeping the new United States from falling to the British during the American Revolution, in the years before the area became known for its famed military academy. West Point is located on a plateau on the west bank of the Hudson River approximately sixty miles north of New York City. In 1781, George Washington called the fortified site “the most important Post in America,” and he worked to keep Patriot control of West Point throughout the Revolutionary War.1

In 1749, while surveying land for Lord Fairfax, George Washington met a young man remarkably like himself?