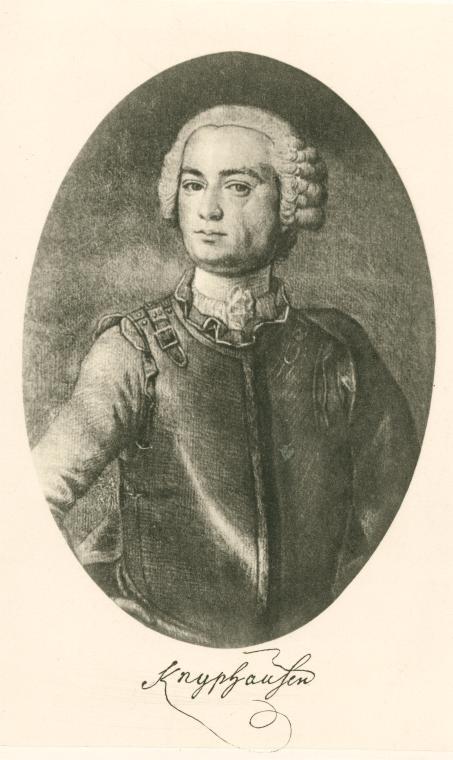 Wilhelm von Knyphausen, German landgrave and General Lieutenant, was a commander of German auxiliary troops during the American Revolutionary War. The British hired these troops, collectively known as Hessians because they predominantly came from the German state of Hesse-Cassel, as mercenaries. Knyphausen was notable for his role in the capture of Fort Washington (renamed Fort Knyphausen), and for his brief command of New York City during the British commanding general, Henry Clinton's, absence.

Knyphausen was born on November 4, 1716 in either Luxembourg1 or East Frisia2. After the death of his father (a Colonel in a German regiment under the Duke of Marlborough)3 his mother married his uncle Friedrich Ernst von Knyphausen, a member of the Prussian privy council. The family consequently relocated to Berlin, where young Knyphausen was educated. He entered the Prussian military in 1734 and steadily rose through the ranks. He was a major by the time he was injured in the 1759 Battle of Bergen during the Seven Years’ War. The following year he became a lieutenant-colonel in the infantry regiment of Gilsa. In 1775, he was promoted to Lieutenant General4 in the army of Frederick the Great.5

In 1776, he went to America as Second in Command under General von Heister of the “Hessian” auxiliaries, or Hilfstruppen, to help the British.6 His 6,000-soldier 2nd Division,7 specially hired for garrison duty8 left Bremen that spring and arrived on Staten Island twenty weeks later on October 18. After General von Heister’s recall back to Germany due to conflict with General William Howe,9 Knyphausen received full command of the Hessian auxiliaries in 1777.10 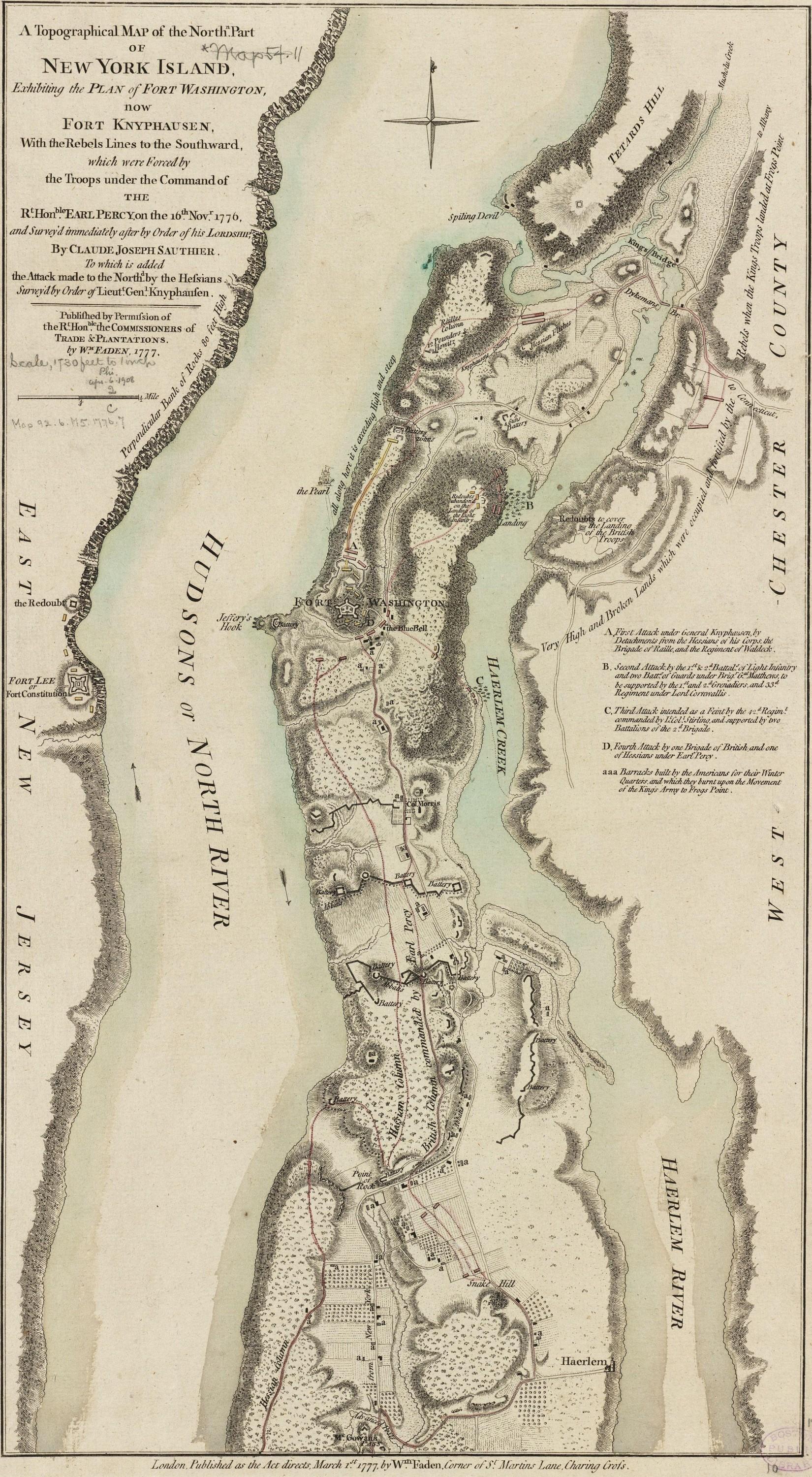 Despite being over sixty years old, Knyphausen was very active during the war. He took command of New York City during General Henry Clinton’s brief absence in 1780 for the expedition that captured Charleston, South Carolina. Knyphausen participated in the battles of White Plains (1776), Brandywine (1777), Monmouth (1778), and many more. Most notable however was the Battle of Fort Washington (Fall 1776),11 where he led the most important of the four attack forces. Exposed to as much fire as a common soldier, he removed barricades with his own hands.12 Upon the capture of Fort Washington, it was renamed Fort Knyphausen in his honor.13

He had a reputation as an aloof, but excellent, officer. On the whole, Knyphausen’s allies recognized his ability and fairness. A young Englishman wrote to his parents stating that “General Knyphausen is Com’r in chief and very much loved.”14 William John Hale, a British subaltern, remarked that Knyphausen had “by the severity of his discipline” suspended “the infamous practice of plundering, which was much encouraged by De Heister who shared in the profits of this lucrative operation.”15 But Knyphausen’s time in America was not easy. On June 2, 1778, he received news of his wife’s death.16 He also weakened and developed cataracts with age.

Knyphausen contended with the perpetual problem of desertion, including that of two ensigns who ran to the American army. “Under a flag of truce,” he reported, “I informed General Washington of the character of these two men, that they had deserted because they had contracted so many debts and had rendered themselves liable to be cashiered from their conduct”17 George Washington replied, “Altho’ it is not my business to inquire into those private motives which may induce officers to leave your service, yet I cannot but be sensible of the consideration that could give me notice of their characters.”18 Washington previously had written Knyphausen after American forces captured some Hessian and English letters. Washington returned those letters to the Hessians, along with his own “very courteous” letter, as described by a Hessian commander.19

Two years later, Knyphausen attempted to carry out a plan to capture Washington20 who, as Knyphausen reported to General Clinton, had “taken up his Quarters at a distance from his Army, under the protection of a small Corps of Infantry.” However, treacherous snow, “having rendered the Roads impassable,” derailed the mission.21

Knyphausen first requested dismissal from command in June 1778 due to one blinded eye and increasing frailty,22 but Friedrich II considered his presence critical to their cause and the morale of the troops.23 Knyphausen made the same request every subsequent year until finally allowed to retire in May 178224 with a goodly annual pension of 300 pounds sterling.25 Knyphausen became the military governor of Cassel in 1788 and died there on December 7, 1800 from complications of an eye operation.26

24. Ibid., 150. Friedrich also mentioned that whenever Knyphausen’s cataract and frailty improved, his return to command would be greatly appreciated.