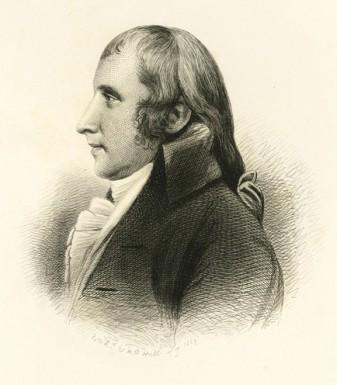 Tobias Lear served as the executive secretary to George Washington from 1786 to 1799. Lear was born in Portsmouth, New Hampshire and attended the Dummer Charity School (now known as the Governor's Academy), and then Harvard University from 1779 to 1783.

In 1786, George Washington employed Lear to manage his expense reports to Congress as well as his correspondence. Additionally, Lear was hired to tutor Martha Washington's grandchildren. Lear was integrated into the Washington household both during and after the presidency.

Lear married his childhood sweetheart Mary "Polly" Long in 1790. The couple's son Benjamin Lincoln Lear was born in their living quarters on the third floor of the presidential residence in Philadelphia the following year. Lear was dogged by debt during the frequent economic fluctuations of the Early Republic and was granted the rank of colonel as Washington's chief aide, though he never faced active duty. Mary Lear died in a 1793 Yellow Fever epidemic. Lear later established the T. Lear & Company to promote land speculation for the future site of the nation's capitol, however the venture failed.

In August of 1795, Lear married the widow of George Augustine Washington (and Martha Washington's favorite niece), Frances "Fanny" Bassett Washington, who made her home at Mount Vernon. Washington gave Lear, his bride, and her three young children a house and 360 acres of his Mount Vernon estate.

The marriage, however, was short-lived; Fanny contracted tuberculosis before the wedding and died in March of 1796. Lear despondently informed the Washingtons in a 25 March 1796 letter, "The Partner of my life is no more!" Martha Washington responded, "It is the nature of humanity to mourn for the loss of our friends; and the more we loved them, the more poignant is our grief." Lear soon rejoined the Washington household. Martha Washington's niece Francis "Fanny" Dandridge Henley became Lear's third wife in 1803.

Lear enjoyed an intimate relationship with the Washington family and his diary contained the most accurate account of Washington's death and final words. Lear was present at Washington's deathbed and witnessed the various treatments ordered. Martha Washington, who knew rudimentary home remedies, was unable to deter the physicians' treatments of bloodletting ordered by Washington himself, and unsuccessfully appealed to Lear to get the doctors to stop.

As Washington continued to rapidly decline, Martha destroyed a superseded will, and Washington gave Lear last instructions to not have his body interred prior to two days after his death. Washington died on December 14, 1799. Washington had previously initiated an effort to compile and inventory his massive correspondence, and Lear continued that work after Washington's death. Martha Washington delegated the task of drafting letters acknowledging condolences to Lear before she quietly and purposefully commenced with destroying her and George Washington's private correspondence.

Lear, Tobias and George Washington. Letters and Recollections of George Washington being letters to Tobias Lear and others between 1790 and 1799, showing the First American in the management of his estate and domestic affairs, with a diary of Washington’s last days kept by Mr. Lear. New York: Doubleday, Page and Company, 1906.