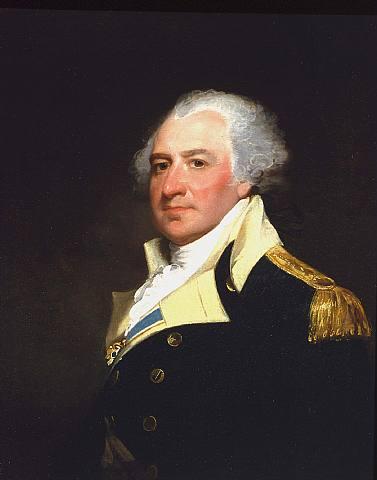 Thomas Mifflin was a distinguished merchant and politician from Pennsylvania who also served as a delegate and President of the Continental Congress, major general in the Continental Army, delegate to the Constitutional Convention, and first governor of the commonwealth of Pennsylvania. Despite these varied accomplishments, Mifflin is also known for his involvement in scandals as the first Quartermaster General of the Continental Army that tarnished his reputation and led to a falling out with George Washington.

Mifflin was born in Philadelphia in 1744, the son of wealthy Quaker merchants. He attended the College of Philadelphia (the future University of Pennsylvania) and four years after graduating opened a trading shop in the city with his brother. By 1769, Mifflin became involved in the colonial resistance against British policies. In 1772, he was elected to serve in the Pennsylvania Provincial Assembly, where he advocated for revolt against Great Britain. In 1774 and again in 1775, he was chosen as a delegate to the Continental Congress and ultimately supported the move toward independence.

Mifflin joined the Continental Army in April 1775, following the Battles of Lexington and Concord. On July 4, 1775, General George Washington announced in his General Orders that "Thomas Mifflin Esqr. is appointed by the Gen[eral] one of his Aid-de-Camps."1 Mifflin held the rank of Major and was mainly involved in writing messages, reports, and orders for Washington. After serving as an aide-de-camp for just over a month, Mifflin received Washington's appointment to become the Quartermaster General for the Continental Army.

Many soldiers and civilians praised the selection, including Richard Henry Lee, who wrote to Washington: "I think you could not possible have appointed a better Man to his present Office than Mr. Mifflin."2 Mifflin commanded the Quartermaster Department, overseeing the distribution of clothing and equipment to the soldiers of the Continental Army and was promoted to the rank of Colonel on December 22, 1775, to Brigadier General on May 16, 1776, and to Major General on February 19, 1777.

During his time as Quartermaster General, however, Mifflin came under intense scrutiny for his poor handling of the Department, particularly its financial affairs. On March 7, 1776, Washington's secretary, Lieutenant Colonel Joseph Reed, wrote to his commander: "I ought to mention to you a Continuance of one of your principal Officers in a private Trade with which I remember you was much dissatisfied last Fall- you can be at no Loss to know who I mean [Mifflin]."3 This accusation was just one of many made by soldiers and civilians alike against Mifflin.

By the spring of 1777, Mifflin also began to disagree with Washington's war strategy. Mifflin temporarily resigned as Quartermaster General during the summer, but remained in the Army. He then became aligned with members of the so-called Conway Cabal, a plot to replace Washington with Horatio Gates as Commander-in-Chief. Understandably, tensions between Washington and Mifflin emerged. Mifflin briefly returned to the post of Quartermaster later that year. However, on June 11, 1778, a letter from the President of the Continental Congress directed "an enquiry to be made into the conduct of the late Quarter Master general."4 Washington allowed Mifflin to leave the Army and attend to his defense. Mifflin continued to be inundated by allegations of his misconduct until finally resigning his commission in February 1779.

Mifflin returned to Pennsylvania following his military service. He served once again as a delegate to the Continental Congress and was elected its President in 1783. While in this position, he personally accepted Washington's resignation as Commander-in-Chief. Mifflin served as a member of the Constitutional Convention in 1787 and then as President of the Supreme Executive Council of Pennsylvania. In 1790, he was elected the first Governor of the Commonwealth. Washington and Mifflin remained in contact throughout this period, but primarily to conduct official business while Mifflin served as Governor. Mifflin served in that office for nine years before he died in Lancaster on January 20, 1800.

Purcell, L. Edward. Who Was Who in the American Revolution. New York, NY: Facts on File, 1993.