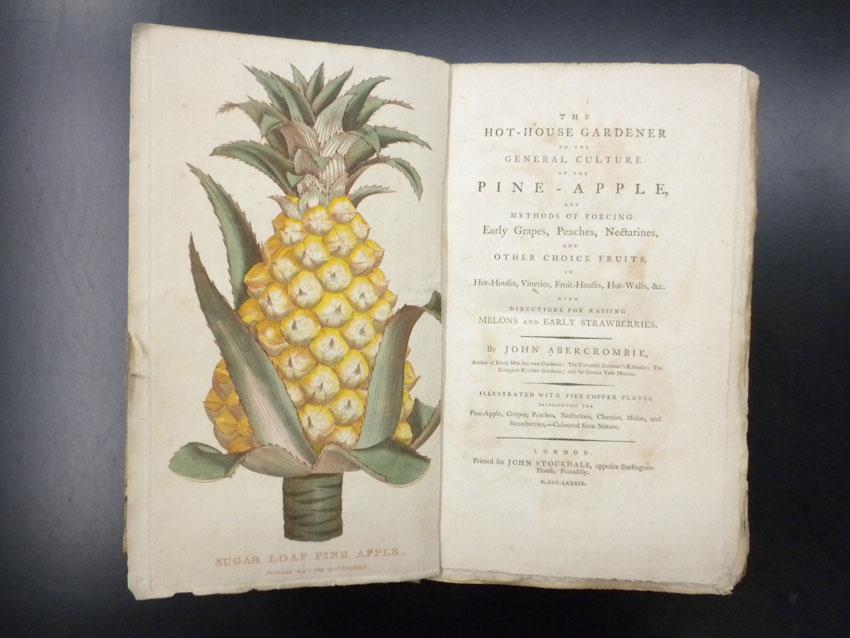 As a young man, making what would be his first and only trip outside of North America, George Washington recorded in his diary the culinary wonders he had found on the island of Barbados. Among the fruits he enjoyed on the trip were "China Orange" and "Avagado" (avocado). However, Washington admitted that while the pear was "generally most admired...none pleases my taste as do's the Pine."1

Originally a South American plant, the pineapple was first brought to Europe in the sixteenth century and remained a rare market find for nearly two centuries. In the eighteenth century, the English upper class considered the exotic and rather costly pineapple to be a suitable present for friends and those they hoped to impress. On their dining tables, the precious fruit often took the place of honor at the top of a fruit pyramid. When demand for pineapples exceeded the supply, members of the English gentry could rent one for display at an important dinner so that the same fruit would grace several tables in the course of its life.2

George Washington and other residents of British North America may have benefited from being in closer proximity to the pineapple's native environment, for he certainly was able to acquire them throughout his lifetime. Washington often asked captains of vessels carrying fish, flour, and other commodities from Mount Vernon to the West Indies to bring him "A few Pine Apples," sometimes as many as two or three dozen at a time.

In addition to getting them directly from the West Indies, pineapples were also purchased from local merchants."3 While the Washingtons generally bought pineapples, on at least one occasion they received them as a gift. The American Revolution disrupted trade with the West Indies, making pineapples scarce. When a woman in New York learned that Martha Washington had been sick, she sent her a number of things "by means of a flag of truce," including two dozen pineapples.4

While most pineapples were probably eaten in their natural state, cooks of this period did devise some methods for utilizing the leftover fruit, including the rind. Nelly Custis Lewis, Martha Washington's granddaughter who was raised at Mount Vernon, had two recipes for frozen desserts using pineapples. "Fromage of Pine Apples" used minced pineapple, while "Pine Apple Cream," called for steeping or "infusing" a pineapple rind in boiling cream. Utilizing the rind instead of the acidic fruit itself imparted the flavor of pineapple, without taking the risk of curdling the cream.5