More than a decade after he left the army to become a gentleman farmer, George Washington traveled back to the frontier that figured so prominently in his early life. In the fall of 1770, Washington traveled westwards with his friend Dr. James Craik and three servants, traversing for nine weeks and one day. The trip was organized so Washington could view the lands that he earned in return for his service during the French and Indian War. Many of the same aspects that interested Washington during his earlier trips westwards caught his eye once again.

Washington viewed western lands as important not just for agriculture, but also because they contained valuable mineral resources. During his trip, Washington visited a mine that produced coal "of the very best kind, burning freely & abundance of it." Nearby Washington viewed lands picked for himself and his brothers Samuel and John by Colonel Valentine Crawford in the modern day Fayette County, Pennsylvania. There he saw a possible mill site and described the lands he visited as "extraordinary, & contrary to the property of all other Lands I ever saw before, the Hills are the richest Land, the soil upon the sides and Summits of them, being as black as a Coal."1 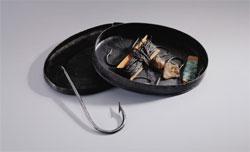 During this trip Washington was also able to renew old ties with Native Americans that he knew many years earlier. Washington received a message that Conengayote and several other Iroquois chiefs wanted to meet with him. Some remembered Washington from his diplomatic mission to the area for the Governor of Virginia in 1753, while others had only heard of him. When Washington and Craik set off after the meeting with Conengayote, they were accompanied by an interpreter, a Native American guide, and a warrior on a canoe trip along the Ohio River and its tributaries, during which they stopped at several Native American villages.

Washington also witnessed how this area connected with lands even further west. On the afternoon of November 13, 1770, Washington's group met two bateaus and a large canoe travelling toward the Illinois country, bringing provisions for troops located at Fort Chartres, on the east side of the Mississippi River, acquired by the British from the French in 1763 at the close of the French and Indian War. Washington was also able to talk to two men who had trekked as far west as Fort Chartres and up the Cumberland River, through Kentucky and Tennessee.

Fourteen years later Washington returned to the West during his first year home after fighting in the American Revolution. This time Washington checked on the condition of his unsettled bounty lands and to confer with tenants who had been remiss in sending money owed. Further, Washington wanted to learn about the feasibility of convenient water transportation between the Ohio Valley and settlements on the east coast via the Potomac River.

Once again, Washington and Dr. Craik were traveling companions, this time accompanied by Washington's nephew, Bushrod Washington, and Craik's son, William. The group traveled in greater comfort than Washington had known on earlier trips west, carrying along his wartime tent and some extra accoutrements including bedding, silver camp cups and spoons, as well as port and Madeira wine.

After a little over a month on the road and traveling nearly 700 miles, Washington returned home to Mount Vernon. There he wrote some additional notes about the trip, reflecting that although he had not been able to find out about the status of his lands in the Ohio, he still was "well pleased with my journey, as it has been the means of my obtaining a knowledge of facts-coming at the temper & disposition of the Western Inhabitants and making reflections thereon, which, otherwise, must have been as wild, incoher[en]t, & perhaps as foreign from the truth, as the inconsistencys of the reports which I had received even from those to whom most credit seemed due, generally were."2

From his investigations in the West, Washington felt that the settlers in the Ohio territory needed to be encouraged to trade with the new United States. The ease of getting to markets in the then-Spanish city of New Orleans by travelling on the Ohio and Mississippi Rivers meant that settlers could turn to Spain for commerce or political alliances. Potentially worse was the specter of settlers allying themselves with England, taking goods to market up the Mississippi River to Canada. Washington saw the solution to this problem in the opening of greater trade between Virginia and these western settlements.

Even Washington's will showed his concern for the West. That document records that Washington acquired 9,744 acres on the Ohio River and owned another 23,341 acres on the Great Kanhawa, with an additional 234 acres in Pennsylvania near Great Meadows, 3,051 acres in the northwestern territory, and 5,000 acres in Kentucky.