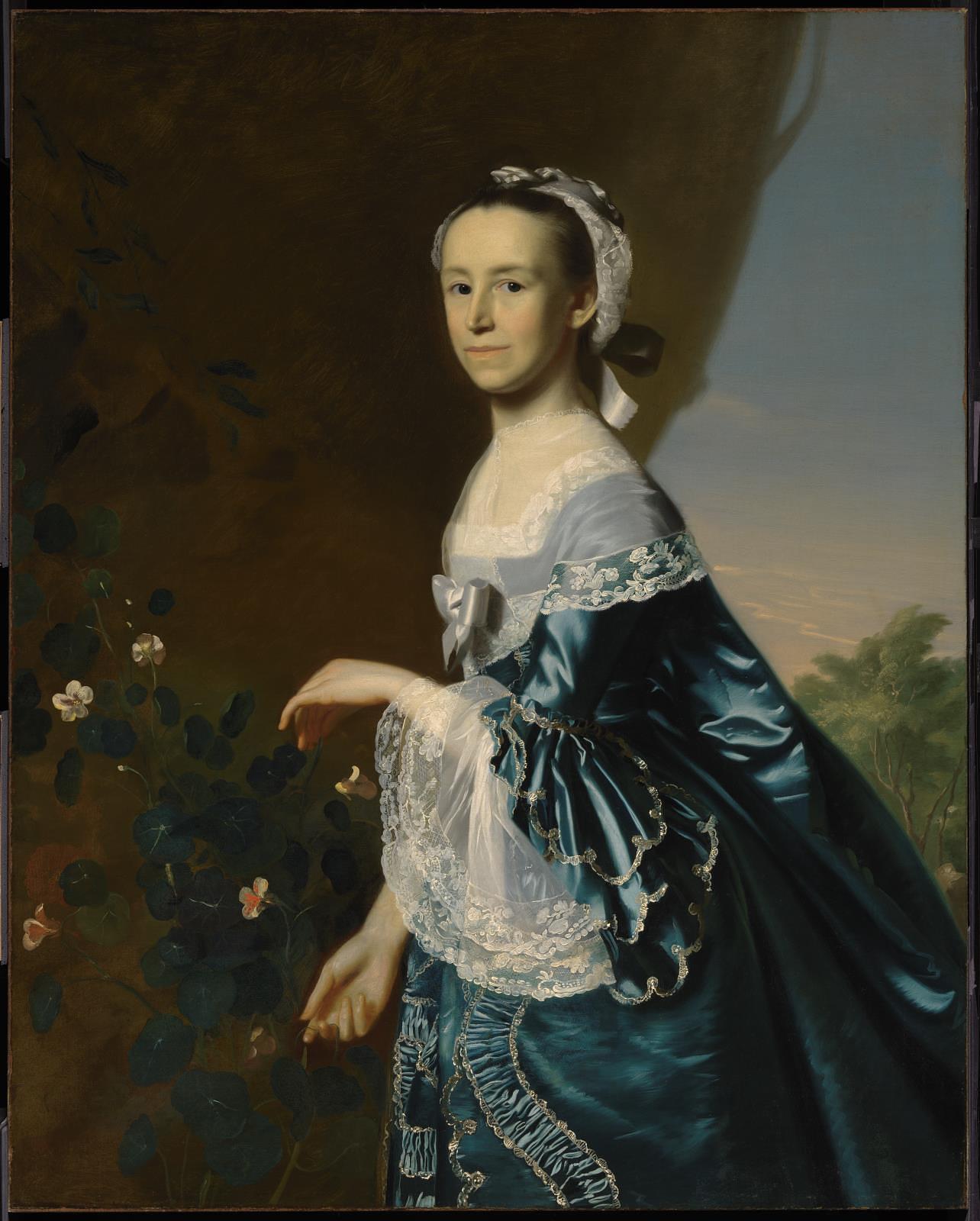 Mercy Otis was born September 25, 1728 in Barnstable, Massachusetts.  Born to the prosperous James and Mary Allyne Otis, Mercy was the third of thirteen children and the family's oldest daughter. Her outspokenness as an adult was the product of her family and her up-bringing. The support she received from her father and from her older brother James Otis Jr., allowed her intellectual curiosities to flourish from a young age.  Her brother James was a brilliant idealist and an early fervent supporter of the revolutionary movement who encouraged his sister to follow her academic interests. Although she did not get a Harvard education like her brother, she did receive some important tutelage from her Yale-educated uncle, the Reverend Johnathan Russel, with whom she studied classical literature, which would heavily influence her own political and historical writing.2

Warren’s self-assurance was also fostered throughout her life by her husband James Warren, a prominent Massachusetts politician whom she married in 1754.  The Warrens enjoyed a prosperous and happy marriage, although their relationship was somewhat unconventional because of Mercy's political interests and activism. Warren was a proud mother to her five sons and a frequent hostess for political meetings at her home in Plymouth. But she differed from even the most politicized women of her era in writing and publishing her own thoughts on the imperial crisis that led to the revolution in America.3

The Coming of the Revolution

Warren’s faith and values informed her strong sense of principle, and this ideology also contributed to her involvement in the fight for liberty prior to and during the Revolution. Like most American colonists, Warren did not initially object to British rule.  Over time however, her attitude changed with the passing of the Sugar Act (1764), Stamp Act (1765), Townshend Duties Act (1767), and especially with the arrival of British troops in Boston in October 1768, which Warren believed marked the end of any prospects for reconciliation between Britain and its American colonies. The involvement of so many family members in provincial politics, as well as the long-standing rivalry between her family and Thomas Hutchinson, the royal governor of Massachusetts, also led to Warren's emergence as a strong advocate for the patriot cause.4

Warren published political satires and pamphlets during the imperial crisis, serving as a key propagandist for patriot leaders in Massachusetts. Her plays and pamphlets were published in local Massachusetts newspapers, such as the Massachusetts Spy and the Boston Gazette, which appealed to Patriot readers. Her early plays were political satires that attacked British colonial injustices, often skewering crown officials, especially Governor Thomas Hutchinson, who was frequently the target of Warren’s attacks. In The Adulateur (1772), the transgressions of Hutchinson and other crown officials are personified by the character Rapatio—a play on the word "rape"—and condemned by the words and actions of characters such as Brutus, who represent the colonists who suffer as a result of Rapatio’s tyrannical leadership. In one particular scene, which foreshadows the American Revolution, Brutus states, “Of Servia’s virtuous sons, whose latest breath, Shall execrate a wretch, who dare enslave, A generous free and independent people. If ye pow’rs divine, Ye mark the movements of this nether world, and bring them to account- crush, crush these vipers.”5

Warren also published two other satirical plays, The Defeat (1773) and The Group (1775), as well as prose dramas called The Blockheads (1776) and The Motley Assembly (1779) in which she criticized Bostonians still loyal to the Crown after the colonies had declared independence. Although these plays are believed to have been written by Warren, she did not originally publish them under own name, instead initially releasing them anonymously.6

Warren wrote throughout her life, and while she published poems, histories, and plays, she also corresponded with an impressive array of people, including Abigail Adams and her husband John, a close political associate of both her brother and her husband. Warren had a long and frequent correspondence with both of the Adamses, and it is apparent from his letters that John Adams esteemed Warren’s writing and intelligence.7 In a letter to James written soon after the Boston Tea Party, Adams declared that he wanted "a poetical Genius," such as Warren, to describe the recent events in Boston harbor.8 Warren also corresponded with Catherine Macaulay, an English Radical Whig writer and historian. Warren's biographer argues that Macaulay's correspondence, and her own very public literary career, helped inspired Warren to use her own writing as a way to make her mark beyond the normal confines of women's lives.9

Warren and the Politics of the Early Republic 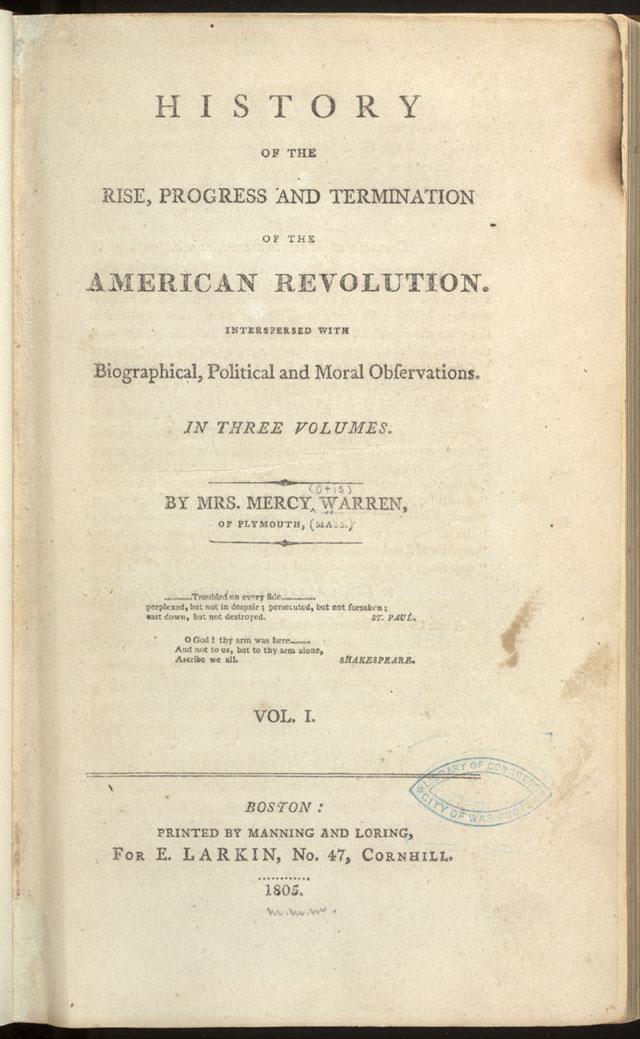 After the war was over, Warren continued to write and publish, sometimes making public pronouncements on controversial subjects. In her most famous work, History of the Rise, Progress, and Termination of the American Revolution, Warren stated that she was decidedly against the institution of slavery for it went against the principles upon which America was founded and could “banish a sense of general liberty.”10  Warren also alluded to the mistreatment of Native Americans in her history and detailed the harm they suffered throughout the revolutionary period.11  Preceding the publication of her history, Warren was critical of the Constitution drafted by the Philadelphia Convention in 1787, which she evaluated in Observations on the New Constitution, a work originally attributed to the Massachusetts Anti-Federalist Elbridge Gerry, although historians now believe that Warren wrote it.12  In this pamphlet, Warren condemned the creation of the strong central government outlined in the Constitution, as well as the lack of explicit protections of the people's liberties or rights.13

Prior to the publication of Warren’s history, she published Poems, Dramatic and Miscellaneous, a copy of which she sent to President George Washington, hoping to get his approval so that he would promote her literary her work.14 Washington wrote back several months later saying that while his duties as president had prevented him from reading everything in the publication, “from the reputation of its Author—from the parts I have read—and from a general idea of the pieces, I am persuaded of its gracious and distinguished reception by the friends of virtue and science.”15 Washington died in 1799, six years before Warren’s History of the Rise, Progress, and Termination of the American Revolution was published in 1805.

Warren’s book was one of the first and most comprehensive publications to document the history of the American Revolution, and Washington was a central figure. In her history, Warren inserted her respectful, but candid, opinion on the Founding Fathers, including Washington. Warren was complimentary of Washington’s values and accomplishments overall and deemed him the right choice to be president because of the great leadership he demonstrated while leading the Continental Army.16 Warren also criticized President Washington’s handling of certain political matters, such as the Jay Treaty, which in her view were not conducive to the prosperity of the nation.17 Warren was most critical of Washington’s actions as president when he appointed John Jay “to act in the double capacity of a negociator abroad and the first officer of justice [i.e. the Supreme Court's chief justice] at home.”18

Previously an Anti-Federalist, Warren became a staunch Democratic-Republican, and she was unafraid to censure the Federalist-leaning Washington and many of his cohorts, along with aspects of the new Constitutional government.19 Her boldness in being somewhat critical of a man of Washington's heroic stature just a few years after his death demonstrates her courage to speak her mind publicly at a time when women typically did not. Warren left the final verdict on the Washington presidency up to future historians. “The operations and the consequences of the civil administration of the first president of the United States, notwithstanding the many excellent qualities of his heart, and the virtues which adorned his life," she wrote, "have since been viewed at such opposite points, that further structures on his character and conduct shall be left to future historians.”20

Warren’s history of the Revolution was both lauded and panned by politicians of the era. Thomas Jefferson, the Democratic-Republican leader who was president at the time the work was published, praised Warren’s history and even helped with promotion and subscription efforts.21 Warren’s old friend, Federalist and former president John Adams, on the other hand, was not fond of his portrayal in her history. The two had a falling out due to what Adams perceived as Warren's slight of his influence on the events of the revolutionary era.22

Warren’s letters to presidents George Washington, John Adams, and Thomas Jefferson are widely available today, as are most of her other writings. Warren died on October 19, 1814 at the age of eighty-seven in her home state of Massachusetts.23 Ultimately, Warren left an important legacy and established a precedent for female freethinking and forthright writing in the United States through her writings and publications.

10. Mercy Otis Warren, History of the Rise, Progress and Termination of the American Revolution: Interspersed with Biographical, Political, and Moral Observations, 2 vols. (1805; Indianapolis: 1989), 1:14.

13. [Mercy Otis Warren],Observations on the New Constitution and on the Federal and State Conventions (Boston: n.p., 1788).