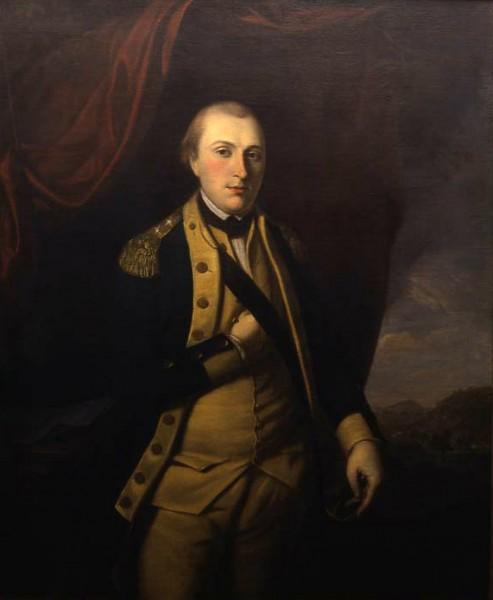 Visitors to Mount Vernon might be surprised to see the key to the Bastille, the notorious French prison, on display in the central hall. In 1790, Gilbert du Motier—better known as the Marquis de Lafayette—sent the key to George Washington on behalf of the people of France. To understand why Lafayette did this, it is necessary to understand the special relationship that developed between Washington and Lafayette during the American Revolution.

The bond between the two men grew so strong that they were more like a father and son, rather than a commanding general and his top-ranking officer. For Lafayette, there was no better person to receive the symbol of the end of ancient tyranny than the man who fought so bravely to establish the United States.

At first glance, Lafayette might seem an unlikely supporter of George Washington. Born in 1757, he came from one of France's oldest families. His ancestors served in the Crusades and alongside Joan of Arc. When Gilbert was two, his father died fighting in the Seven Years' War. Upon the death of his mother when he was eleven, Lafayette inherited one of his nation's largest fortunes. Five years later he married Adrienne de Noialles, a woman from an even more renowned family. But Lafayette was never impressed with status or riches, longing instead for military glory. He won a captain's commission in the French army and was appointed to the Black Musketeers in 1773.

However, in 1775 Lafayette's life took an unexpected turn. Like many noblemen, he lost his commission when the government reduced military spending. Called to the city of Metz for militia duty, he attended a dinner with the Duke of Gloucester, the younger brother of British King George III. The Duke complained about the American colonists who had risen up against British rule. He mocked their revolutionary beliefs in the equality of mankind and the right of the people to rule themselves. The Duke further explained how the colonists had organized the Continental Army under the leadership of General George Washington. Lafayette would always remember this dinner as the turning point of his life. "My heart was enlisted," he later confessed in his memoirs, "and I thought only of joining my colors to those of the revolutionaries."1

Lafayette studied the ideals of the American Revolution and planned to enlist in the Continental Army. Silas Deane was a representative of the Continental Congress sent to France to recruit officers. Even though Lafayette was only nineteen and had no experience in war, Deane offered him a commission. King Louis XVI ordered Lafayette to remain in France, but the defiant young nobleman ignored him and set sail for America in early 1777. When he finally arrived in Philadelphia, Congressmen James Lovell of Massachusetts refused to receive him, saying that Americans were tired of ambitious Frenchmen seeking glory. But upon realizing how wealthy and well-connected Lafayette actually was, and recognizing his sincere support for the American cause, Lovell recommended Lafayette's appointment as a Major-General.

Lafayette proceeded to General Washington’s camp along Brandywine Creek south of Philadelphia in September 1777. Here the Continental Army was fighting to halt General William Howe's advance toward the capital. Washington was immediately taken with Lafayette, especially when the Marquis explained, "I am here to learn, not to teach."2 Washington ordered Lafayette to join General John Sullivan's forces who were in a desperate fight on the army's right. The redcoats outflanked Washington and were trying to surround him. When Sullivan finally retreated, Lafayette reluctantly went with him, realizing only later that he had been shot in the leg. Washington sent his own surgeon to care for him, and when Lafayette was taken to the hospital the General told the doctors to, "Treat him as if he were my son."3

After Lafayette recovered, he became a valued member of Washington's close-knit military family. Lafayette in turn came to admire Washington's leadership more each day, especially during the winter at Valley Forge. Lafayette was overjoyed when news of the French alliance arrived in early 1778.

In June 1778, following the Battle of Monmouth Courthouse, Lafayette returned to France hoping to win more support for the United States. But while he was feted as a hero, he was not placed at the head of the French army. Count Rochambeau was chosen instead. By the summer of 1781, Lafayette was back in the United States. Washington sent him to Virginia to stop British raids along the James River. When Cornwallis' forces arrived in Virginia, Lafayette harassed the British general until Washington and Rochambeau could lay siege to him at Yorktown. In October 1781, there was no prouder soldier at Cornwallis' surrender than Lafayette.

Lafayette again returned to France as a national hero. Three years later on a tour of the United States he visited Washington at Mount Vernon. Lafayette remembered, "Our meeting was very tender and our satisfaction was mutual."4 He discussed his many concerns about the American nation. Like Washington, he favored the creation of a strong central government. But unlike Washington he recommended an immediate end to slavery. Back in France, Lafayette helped launch the French Revolution in 1789. He served in the National Assembly and drafted the Declaration of the Rights of Man. He proudly sent the key to the Bastille to Washington, who was serving as the President of the United States.

Lafayette fled from France when the revolution turned violent. He was imprisoned at Olmütz by the Austrians who considered him a dangerous radical. Lafayette's fortune was confiscated by the French government and many of his relatives died by the guillotine. He was finally set free and settled at La Grange, an estate near Paris nicknamed the Mount Vernon of France.

One of Lafayette's greatest joys in his later years came in 1824 when he made a triumphant tour of the United States. At Mount Vernon he went alone to visit the grave of George Washington, returning to his carriage with tears in his eyes. Lafayette remained a defender of democratic ideals until his death in 1834.

Marquis de Lafayette. Memoirs of General Lafayette: With an account of his visit to America, and of his reception by the people of the United States; from his arrival, August 15th, to the celebration at Yorktown, October 19th, 1824. Boston: E. G. House, 1824.