Like George Washington, Horatio Gates's early experience in war was acquired during the French and Indian War.

Although historians disagree as to how far his involvement went, Horatio Gates was one of the Continental Army officers who challenged Washington's authority during the Newburgh Conspiracy of 1783. This series of videos with historian James Kirby Martin examines the story of Newburgh. 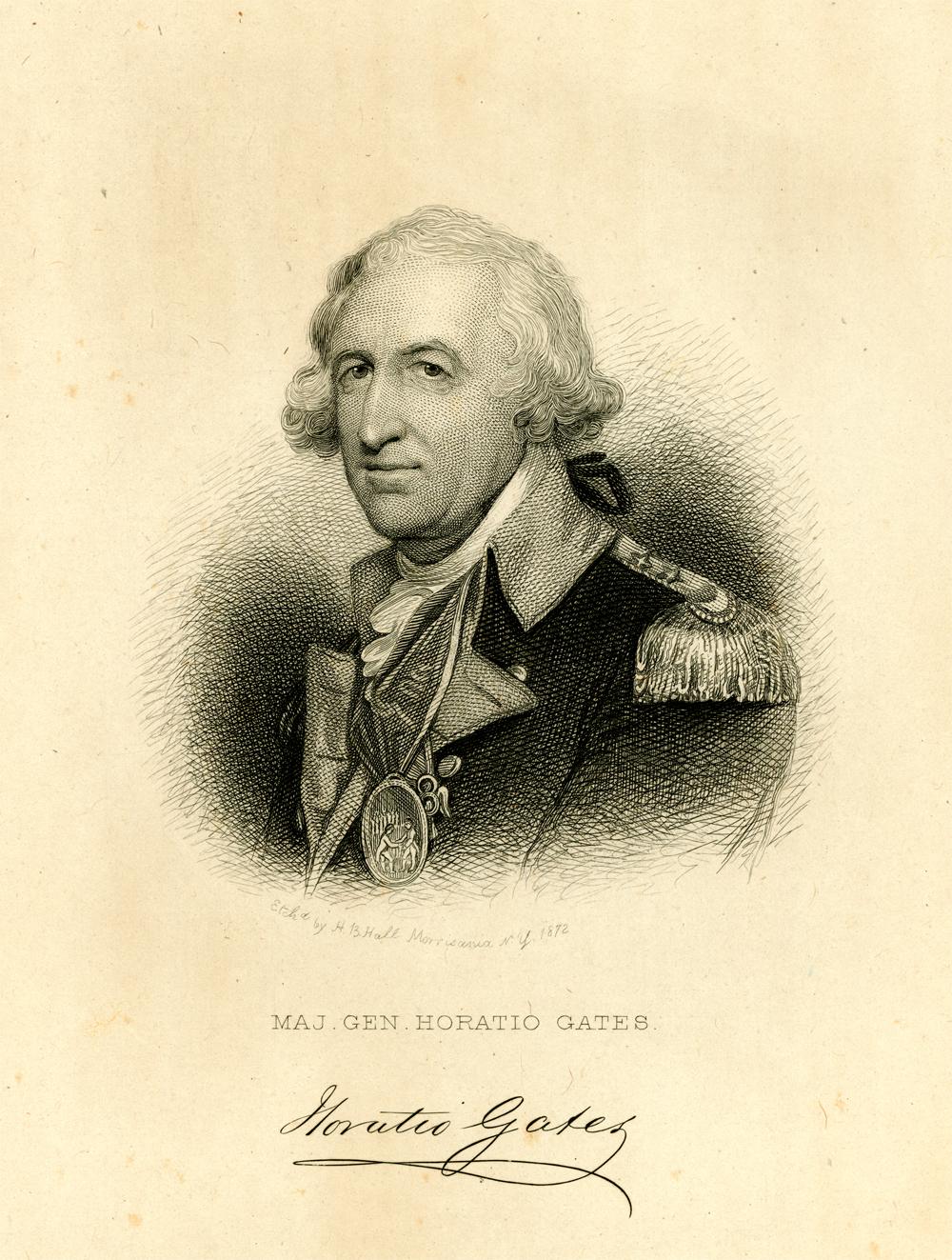 Born on July 26, 1727, in Maldon, England, Horatio Gates came to America at the age of twenty-two as a volunteer with the governor of Nova Scotia, Edward Cornwallis. In 1754, Gates rose to the position of captain and fought during the French and Indian War, suffering a wound during Major General Edward Braddock's defeat in western Pennsylvania in 1755.

After the French and Indian War, Gates returned to England and retired from the Royal American Regiment. In 1772, Gates returned to America and purchased a plantation in Berkeley County, Virginia. When the American Revolution broke out in 1775, Gates, a strong supporter of independence, became a brigadier general. Promoted to major general in 1776, he took command of troops in New York (Northern Army), and turned back Major General Guy Carleton's invasion of northern New York in October 1776. The victory gave the Americans time to prepare for the second British invasion the following year.

When British troops under the command of Major General John Burgoyne invaded New York in 1777, Gates' army defeated Burgoyne twice, on September 19, 1777 and October 7, 1777. Gates' troops forced Burgoyne to surrender his 5,700 man army near Saratoga on October 17, 1777. This victory, a major turning point of the American Revolution, convinced France to form an alliance with the Americans against Great Britain in 1778.

Tensions between Gates and General George Washington grew immediately following Saratoga, after Gates informed Congress directly of his victory rather than informing his Commander-in-Chief. Washington was further angered that Gates did not promptly return troops sent to help Gates during the New York campaign. General Washington was also convinced that Gates played a role in the Conway Cabal in late 1777, which was a supposed plot to remove Washington from command and replace him with Gates. In November 1777, Gates became president of the Board of War and technically became Washington's superior. Bickering continued between the two men as Gates drew up plans for an invasion of Canada without consulting Washington.

In the spring of 1778, Gates returned to field command in the north, controlling troops in New York and Massachusetts. Gates took command of the Southern Army in South Carolina in July 1780 to meet the British army that had invaded that state earlier in the year. Abandoning the cautious strategy he employed against Burgoyne in 1777, Gates marched his army toward the British troops in Camden, South Carolina, despite the fact that his men were running low on supplies. This action led to the Battle of Camden on August 16, 1780, which was one of the largest American defeats of the war. As the American troops retreated, Gates left the battlefield and abandoned his army, riding nearly 200 miles in three days. Accused of cowardice, his reputation was ruined. Gates was removed from command in October 1780.

Congress briefly reinstated Gates into the army in the summer of 1782, but after uneventful service he left for the final time in 1783. In 1790 Gates sold his Virginia plantation, freed his slaves, and bought an estate in New York called "Rose Hill Farm." He ended his career serving one term in the New York legislature from 1800-1801. Gates died on April 10, 1806.