Martha Washington's Great Cake was a large celebratory cake consisting of fruit and spices. In 1797, George Washington refused to serve a third term as President. Washington bade the public farewell and returned to Mount Vernon in time for Christmas festivities. As part of the Yuletide celebrations, Martha Washington arranged for a type of fruited cake known as a "Great Cake" to be baked and served by enslaved people as a dessert on the last of the twelve days of Christmas, known as Epiphany or Twelfth Night.

Great Cakes were a common dessert in the Colonial Era and tended to be very large, as reflected by the list of ingredients that varied according to the version of the recipe used. One transcription of Martha Washington's Great Cake recipe utilized the following ingredients: a peck of flour, three quarters of a pound of sugar, three pounds of melted butter, and seven pounds of currants. Added to these ingredients were four grated nutmegs, cloves, cinnamon, mace, caraway seeds, water, and salt. Other ingredients included yeast derived from barm (the foam that rises to the top of fermented liquor), and liquid derived from posset, a warm mixture of ale and cream. 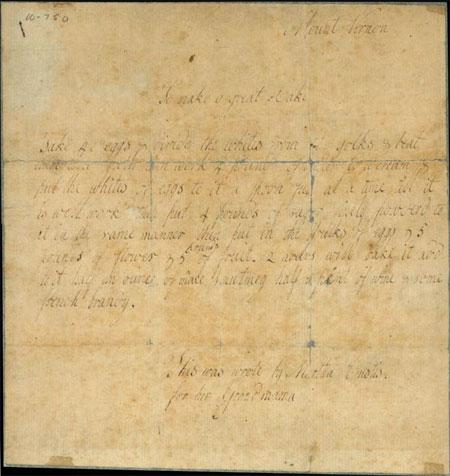 The cake was baked by an enslaved cook in a medium oven in a large mold so that it would have risen, with the oven's heat reduced once the cake started to rise and firm. The end result was a risen cake similar to panettone, the Italian delicacy that lies somewhere between a cake and bread in texture and is also commonly eaten at Christmas. However, Martha Washington's Great Cake would have had a denser texture than panettone and contained greater quantities of fruit and spice than the Italian sweet.

Among Martha Washington's surviving papers was a recipe written out by her granddaughter Martha Parke Custis that utilized different ingredients and quantities from more common Great Cake recipes. Custis' recipe included forty eggs worked into four pounds of butter, four pounds of sugar, five pounds of flour, and an equal quantity of fruit. The recipe also called for mace and nutmeg, and to these dry ingredients, wine and brandy were added. When all the ingredients were combined the cake was baked for five and a half hours. Though Martha Washington was adept at entertaining, she did not cook herself. Instead, enslaved people worked in the kitchens and would have prepared the Great Cake for the Washingtons.