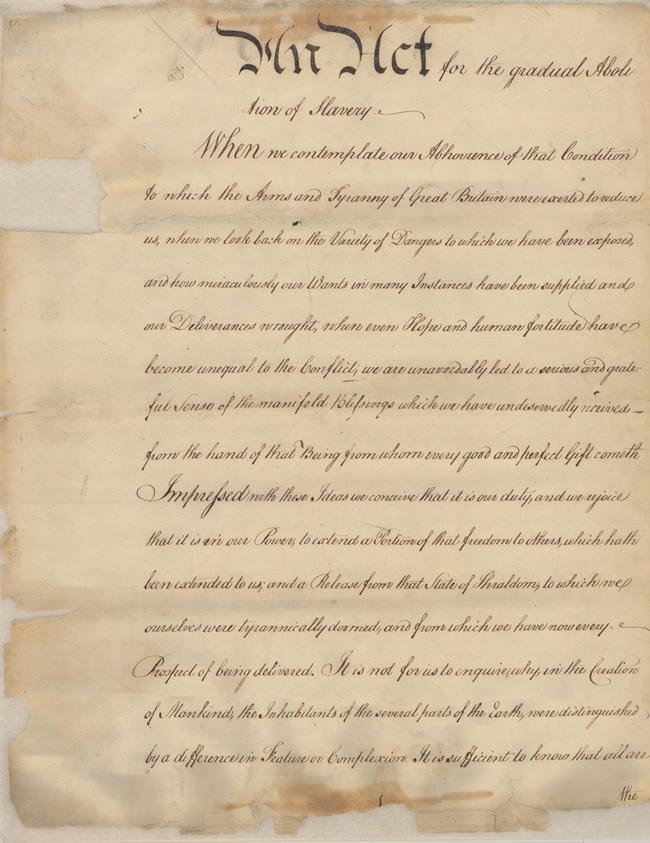 The Gradual Abolition Act of 1780, the first extensive abolition legislation in the western hemisphere, passed the Pennsylvania General Assembly on March 1, 1780. To appease slave owners, the act gradually emancipated enslaved people without making slavery immediately illegal. The act permitted Pennsylvania slaveholders to keep the enslaved individuals they already owned unless they failed to register them annually. At the same time, the act provided for the eventual freedom of individuals who were newly born into slavery.

Two years before the passage of the 1780 Gradual Abolition Act, Pennsylvania lawmakers entertained the idea of gradual emancipation. On August 21, 1778, an assemblyman presented a draft bill for the gradual abolition of slavery in Pennsylvania to the General Assembly. After its first reading, the House tabled the bill in favor of more pressing reports and petitions regarding Revolutionary War efforts.1

In 1779, George Bryan, a judge who served as vice president on the Pennsylvania Supreme Executive Council, authored the legislation that became the Gradual Abolition Act. He originally drafted and submitted his bill as a part of a message to the General Assembly on February 5, 1779. Bryan’s bill focused on the emancipation of children born into slavery after a certain period of laboring for their masters. Females would obtain their freedom at 18 years of age. Males would be freed at the age of 21. Additionally, Bryan’s bill also called for slaveholders to register enslaved people. In response, the assembly appointed a specific committee, consisting of four legislators, to present a gradual abolition bill in the 1780 session.2

On the morning of  March 1, 1780, House Speaker John Bayard read the Gradual Abolition Act as well as petitions from inhabitants of Lancaster and Chester counties who opposed the bill.

The act contained fourteen sections in total, some of which outlined the rules and regulations to gradually abolish slavery in Pennsylvania. The first two sections of the act praised God for delivering Americans from the “tyranny of Great Britain.” It urged citizens of the fledgling United States to extend God’s merciful hand towards “negro or mulatto slaves.”3 Section Two compared the brutalization of human slavery to British oppression of its colonial subjects.

Sections four through eleven of the act outlined the regulations that would govern abolition and the restrictions placed on slaveholders. Section Four stated that every “negro or mulatto child” born of enslaved mothers after the bill’s passage would be considered “servants” to their masters until they turned 28 when they would receive their freedom. Section Five made the importation of enslaved people illegal and required masters to register their enslaved workers annually.  Section Ten prohibited non-residents of Pennsylvania from keeping their enslaved workers in the state longer than six months. The General Assembly passed the bill with a 34 to 21 vote. The bill also voided existing legislation that discriminated against African Americans.4

Certain Pennsylvania assembly members opposed the bill because they worried that the “pernicious consequences” of gradual abolition may impact their neighboring states and weaken the war effort.  Moreover, members of the assembly considered the timing of the bill to be premature and improper because newly emancipated enslaved people might be “stimulated by the enemies of their masters” into joining British forces.5 Additionally, these legislators were apprehensive about the citizenship status that a newly emancipated person would hold in society.

The northern states followed Pennsylvania’s lead by providing for either immediate or gradual emancipation of enslaved people. Between 1781 and 1783, Massachusetts set a precedent for immediate emancipation in the wake of three court cases centered on Quock Walker, an enslaved man who sued for freedom under the Massachusetts Constitution of 1780.6 In 1784, Connecticut and Rhode Island became the second and third states to enact gradual emancipation laws. These statutes outlined strict rules concerning the status of children born to enslaved mothers as well as the importation of enslaved people. Connecticut’s gradual abolition act stated that all children born into slavery could obtain their freedom by the age of 25. However, this rule did not apply to enslaved individuals sojourning or traveling in the state with their masters. In 1799, New York adopted gradual emancipation using Pennsylvania’s act as a model. In 1804, New Jersey became the last northern state to pass a graduate emancipation statute. Like Pennsylvania’s statute, New Jersey’s legislation appeased slaveholders by granting an enslaved persons’ freedom only after laboring their masters for a certain period. Females would work until they were twenty-one years old and males until twenty-five years old.  In this case, the gender of the enslaved person determined when they received their freedom.

In September 1786, George Washington expressed his support of gradual abolition in a letter to John Francis Mercer. Mercer served as a delegate from Virginia in Congress (1783-1784) and as a lieutenant in the Third Virginia Regiment during the American Revolutionary War. In the letter, Washington disclosed his intentions to never purchase another enslaved person unless it was necessary in certain situations. Washington further expressed his hope for Virginia to “see some plan adopted, by the legislature by which slavery in this country may be abolished by slow, sure and imperceptable degrees.” 7

Ironically, the Gradual Abolition Act of 1780 later jeopardized Washington’s status as a slave owner. During Washington’s residence in Philadelphia, while serving as President of the United States, he instructed his secretary, Tobias Lear, to seek an analysis of the act’s emancipation provisions from Attorney General Edmund Randolph. Based on Randolph’s findings, Lear advised Washington to rotate enslaved workers he had brought from Mount Vernon out of Pennsylvania every six months to prevent their legal emancipation. Washington instructed Lear to keep this matter to himself: “I request that these Sentiments and this advise may be known to none but yourself and Mrs. Washington.”8 He had the enslaved people from Mount Vernon transported across state lines every six months to prevent their legal emancipation. These enslaved people included Washington’s cook Hercules, his valet Christopher Sheels, Martha Washington’s lady's maid Ona Judge, and other enslaved house workers, including Moll, Austin, Giles, and Richmond.

Eight years after passing the Gradual Abolition Act, the assembly of Pennsylvania amended the legislation in 1788.10 The amendment prohibited slaveholders from transporting pregnant enslaved women out of the state with the intention of having the child born into slavery elsewhere, rather than labor for their master until the age of 28. In addition, the amendment declared that enslaved individuals owned by people who intended to move or settle in Pennsylvania permanently should be declared immediately free. This provision did not affect the Washingtons since they were only temporary residents of the state.

Pennsylvania’s Gradual Abolition Act of 1780 and those following it transformed African American life in the United States. Many individuals who were newly emancipated had the chance to create a new identity for themselves and migrate to other parts of the North to pursue opportunities. Some free African Americans looked for their loved ones and aided them in their liberation from slavery. Others flocked to urban centers like Philadelphia to join free black churches and various civic associations. Ultimately, the gradual abolition acts in the northern states, starting with Pennsylvania, facilitated the emergence of a free African American population.

1. General Assembly of Pennsylvania, Journals of the House of Representatives of the Commonwealth of Pennsylvania (Philadelphia: John Dunlap, 1782), 218.

3. General Assembly of Pennsylvania, “An Act for the Gradual Abolition of Slavery,” (1780), The Avalon Project: Documents in Law, History and Diplomacy, accessed 1/20/2020, https://avalon.law.yale.edu/18th_century/pennst01.asp.

4. Ibid. See Section 14: “An Act for the better regulating of Negro in this province” that was passed in 1725.

10. General Assembly of Pennsylvania, An Act to explain and amend an act, entitled “An Act for the gradual abolition of slavery.” (Philadelphia: T. Bradford, 1788).

Berlin, Ira. "The Revolution in Black Life." In The American Revolution: Explorations in the History of American Radicalism, edited by Alfred F. Young, 349-82. DeKalb, IL.: University of Northern Illinois Press, 1976.