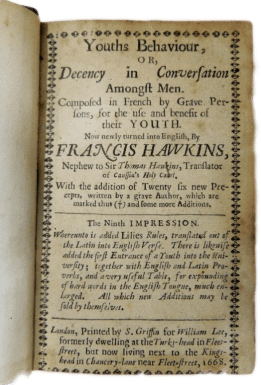 George Washington's education resulted from a process of close study and imitation of the Virginia elite. This informal education helped to shape Washington's perceptions about the world and ultimately provided him with both self- discipline and social grace, skills that helped him in polite society. Born into mid-level gentry status, Washington seized opportunities to fill in gaps in his formal education through extensive readings, practicing elite behaviors, and formulating a list of prominent connections. Three major influences contributed to Washington’s early social education: the Rules of Civility and Decent Behavior in Company and Conversation, an etiquette manual dating to the sixteenth century, guidance from his half-brother Lawrence Washington, and the influence of Lawrence's in-laws, the Fairfax family.

During Washington's boyhood, he schooled himself in the gentlemanly arts by copying the 110 maxims of the Rules of Civility. This book of social maxims encouraged one’s deference to superiors and instructed Washington on how to develop a fine line between self-abasement and humility. One rule mandated that all actions done in company must show respect to those who are present. Such lessons were critical in the eighteenth century a time when etiquette and self-presentation were key badges of social and economic class. Knowledge of skills such as surveying or mathematics, which Washington gained largely through self-study, would have been meaningless for his social advancement without displaying appropriate manners. From an early age, Washington used this etiquette manual to master the arts of interpersonal skills and self-control that were crucial to his future leadership.1

In 1747, following his father Augustine Washington's untimely death, George Washington moved at the age of fifteen to live with his half-brother Lawrence at Mount Vernon. Lawrence was worldly in ways that young George was not, having sailed in the British Royal Navy and directly experienced English metropolitan culture. Under Lawrence’s tutelage, George Washington learned to excel in riding, hunting, fencing, and even dancing. In addition, Lawrence's marriage to Anne Fairfax provided George Washington with access to one of Virginia's most powerful families. From an early age, Washington was a welcome visitor at the Fairfax's ground estate, Belvoir.2

In the spring of 1748, William Fairfax offered the sixteen-year-old Washington his first job: accompanying George William Fairfax on a surveying trip to Fairfax's property in the lower end of the Shenandoah Valley and the Northern Neck of Virginia.3 Between 1749 and 1752, Washington conducted more than 190 surveys, which provided funds for his first purchase of land on Bullskin Creek in lower Shenandoah.4 The Fairfax family connection gave Washington a livelihood and contributed to the refinement of his social behavior.

At the age of nineteen in 1751, George Washington made his first and only trip away from North America when he travelled with Lawrence to Barbados. While the trip's original purpose was to locate medicine to treat Lawrence's tuberculosis, it afforded Washington a unique opportunity to see a larger world. On November 4 1751, Washington arrived at Bridgetown full of anticipation.5 In the following week, he enjoyed a long series of dinner invitations and social gatherings. On November 9, for example, Washington shared meals with Major Clark Gedney and Judge William Maynards, members of the General Assembly for many years. Washington was a conscientious observer of the dinner, he later recalled, "that was the greatest collection of fruits I have yet seen set on the Table there was the Granadella the Sappadilla Pomgranate Sweet Orange Water lemmon."6 Although Washington's stay in Barbados was shortened because of a bout of smallpox, the trip was socially significant nonetheless.

By the time George Washington entered adulthood, he had mastered the techniques of self-presentation that would later help him to shape and refine his public image. His famed poise and reputation for disinterested virtue were, in many ways, an outgrowth of the lessons that he first encountered in the Rules of Civility. As a general and as president, Washington was widely described as someone who could take conflicting opinions and give a peaceful resolution in a calm, considered, and thoughtful manner. A formal education alone could not have imparted him with such admirable self-control. Washington's social education enabled him to maintain a delicate balance between ambition and modesty throughout his life.

6. Ibid, 49-50. William Maynard was a member of the Governor's Council and Chief Judge of his Majesty's Court of Common Pleas for the parish of St. Andrews from 1752 to 1755. Gedney Clarke Sr (1711-1764), was a prominent merchant and planter in Barbados. His sister Deborah Clarke Fairfax was William Fairfax's wife.

The Rules of Civility and Decent Behavior