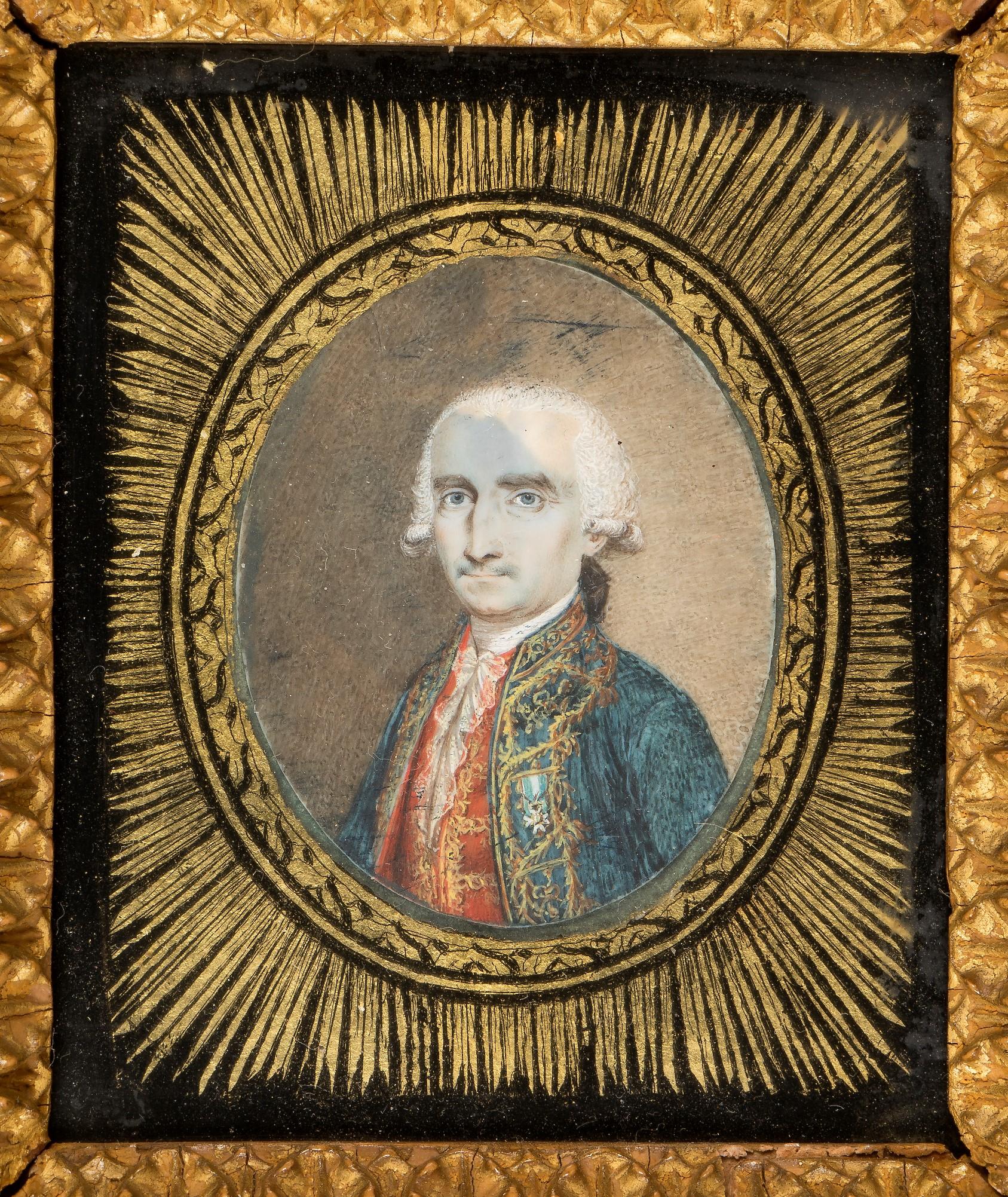 Diego de Gardoqui, a shrewd businessman, was commissioned by King Carlos III of Spain to oversee Spain’s financial and material support of American colonies during the War for Independence. Operating mainly through his trading company Joseph Gardoqui e Hijos, headquartered in the major northern Spanish port of Bilbao, Gardoqui dispatched supplies of all kinds to the Continental Army. After the war, he was appointed Spain’s first ambassador to the Continental Congress, and in 1789 attended the swearing-in of George Washington as first President of the United States. He was one of those key figures who, though not appearing in historical paintings, can readily be imagined behind the curtain shown in the portraits of heroes or politicians.

Diego María de Gardoqui y Arriquíbar was born in Bilbao in 1735. He was the second of eight children. His father José was an active trader who founded several companies and, in 1763, was granted permission to import cod from England and America. The young Diego spent five years in London as apprentice to George Hayley, a director of the East India Company. In London he not only learned the language, but also became familiar with Anglo-Saxon culture and temperament. He completed his training under his uncle Nicolás de Arriquíbar at the Royal Basque Society of Friends of the Country, a key Enlightenment institution.

Following José’s death in 1765, the sons continued to expand the family business. It became the leading importer of salt cod from Newfoundland and the northern ports of New England. They acquired the cod mainly in exchange for Spanish iron and wools.

As the years went by, the trading house of Joseph Gardoqui e Hijos began to experience financial difficulties due to fierce competition from other companies, and particularly from the port of Santander. Fortunately for future American revolutionaries, the company was able to forge stronger links with merchants operating along America’s eastern seaboard, and especially in Salem, Boston, and Marblehead. In Marblehead, a town which grew up around the cod trade, its main partners were Elbridge Gerry and Jeremiah Lee, two figures who were soon to play a major role in the independence of the fledgling nation.

Both Gerry and Lee became members of the Massachusetts Provincial Congress at the start of the Revolution. Massachusetts organized the force that would become the Continental Army under George Washington’s command. Washington himself described his troops as a “motley crew."1 Most had no uniform, were armed with broken rifles, and had neither the gunpowder nor the weapons needed to engage with Britain’s professional troops.

In late 1774, Jeremiah Lee sent Gardoqui an urgent request for weapons and gunpowder. In a letter dated February 17, 1775, Gardoqui replied that he was sending 300 muskets with bayonets and 600 pairs of pistols, but could not secure gunpowder without considerable prior warning, since “whatever there is made in this Kingdom is for the government.”2 On July 5, 1775, Elbridge Gerry ordered “good pistols” and powder, providing advance payment in cash and bills of exchange. The powder was sent in large quantities during the following months.3 This was the first foreign aid received by the American Revolution.

In point of fact, neither the firearms nor the gunpowder could leave Spain unless officially authorized by the Crown, which meticulously monitored every musket made at the Royal Factory in Placencia as well as every kilogram of explosive. Gardoqui was therefore bound to secure the Spanish Government’s permission for their shipment. The valuable cargo was loaded onto vessels belonging either to his American partners or to his own company. They crossed an ocean infested with privateers and Britain’s Royal Navy, their cargo kept wholly secret, a routine practice throughout much of the American Revolutionary War, which was abandoned only when Spain officially declared war on Britain in June 1779.

Gardoqui continued to supply provisions covertly. Once officially entrusted with this task by the Spanish government, in 1777-78, he handled requests from Arthur Lee, the envoy sent by the Continental Congress to Spain in search of military assistance, with whom he held several secret meetings in the northern city of Vitoria. Writing to Lee in 1777, Gardoqui noted: “I have given you a further proof of my attachment for the Colonies, and I must also add, with all truth, that the principal persons here are of the same opinion, although the present state of affairs obliges them to make no show thereof."4 Gardoqui stepped up his shipments of weapons, blankets, boots, and cloth for uniforms, which did much to alleviate the plight of Washington’s troops during the harsh winter at Valley Forge and throughout later campaigns. He also dispatched naval supplies, for which he received payment in kind, in the form of consignments of tobacco, tar, and bitumen.

Gardoqui adhered steadfastly to his mission, which required an increasing amount of administrative effort as well as countless trips from Bilbao to Madrid. He was involved in assembling arms and equipment for the great expedition – a fleet of ships carrying 11,000 soldiers – which set sail from Cádiz in April 1780 bound for Havana, where the troops were to join Governor Bernardo de Gálvez’s fight against the British in the Gulf of Mexico, Florida and Louisiana. He also corresponded frequently with John Jay, the new envoy from Congress to the Spanish  government in Madrid, whom he met on several occasions in 1780 and 1781, handing over a total of over 265,000 pesos or Spanish milled dollars.5 At the same time, he arranged other joint consignments with France.

In 1785, the war now over, Gardoqui traveled to New York as the first official ambassador of the Kingdom of Spain. On April 30, 1789, he was a guest of honor at the historic swearing-in of George Washington as the first President. Gardoqui and the French ambassador walked behind Washington in the inaugural parade. During his stay in New York, where he lived at the southern end of Broadway (close to Wall Street), he earned acclaim as an accomplished diplomat and gentleman, a gourmet and wine expert, known for his courteous attitude towards ladies.

He remained in contact with many of the Founding Fathers, including John Adams, Benjamin Franklin, and John Jay, as well as George Washington himself, with whom he enjoyed a particularly close friendship. In a letter to Gardoqui, Washington remarked: “I am assured both of your political ability and of your friendship for these States.6 In November 1787, Gardoqui gave the President a fine four-volume edition of Miguel de Cervantes’ novel Don Quixote, which is now in the Fred W. Smith National Library for the Study of George Washington at Mount Vernon.

During his stay in New York, he contributed to the erection of Saint Peter’s Church, the first Catholic parish in the city. Gardoqui’s diplomatic mission was brought to a close in late 1789. On his return to Europe, the King confirmed his trust in Gardoqui by appointing him Secretary of the Royal Exchequer. A weary Gardoqui ended his career as ambassador in Turin, where he died in 1798 at the age of sixty-three.

Cava, Begoña. “The historical contribution of Diego de Gardoqui to the Independence of the U.S.” in Recovered Memories. Spain and the support for the American Revolution. Iberdrola 2009. https://www.iberdrola-arte.es/FicherosIberdrola/Publicaciones/8/33bfaf64-c9a1-4f4c-83af-69d33bf520e3.pdf

U.S. Department of State. The Diplomatic Correspondence of the American Revolution. N. Hale and Gray & Bowen, 1830.