David Bushnell was an inventor and a veteran of the Continental Army during the American Revolutionary War. His most notable invention was “The Turtle,” a one-man submersible which became the first submarine to be used in active combat – albeit unsuccessfully – during the Revolutionary War. This feat left a lasting impression on his peers, including General Washington, who dubbed Bushnell’s work “an effort of genius.”1

Bushnell was born on August 30, 1740, in Saybrook, Connecticut, to farmers Nehemiah and Sarah Bushnell. A keen mechanic, he used his inheritance to enroll in Yale College at the relatively old age of 31. At Yale, Bushnell conducted experiments into gunpowder. Convinced he could explode it underwater, he successfully detonated two ounces and later two pounds of gunpowder in this manner. After refining these experiments, Bushnell focused on inventing a submarine to carry these mines underwater. In early 1775, Bushnell built his submarine with his brother Ezra on Poverty Island in the Connecticut River. Around this time, Yale began to form Revolutionary regiments and declared its allegiance to the Second Continental Congress – something which helped to shape Bushnell’s allegiances.

After graduating in July 1775, Bushnell returned to Poverty Island to test his now-complete submarine. Throughout the summer, Bushnell conducted multiple successful tests of the submarine with help from fellow Yale graduate Dr. Benjamin Gale. Gale lauded the Turtle to Benjamin Franklin, who visited Bushnell and his invention in October 1775 en route to General George Washington’s Boston camp. Meetings like this one likely brought Bushnell’s machine to the attention of the Continental Army and Congress. By February 1776, Governor Jonathan Trumbull of Connecticut agreed to provide £60 to Bushnell for the production of his invention.2 The most detailed description of the Turtle is found attached in a 1787 letter from Bushnell to Thomas Jefferson:

“The external shape of the sub-marine vessel bore some resemblance to two upper tortoise shells of equal size, joined together; the place of entrance into the vessel being represented by the opening made by the swell of the shells, at the head of the animal.”3 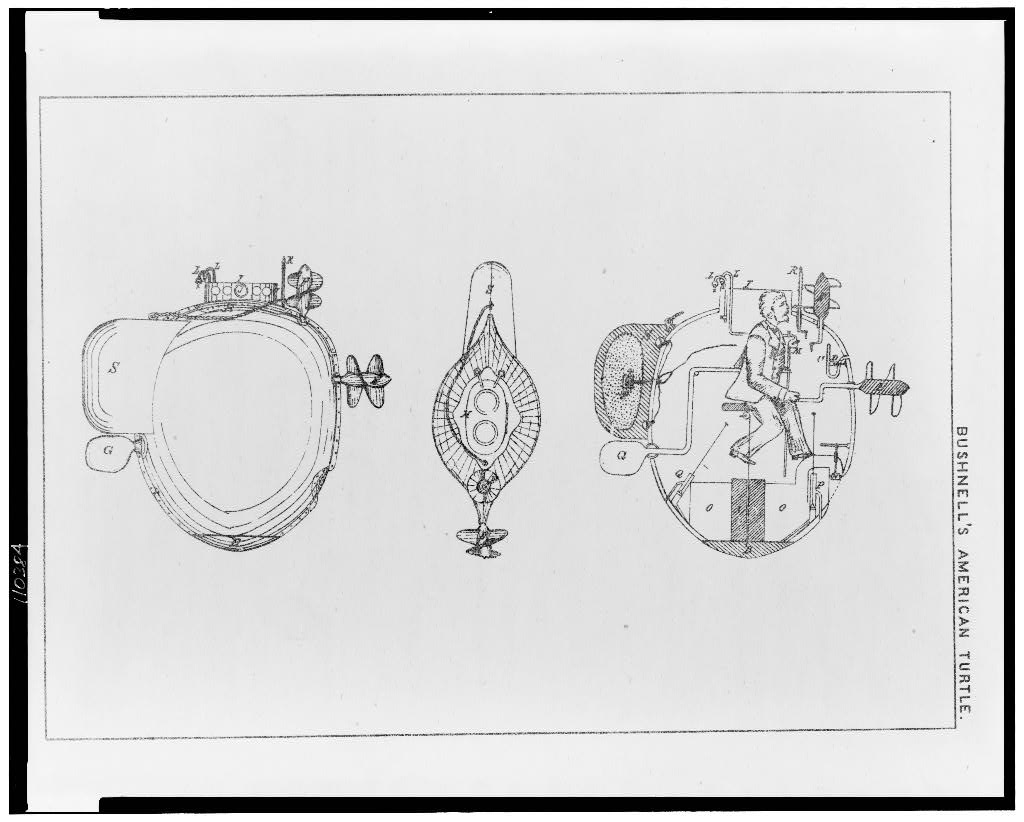 By the spring of 1776, Bushnell was eager to test the Turtle in battle after winter ice had prevented access to the British fleet in Boston. However, the plan was further delayed when the British fleet moved south to New York in July 1776. Due to British success in New York, Washington decided that the Continental Army needed to act as soon as possible and met Bushnell to arrange the transport of his Turtle to Long Island. After arriving in New York, Ezra Bushnell, who had trained for months to pilot the vessel, fell ill, leaving the Turtle to be piloted by the inexperienced Sergeant Ezra Lee.

After some basic training, Lee set out at midnight on September 6, 1776, with the flagship HMS Eagle as his target. Lee was able to sail underwater up to the ship’s hull, but he accidentally struck an iron bar on the underside, which the Turtle could not penetrate. After this failure, Lee’s inexperience as a submarine pilot showed. He failed to reattempt drilling and lost control of the Turtle, losing sight of the Eagle.4 By the time he found it, sunrise was underway and so Lee fled. Upon passing Governor’s Island, he feared he was seen and detached the mine. One hour later it exploded in the East River, proving that Bushnell’s mines worked, although the mission had failed.

In late September 1776, Lee set out for another attempt on three British frigates anchored near Fort Washington, this time targeting the sterns at water level. This mission was also a failure, and on October 9, the three frigates – the Phoenix, Roebuck and Tartar – sailed through a blockade outside Fort Washington and fired on American ships, sinking the sloop carrying the Turtle. Bushnell salvaged it and brought the vessel back to his farm. However, his time in the Continental Army had rendered him extremely ill and this, combined with a lack of military funding, meant the Turtle was never used again.

Bushnell continued to work with the Continental Army. Despite the Turtle’s failures, his expertise with underwater mines was invaluable. Bushnell tried another attack on August 13, 1777, using two large mines to encircle and attach to the British frigate Cerberus; however, one destroyed a nearby schooner first, alerting the British, who avoided the second mine.

In fall 1777, Bushnell relocated to Bordentown, New Jersey, on the banks of the Delaware River, close to a British naval fleet. Here he developed mines out of kegs, which could float down the river and were spring-loaded to detonate on contact. The barrels were floated down the Delaware River in late December 1777 and reached Philadelphia and the British fleet there on January 5, 1778. Ice on the river had caused all British ships to retreat to wharves, and the only ships hit were a two-man rowboat and a civilian barge. This caught the attention of the British who pummeled the river with cannon-shot, destroying all of the barrels and celebrating their victory in “The Battle of the Kegs.” By the spring of 1788, the Continental Congress agreed to fund further production of barrels. However, the chance to strike again was not forthcoming for Bushnell, as by early 1779 the British were poised to invade Connecticut.

On May 6, 1779, Bushnell was captured in Middlesex, Connecticut, but the British were unaware of his true identity. Through the efforts of Israel Putnam, nine American and nine British prisoners were traded on May 13, including Bushnell. Now aware of the benefits of Continental Army support, he joined the Corps of Sappers and Miners, an engineering division, and became one of three captain-lieutenants in August 1779.5 The work of the Sappers and Miners involved building roads and setting up and manning batteries – including the battery that fired upon Benedict Arnold as he fled West Point. They occasionally saw battle – for example, in the Marquis de Lafayette’s failed capture of Arnold in February 1781. On June 9, 1781, Bushnell was promoted to captain. Continuing their work building infrastructure for the Continental Army, the Sapper and Miners were transported to Yorktown later that year, where they were responsible for digging the American trenches. Some of Bushnell’s Sappers and Miners even fought under Alexander Hamilton in the crucial capture of Redoubt 10, where they were helpful in cutting through its fortifications. Bushnell’s company performed menial tasks until 1783, when he was discharged and reimbursed £150 by the Connecticut government.

After the war, David Bushnell was a founding member of the Connecticut branch of the Society of the Cincinnati.6 Thomas Jefferson wrote to several contemporaries, including General Washington, eager for an account of Bushnell’s work. However, nobody could provide a detailed enough report on Bushnell’s experiments until Bushnell himself replied in 1787, sending an account which was read to and later published by the American Philosophical Society. However, this communication with Jefferson was the last of Bushnell’s interactions with key Revolutionary figures, as he slipped into obscurity. It was rumored that he had traveled to France for work, but no records of this exist. Bushnell disappeared until one David Bush settled in Columbia County, Georgia, in 1790 before moving to Warrenton, Georgia, where he was a physician until his death in 1826. In his 1820 will, he bequeathed all possessions to George Hargraves, revealed that he was in fact David Bushnell, and asked Hargraves to find heirs of his siblings to inherit his estate.

David Bushnell’s contributions to the Revolutionary War and to submarine technology are considerable. His ideas for a screw propeller and to use water as ballast are both still used today. He invented the first working weaponized submarine and was the father of naval mine warfare. The US Navy named two submarine tenders in his honor in 1915 and 1942, the second of which saw active service in World War II. Bushnell has a memorial to his achievements in the cemetery at Warrenton, Georgia, where he is buried.

3. David Bushnell, “General Principles and Construction of a Sub-Marine Vessel, Communicated by D. Bushnell of Connecticut, the Inventor, in a Letter of October 1787, to Thomas Jefferson”, from Transactions of the American Philosophical Society 1799, Volume 4, 303. Accessed September 3rd, 2018. url: https://www.jstor.org/stable/1005110?seq=10#metadata_info_tab_contents

5. David Bushnell, “A Return of the Officers and Privates in the Corps of Sappers and Miners Belonging to the State of Connecticut, July 8th, 1780,” The Society of the Cincinnati Library, Washington, DC.

6. “Capt. David Bushnell”, The Society of the Cincinnati in the State of Connecticut, last modified 2018, http://theconnecticutsociety.org/bushnell-david/

“Capt. David Bushnell.” The Society of the Cincinnati in the State of Connecticut. Last modified 2018. http://theconnecticutsociety.org/bushnell-david/