In February 1786, George Washington created a list of the enslaved people working in his service at Mount Vernon. He listed their location on the estate, work assignment, sex, and age. Washington also indicated status of ownership - whether the enslaved people were his own property, dower slaves belonging to the Custis family, or laborers rented from nearby plantations. He repeated this process again in June 1799, creating another equally detailed slave census.

The end of the American War for Independence in 1783 allowed Washington to return to Mount Vernon to take full stock of his estate. In a letter to Thomas Lewis, he wrote that, "After an absence of almost nine years, and nearly a total suspension of all my private concerns, I am at length set down at home, & am endeavoring to recover my business from the confusion into which it has run during that period."1  One of these responsibilities was the enslaved population on his estate, leading him to create his 1786 census.

On February 18, 1786, Washington set out to make "a list to day of all [his] Negroes which are as follows at Mount Vernon and the plantations around it."2  The 1786 census lists 216 enslaved people at Mount Vernon, 113 of whom were property of the Custis family.3

The “home house” or the mansion had sixty-seven enslaved people in its service. Another four men worked at Washington’s nearby mill. These seventy-one individuals are listed by occupation because life at the “home house” required a number of different tasks. Enslaved laborers at the mansion worked as waiters, cooks, drivers, seamstresses, maids, spinners, gardeners, smiths, knitters, and more. Children accounted for twenty-four of the sixty-seven people laboring at the mansion. Washington listed all children with their families and the land to which they were attached. This suggests that they would eventually take on the responsibilities of their parents. Until then, the children of Mount Vernon likely were given tasks at home while the older members of the mansion’s enslaved community worked from sunrise to sunset. The same can be said for those on the surrounding farms.

The renowned escapee Ona Judge lived on the mansion grounds and is listed as 12 years old in Washington’s 1786 census. Two years earlier she had begun working as Martha Washington’s personal maid and continued to serve her in Philadelphia during Washington’s presidency. From Philadelphia, she ran away from the Washingtons and fled to New Hampshire. Judge continually defeated Washington’s efforts to reclaim her and she remained a fugitive slave for the rest of her life.

The four farms surrounding Mount Vernon featured less labor diversity. Nearly everyone worked as a field hand. Women outnumbered men, with forty-eight working women and thirty-one working men, in addition to sixty-five children. Washington’s 1786 census also includes the names of overseers and their wives. At Muddy Hole, there were fourteen enslaved adults and eleven children. Will, one of the enslaved men at Muddy Hole, served as the overseer for his fellow enslaved laborers. His mother, Doll, was a dower slave who served as a cook in the mansion. In 1785, Will was moved to Muddy Hole to replace Davy Gray, another enslaved man, as its overseer.4 Gray then became the overseer at River Farm and lived there with his wife, Molly. On River Farm, there were twenty-seven other working adults. Twenty-three children also lived on River Farm. On Dogue Farm, there were twenty-two adults including Morris, an enslaved overseer; Hannah, his wife; and Brunswich, who was injured and presumably incapable of work. In addition, there was another disabled man and one elderly woman, both incapable of work. The families there had seventeen children. At Ferry Plantation, later incorporated into Union Farm, there were fifteen enslaved adults. Fifteen children are listed with them.

Two months later, in April 1786, Washington wrote to Robert Morris that "there is not a man living who wishes more sincerely than I do, to see a plan adopted for the abolition of [slavery].5 He did still believe, however, that there were “slaves who are happy & content to remain with their present masters.” When Ona Judge ran away ten years later, Washington reasoned that she had been enticed to leave rather than recognizing the torment of slavery.

In June 1799, Washington completed another major census of the enslaved population at Mount Vernon.6 In the thirteen years since his previous census, Washington had gained another one hundred or so enslaved individuals. This increase was due in large part to natural reproduction. He also rented enslaved people from a woman named Penelope French. Those forty individuals are included in the census alongside the Washington and Custis family enslaved workers. Washington owned 124 individuals outright. Another 153 people were property of the Custis family. In 1799, the number of enslaved individuals at Mount Vernon totaled 317. 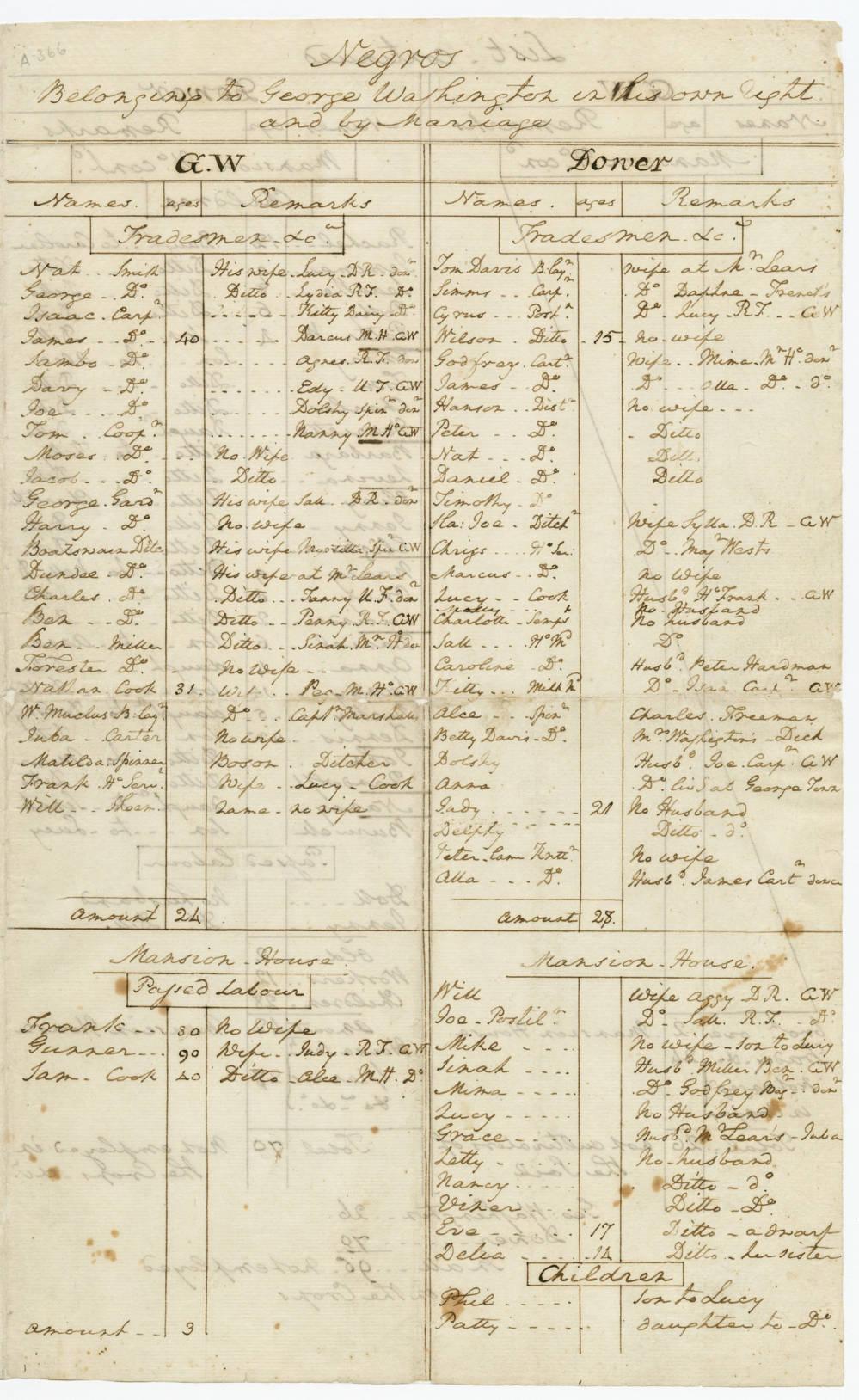 In 1799, there were sixty-four enslaved people living on the mansion grounds, twenty-three of whom were children. At Muddy Hole, there were forty-one individuals. That number included 20 children, two of whom were listed as having already begun to work. Davy Gray had returned from River Farm to work as Muddy Hole’s overseer by 1799. Will was now a laborer at Muddy Hole alongside his wife, Kate, who also served as midwife to the enslaved population at Mount Vernon. At River Farm, there were thirty-one enslaved adults working the grounds. Out of the additional twenty-seven children at River Farm, seven were working. There were twenty-three enslaved adults working the land at Dogue Run. One of these laborers was a woman by the name of Priscilla. Her newborn son, Christopher, was one of the additional twenty-two children living at Dogue Run. His father, Joe, labored at the mansion as a ditch digger and would have had to walk about three miles after work to see his wife and their children. Union Farm had twenty people working its land. These individuals lived alongside their sixteen children. By this time, Washington had also established a distillery, to which he assigned five enslaved men.

Listed among the many enslaved individuals at Mount Vernon in 1799 was an old shoemaker who had become “lame.” He was none other than William Lee, who had famously served as Washington’s valet during the Revolutionary War. Washington’s will, written in July 1799, shortly following the June census, provided for Lee’s immediate freedom upon Washington’s death as well as an annual lifetime pension of $30.7

According to the terms of Washington’s will, the remainder the 123 enslaved people listed in the 1799 census would not gain their freedom until Martha Washington’s death. She freed her husband’s enslaved people in 1801, possibly out of fear for her safety. When emancipated, those too young, old, or infirm to support themselves were to be given support, in accordance with the 1782 Virginia manumission law. As the law also required, children whose parents could not provide for them were to be bound out to yet another master to learn a trade and taught to read and write. It is unclear if these terms were carried out. All the enslaved individuals who belonged to the Custis family remained so, as they were not George Washington’s property. Ona Judge was still a fugitive. Davy, Molly, Will, Kate, and other dower slaves listed in the 1799 census all remained in bondage. Many had deep family and community ties to those now freed.

Thompson, Mary V. “The Only Unavoidable Subject of Regret”: George Washington, Slavery, and the Enslaved Community at Mount Vernon. Charlottesville and London: University of Virginia Press, 2019.