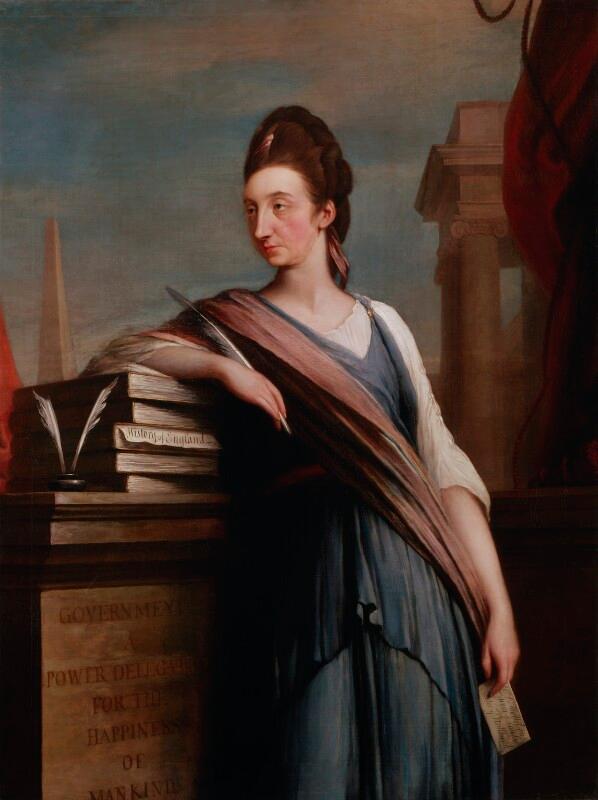 Catharine Sawbridge Macaulay Graham was a prominent English historian and writer at the forefront of radical transatlantic politics in the eighteenth century. She is widely acknowledged as England’s first major female historian and pamphleteer. Graham rose to international prominence for her scholarship and support of the American and French Revolutions. Her commitment to republican ideals endeared her to men such as George Washington and John Adams, while bringing her into conflict with conservative politicians like Edmund Burke. A champion of women’s education, Graham’s work later inspired a new generation of female authors.

Graham was born on April 2, 1731 to John Sawbridge and Dorothy Wanley, a wealthy family in Kent. Her paternal grandfather, Jacob Sawbridge, was a Member of Parliament and a director of the South Sea Company at the time of its collapse. George Wanley, her maternal grandfather, was a successful London banker. In 1733, Dorothy Wanley died in childbirth, leaving Graham and her siblings in a governess’s care. Like other women of her status in England, she received little formal education, but took advantage of her father’s extensive library where she pursued her interests in classical history and politics. Her 1760 marriage to Scottish-born physician George Macaulay helped introduce her to London’s radical literary and political figures. The couple hosted dinners that drew a wide range of individuals including Samuel Johnson, Thomas Hollis, and Richard Baron. Graham and Macaulay had one daughter, Catharine Sophia.

Graham rose to fame with the publication of her first volume of History of England from the Accession of James I to That of the Brunswick Line, which she produced with the assistance of Thomas Hollis. She published the work in eight volumes from 1763 to 1783 and contested David Hume’s History of England, which some readers such as Thomas Jefferson viewed as an apology for Stuart absolutism. Her notably Whig history provided a republican interpretation of the English Civil War, approved of the regicide of Charles I, and aimed at reviving political liberty. Graham emphasized the importance of common law as the foundation of republican values and blamed Oliver Cromwell for destroying England’s commonwealth experiment.

In her other histories and political pamphlets covering the period of the Glorious Revolution of 1688, Graham refuted the monarchical views of Thomas Hobbes and the political conservatism of Edmund Burke. In 1767, she published her first pamphlet, Loose Remarks on Certain Positions to be Found in Mr Hobbes’ Philosophical Rudiments of Government and Society, which argued against Hobbes’ theory of monarchical government and promoted a “democratical republic” as the “only form of government….capable of preserving dominion and freedom to the people.”1 In 1770, Graham published her first attack on Burke, Observations on a Pamphlet entitled “Thoughts on the Cause of the Present Discontents.”

Throughout her adult life, Graham was associated with the radical Wilkites and the Real Whigs in British politics. Along with her brother, John Sawbridge, Graham was a notable supporter of Middlesex County representative John Wilkes after the House of Commons expelled him for publishing seditious and obscene libels. The Middlesex Affair led Graham to establish a network of correspondence with a variety of American radicals, including Benjamin Rush, Benjamin Franklin, Richard Henry Lee, Samuel Adams, and John and Abigail Adams.

Graham disagreed with the British government’s policies toward the American colonies in the years before the American Revolution. By the early 1770s, she saw little chance that Parliament would alter its approach to British America.

As early as 1773, Graham predicted that the British government would fail to address colonial grievances, and that independence was inevitable. She believed that legislation such as the Coercive Acts and the Quebec Act were glaring examples of corruption and abuse of power within the British government. Her fear that the imperial union would collapse compelled her to make her first, and only, public statement on the colonial crisis. In An Address to the People of England, Ireland, and Scotland (1775), Graham suggested that with conciliatory trade policies, revenues could be raised, and Americans could continue to “contribute all in their power towards the welfare of the empire.”2  The Americans had born Parliamentary intrusions “with an almost blameable patience” in an “anxious desire of preserving that harmony which had so long and so happily subsisted between the Parent State and her Colonies,” but the ministry’s actions had “raised a spirit beyond the Atlantic” that the British might never quell.3 She warned that the alternative would lead to war with France and Spain, the loss of American revenues, and the colonies themselves.

Privately, Graham communicated her support to American Revolutionaries such as John Adams. “You will see how strenuously and ever zealously my Brother Mr. Sawbridge defended the injured rights of America,” in Parliament she wrote to Adams in 1774.4 Adams received updates on British politics from Graham. He introduced her to Massachusetts polemicist and historian Mercy Otis Warren. The two authors became close friends and correspondents.

George Macaulay died in 1766. Graham moved to Bath in 1774 where she lived in the home of Dr. Thomas Wilson, a prebendary of Westminster in Bath. In 1778, the forty-seven-year-old Catharine married William Graham, the twenty-one-year-old younger brother of her physician. The age difference, and rumors of an affair with her now brother-in-law, exposed her to ridicule. That same year, she published the first volume of The History of England from the Revolution to the Present Time, in a Series of Letters to the Reverend Doctor Wilson, which damaged her reputation in certain Whig circles. She argued that the English Civil War had been a missed opportunity to eliminate the crown’s prerogatives and without proper restraints on the crown’s power, Parliament could become a tool of court policy. The book proved too radical for the moderate elements of the Whig Party, which began to distance themselves from some of her extremer positions. In 1783, Graham published Treatise on the Immutability of Truth, in which she espoused her belief in moral truths and articulated a doctrine of the will she called “moral necessity.” 5

After the American Revolution, Graham was a visible ally of the new United States. Americans hoped that she could promote the new nation’s reputation on the world stage. In 1784, she and her husband traveled to the United States for a year-long visit where they were received by such figures as John and Abigail Adams, Richard Henry Lee, James Monroe, and Benjamin Rush. In June 1785, the Grahams began a ten-day stay at George and Martha Washington’s Mount Vernon. During their visit, Washington permitted Graham to examine his military records. The visit spurred a small correspondence between Graham and Washington over the next few years. Washington, writing in response to a 1789 letter congratulating him on his election as the first president under the new federal Constitution, confided in Graham his concerns about the challenges that lay ahead. He now walked “on untrodden ground,” he wrote. “There is scarcely any part of my conduct which may not hereafter be drawn into precedent” or subject to constant interpretation.6

Shortly after this trip, Graham abandoned plans to write a history of the American Revolution as her health declined. She instead focused on metaphysics and education. In 1790, she published Letters on Education, which argued for the equal education of upper-class women and men. She refuted scholars such as Jean-Jacques Rousseau and her old adversary Edmund Burke in rejecting the idea of innate differences between the sexes. The persistent ancient notion of female inferiority had led to the destruction of “all the natural rights of the female species, and reduce[d] them to a state of abject slavery.”7 The work influenced Mary Wollstonecraft, who reviewed it positively and published A Vindication of the Rights of Women five years later.

Shortly before her death, Macaulay returned to politics to endorse the French Revolution. In particular, she defended the French National Assembly and the concept of popular government in Observations on the Reflections of the Right Hon. Edmund Burke, on the Revolution (1790). She died on June 22, 1791.

1. Catharine Macaulay, Loose Remarks on certain positions to be found in Mr Hobbes’s “Philosophical rudiments of government and society,” with a short sketch of a democratical form of government, In a letter to Signor Paoli, 2d ed. (London, 1769), 35.

2. Macaulay, An Address to the People of England, Scotland, and Ireland, on the Present Important Crisis of Affairs (London: Printed for Edward and Charles Dilly, 1775), 26.

5. Catharine Sawbridge Macaulay Graham, A Treatise on the Immutability of Moral Truth (London: A. Hamilton, 1783), 232.