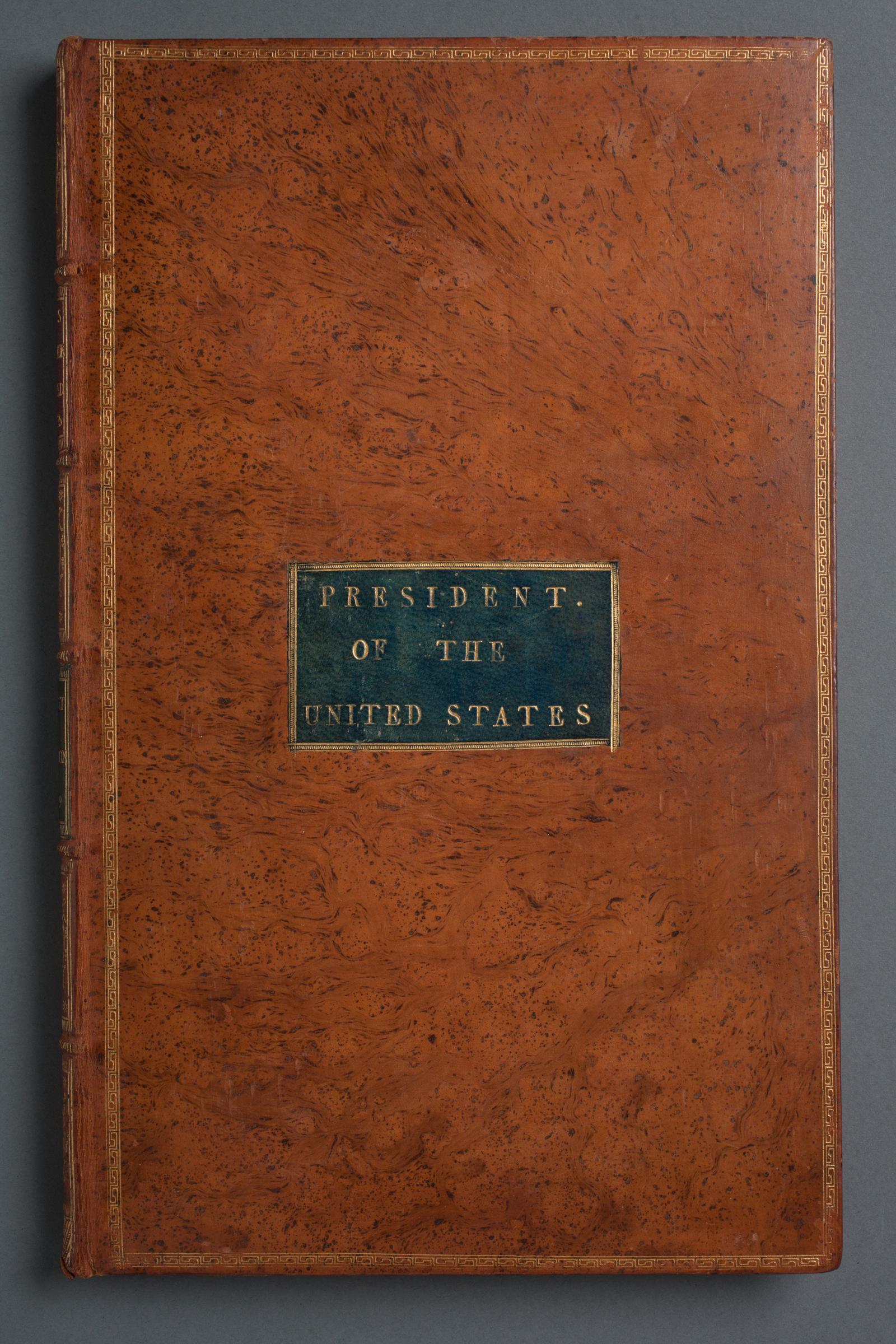 In the fall of 1789, the First Federal Congress adjourned after its first session. Before leaving New York City to conduct his tour of the northern states, President George Washington placed a very important order with Francis Childs and John Swaine, the official printers of the United States.1 This designation granted Childs and Swaine the right to print all of the official legislation and documents for Congress, the Supreme Court, and the Executive Branch. Washington ordered ten leather-bound copies of the Constitution and all of the legislation passed by the First Federal Congress. After Childs and Swaine printed the sheets, they transferred the documents to New York book binder John Allen, who bound them in tree calf leather. Allen also added a plaque put on the front of Washington’s copy, reading “President of the United States” and printed a label on the spine reading “Acts of Congress.”2 Washington had a similar volume made for his department secretaries, Chief Justice John Jay, and the Association Justices. Each text had a plaque stating its owner’s title.3 After returning from his trip, Washington retrieved his volumes from the printer and gifted them to their intended recipients.4

Each fall, Washington ordered an updated volume with the new legislation passed during the prior term. At the end of his presidency, Washington brought all seven volumes home to Mount Vernon and placed them in his private study.

At some point, Washington scrawled a few notes in the first volume. He left no record of when he annotated the text, but the most likely option is in early 1790. At that time, he was preparing his annual address to Congress, now known as the State of the Union, and probably reviewing the instructions included in the Constitution. He likely would not have made the notations after fall 1790, because he would have had an updated volume and no reason to turn to an outdated version. So sometime between late October 1789 and fall 1790, Washington wrote in the book.5

There are two notations that are especially important. On page ix, in the margins next to Article II, Section 2, he wrote “president powers” next to the clause stating that the president may request written advice from the department secretaries and that the Senate shall advise and consent on the treaties. Next to the following clause in Article II, Section 3, Washington wrote “required” adjacent to the lines that stated that the president shall make regular updates to Congress on the state of the union.6 These notations suggest that he distinguished between what he must do (report to Congress) and what he could do (get written advice from the department secretaries and meet with the Senate). 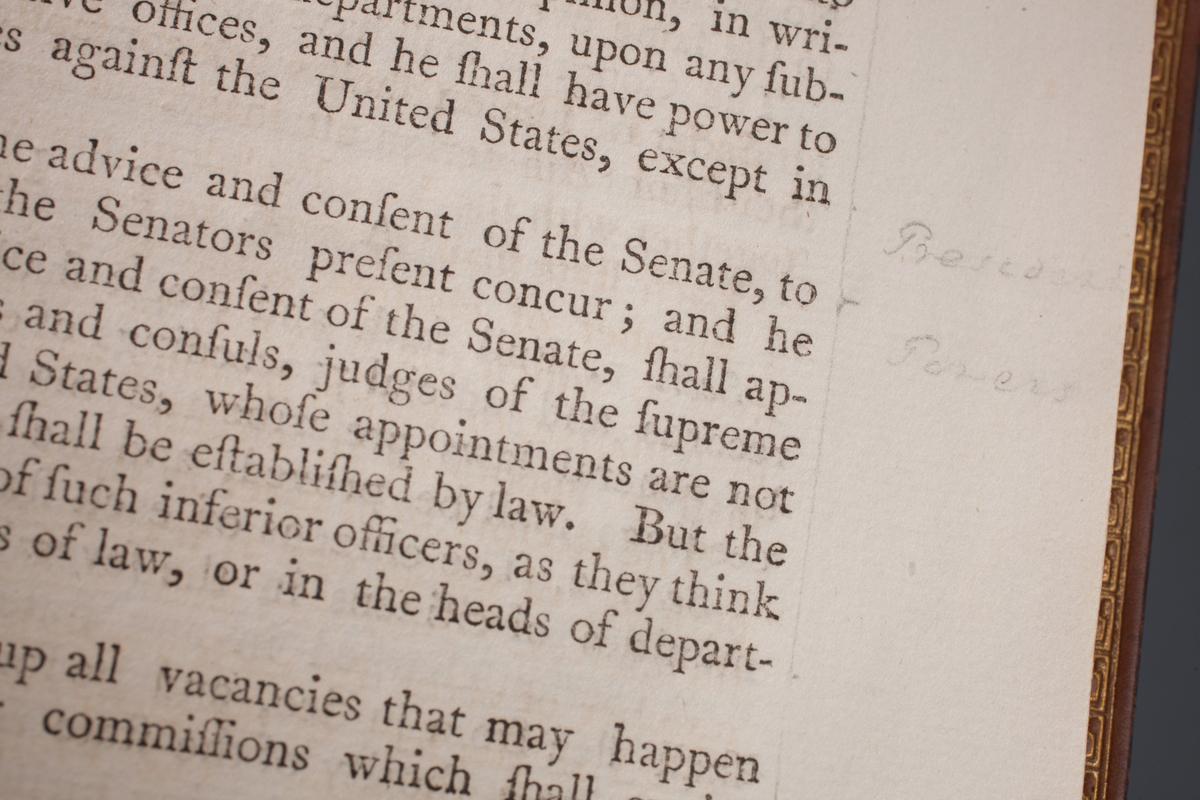 Washington did not explain what he meant by these notations. Unlike men like John Adams, who inscribed the books in their libraries with copious marginalia that made their opinions clear Washington hardly ever wrote in his books. But his actions in the first year of his presidency provide a few clues. A few months earlier, in August 1789, Washington had visited the Senate to ask for advice for the first time. He had nominated a peace commission to meet with representatives from the Creek Nation and North and South Carolina, but he wanted the Senate’s advice about the instructions he should send and the scope of the mission.

Prior to the meeting, Washington had sent all existing treaties, met with a Senate committee to plan his visit, and brought acting Secretary of War Henry Knox to answer any questions. Despite his preparations, the senators declined to debate the issue or answer his questions. Instead, they requested additional time to discuss the matter in committee and asked that the president return in a few days. Washington lost his famous composure and yelled at the senators for wasting his time, before ultimately agreeing to return the following Monday. Although he came back a few days later, he decided that the Senate was ill-equipped to serve as advisors on foreign affairs. When facing a diplomatic crisis, he needed immediate advice and support—he couldn’t wait for senators to deliberate.

Later that fall, Washington also started meeting privately with the secretaries of the executive departments. He initially limited his interactions to written correspondence as required by Article II, Section 2, but quickly discovered that the issues on his desk were too challenging to be handled through parchment and quill alone. Instead, Washington and the secretaries exchanged letters and then they would meet to discuss follow-up questions or revisions.

These meetings and Washington’s rejection of the Senate suggest that he was experimenting with new ways to respond to emerging challenges. The cabinet was the culmination of this creative process. On November 26, 1791, Washington convened the first cabinet meeting—two and half years into his presidency. Contrary to popular belief, the cabinet did not exist from day one of Washington’s administration The Constitution created no such body. In fact, the delegates to the Constitutional Convention specifically rejected a proposal that would have created an executive council that looked almost identical to the future cabinet. Instead, the delegates expected the president to consult with the Senate on foreign affairs and the secretaries to provide advice on matters pertaining to their departments.

After his death on December 14, 1799, Washington bequeathed his “library of Books and Pamphlets of every kind” to his nephew Bushrod Washington, an Associate Justice of the Supreme Court. This collection included all seven volumes of the Acts of Congress.7 The inventory of Washington’s belongings compiled after his death valued the annotated Acts of Congress at $.75.

The volume then changed hands a number of times over the next century. On November 28, 1876, M. Thomas & Sons, an auction house in Philadelphia, sold the volume to C.H. Hart for $13.00. In April 1892, the volume was sold again, this time at Birch’s, to Mrs. Phoebe Hearst for $1150.00. The volume was passed down in the Hearst family and once belonged to William Randolph Hearst. After it was acquired by the Heritage Foundation in Massachusetts, Richard Dietrick, Jr. acquired the volume at Parke Bernet on November 17, 1964. Finally, on June 22, 2012, the Mount Vernon Ladies’ Association purchased the volume for $ 9,826,500.00 and it returned to Mount Vernon, almost 136 years after it left.

___. The Cabinet: George Washington and the Creation of an American Institution. Harvard University Press, 2020.