George Washington served in the Virginia House of Burgesses for fifteen years before the American Revolution. After a failed bid for a seat in December 1755, he won election in 1758 and represented Frederick County until 1765. That year he ran in Fairfax County, winning a seat which he would retain until 1775. 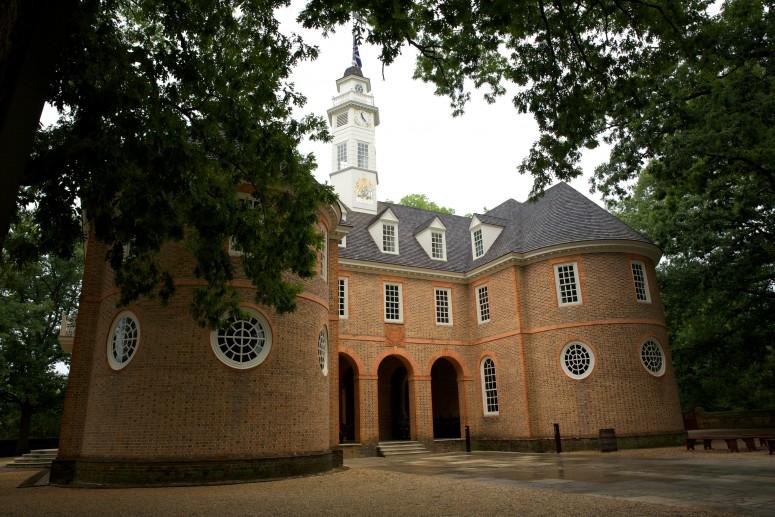 During his tenure, Washington was not an outspoken burgess, nor did he introduce expansive or innovative legislation. Meeting in Williamsburg with elder statesmen such as John Robinson, Peyton Randolph, and George Wythe, as well as newer burgesses such as George Mason, Patrick Henry, and Thomas Jefferson, Washington learned to navigate political spheres and began his lessons in statecraft.

With its origin in the first meeting of the Virginia General Assembly at Jamestown in July 1619, the House of Burgesses was the first democratically-elected legislative body in the British American colonies. About 140 years later, when Washington was elected, the electorate was made up of male landholders. Voters and burgesses had to be at least twenty-one years of age.

Each county sent two representatives and elections were held when the governor called them, not at regular intervals. Votes were cast viva voce, or by voice, the voters standing in front of the crowd to say the name of their chosen candidates out loud to be recorded by the sheriff. Sometimes raucous events, election days often found voters plied with alcoholic beverages and food by candidates. Washington, in fact, paid for food and drinks to be provided for voters during at least some of his winning elections.

The House was presided over by a Speaker and functions were carried out by committees. Washington served on the standing committees of Propositions and Grievances, Elections and Privileges, and Religion, as well as being placed on various committees to write bills or negotiate with other groups. Much of the House’s business was evaluating petitions from the public for specific interventions. Early in Washington’s career, he was placed on committees to evaluate the petitions of men who had served in the French and Indian War.

In the years leading up to the Revolution, the House was entrenched in the American struggle with the British government. In the 1760s the House asserted its sole authority to tax Virginians. In May 1774 at the last session of the House that Washington attended, burgesses called for a day of "fasting, Humiliation and prayer," to show support for Boston inhabitants subjected to the acts designed by Parliament to punish them for the Boston Tea party.1

To Washington’s surprise, Governor Dunmore promptly dissolved the House. Many of the burgesses, including Washington, met the next day to sign a non-importation association. Three days later Washington joined the burgesses remaining in Williamsburg to sign a resolution calling for a meeting in August which would become the first Virginia Revolutionary convention. The membership of the five Revolutionary conventions was almost entirely made up of burgesses.

Dunmore did not call the House again until June of 1775. The House adjourned on June 24 and never again achieved a quorum (enough members to conduct business). The last entry in the House journal, written on May 6, 1776, proclaims, "Several Members met, but did neither proceed to Business, nor adjourn, as a House of Burgesses. FINIS."2 Later that morning the final Revolutionary convention met in the House chamber and adopted the first constitution of the commonwealth of Virginia which established the House of Delegates as a the lower house of the General Assembly. While Washington commanded the continental army in New York, about four hundred miles south in Williamsburg, the end of the House of Burgesses signaled the end of British political rule in Virginia.

Bibliography:
Stoermer, Taylor, "'What Manner of Man I Am': The Political Career of George Washington Before the Revolution," in ed. Edward Lengel, A Companion to George Washington. Hoboken, NJ: Wiley-Blackwell, 2012, 121–136.