17 people tried to liberate themselves from Mount Vernon in 1781. 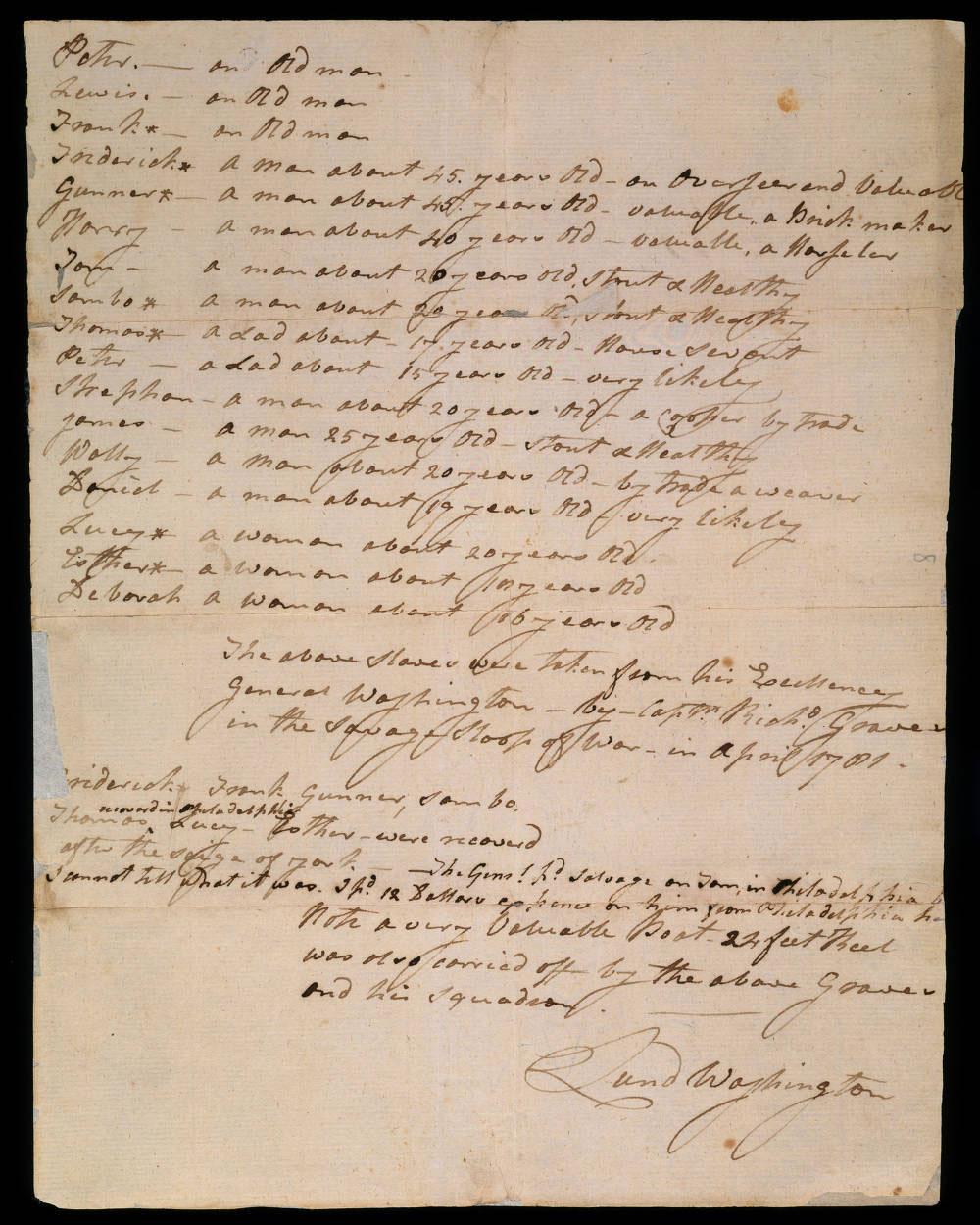 A list with short descriptions was made sometimes after. Peter, Lewis, and Frank were all described as old men. Frederick, an overseer, and Gunner, a brick maker, are noted as being valuable and about 45 years old. Harry was listed as about 40 years old, valuable, and a “Horseler”. James, 25, Tom, 20, and Sambo, 20 were all called “stout & healthy”. Stephen, a cooper, and Wally, a weaver, are also listed as about 20 years old. Thomas is listed as a 17-year-old lad who worked as a house servant. Peter, 15, and Daniel, 19, are both described as “very likely”. No descriptors other than age are included for the women: Lucy about 20, Esther about 18, and Deborah about 16.2

It might seem like running towards the British, under which slavery was still legal, wasn’t a good idea. However, six years earlier John Murray, fourth Earl of Dunmore, issued a proclamation which essentially offered “Freedom to All Indented Servts & Slaves (the Property of Rebels) that will repair to his majesty Standard-being able to bear Arms.”3 This meant that if the 17 people safely made it to the Savage, they could join the British in their fight against the rebels and would be freed.

…but that which gives most concern, is, that you should go on board the enemys vessels & furnish them with refreshments. It would have been a less painful circumstance to me, to have heard, that in consequence of your non compliance with their request, they had burnt my House, & laid the Plantation in Ruins. You ought to have considered yourself as my representative, and should have reflected on the bad example of communicating with the enemy and making a voluntary offer of refreshment to them with a view to prevent a conflagration.5

It is not easy to discover what happened to each person after they left Mount Vernon. Thomas made it as far as Philadelphia before he was captured. He, along with Fredrick, Frank, Sambo Anderson, Lucy, Ester, and Gunner were forced to return to Mount Vernon sometime after the siege at Yorktown.6 Harry Washington, Daniel Payne, and Deborah Squash are included in the records of people transported to Nova Scotia, Canada by the British at the end of the Revolution.7 Harry migrated to Sierra Leone and fought in a revolution against the colonial government.8 Of the remaining seven, some may have died of disease during the war, while others might have gone on to a life of freedom. Sadly, at this time, we have no further record of Peter, Lewis, Tom, Peter, Stephen, James, or Wally.

1. Lund Washington, “List of slaves returned from British, 1781.” The Washington Library, catalog.mountvernon.org/digital/collection/p16829coll13/id/153. These 17 people are listed by Lund Washington, the document goes on to say “The above slaves were taken from his Excellency General Washington – by – Captin Rich. Graves in the Savage sloop of war – in April 1781” However, there is uncertainty as to when this list was written and if all 17 people actually fled on the Savage. Harry Washington says he escaped in 1776 and Deborah Squash ran away in 1779. Also see Mary V. Thompson, “The Only Unavoidable Subject of Regret”: George Washington, Slavery, and the Enslaved Community at Mount Vernon (Charlottesville: University of Virginia Press, 2019) 439 and Cassandra Pybus, “Washington’s Revolution,” Atlantic Studies, Vol. 3 No. 2, October 2006, doi.org/10.1080/14788810600875414.